BEIJING -- The United States will continue to seek the extradition of jailed technology executive Meng Wanzhou, the U.S. Department of Justice confirmed Tuesday, news that intensifies a high-stakes dispute between China and the United States.

Meng, who is chief financial officer for Huawei Technologies, was arrested in Vancouver, British Columbia, on Dec. 1 on fraud charges related to U.S. sanctions law. Not long after, Chinese authorities detained two Canadian men on security charges, widely seen as retribution for Canada's arrest of Meng.

China on Tuesday demanded that the United States drop the extradition request, shifting blame to Washington in a case that has damaged Beijing's relations with Ottawa.

Foreign Ministry spokesman Hua Chunying said Meng's case was out of the ordinary and that Canada's extradition treaty with the United States infringed on the "safety and legitimate rights and interests of Chinese citizens."

The standoff has left Canada caught between its extradition obligations to the U.S. and the anger of China which has warned of unspecified consequences should Canada proceed with the case against Meng or take action against her company.

Canadian officials have stressed that Meng's case is a legal matter, not a political one, a message reiterated by the U.S. Department of Justice on Tuesday.

"We will continue to pursue the extradition of defendant Ms. Meng Wanzhou, and will meet all deadlines set by the US/Canada Extradition Treaty," Marc Raimondi, a spokesman for the Department of Justice, said in a statement. "We greatly appreciate Canada's continuing support in our mutual efforts to enforce the rule of law."

News that the United States will indeed meet a Jan. 30 deadline to request Meng's extradition suggests the conflict over her case will stretch on as Canadian courts consider the extradition case and process possible appeals.

It also comes amid growing concern about the safety of Canadian citizens in China.

On Tuesday, more than 140 academics and former government officials wrote an open letter to President Xi Jinping, saying the detention of two Canadians in China is making academics and others cautious about traveling to the country.

They called for the immediate release of the two men, Michael Kovrig and Michael Spavor, who have been held without access to lawyers or family members since being arrested more than a month ago on accusations of "endangering national security."

"We who share Mr. Kovrig's and Mr. Spavor's enthusiasm for building genuine, productive and lasting relationships must now be more cautious about travelling and working in China and engaging our Chinese counterparts," the signatories wrote in the letter, which was first published in Canada's Globe and Mail but was sent to other media outlets.

"That will lead to less dialogue and greater distrust, and undermine efforts to manage disagreements and identify common ground. Both China and the rest of the world will be worse off as a result," they wrote.

Kovrig is a former Canadian diplomat who has been working as the China analyst for the International Crisis Group, an organization with a mission to "build a more peaceful world."

He was arrested in Beijing on Dec. 10 and has been held since then in a detention center, in solitary confinement with the lights on 24 hours a day. He has been questioned about his previous work as a diplomat, leading Canadian Prime Minister Justin Trudeau to say Beijing was not respecting diplomatic immunity.

Spavor was based in Dandong, a city on the Chinese border with North Korea, where he ran Paektu Exchanges, an organization promoting cultural exchanges and business relationships with North Korea. A fluent speaker of Korean, he arranged one of former basketball star Dennis Rodman's trips to North Korea and has spent extended periods of time with leader Kim Jong Un.

Spavor has been held in circumstances similar to Kovrig's in a detention center in Dandong, where he is being interrogated about his work.

The signatories to the letter include former U.S. Ambassadors to China Gary Locke and Winston Lord, and the Asia director on former President Barack Obama's National Security Council, Evan Medeiros.

Others who signed include Bonnie Glaser and Scott Kennedy from the Center for Strategic and International Studies; Elizabeth Economy from the Council on Foreign Relations; Orville Schell of the Asia Society; and Ely Ratner of the Center for a New American Security.

The kinds of meetings and exchanges that Kovrig and Spavor had promoted, the letter said, were "the foundation of serious research and diplomacy around the world, including for Chinese scholars and diplomats."

The detentions of the two men "send a message that this kind of constructive work is unwelcome and even risky in China," they wrote.

President Donald Trump has suggested that he might be willing to make a deal to release Meng if China gives in to his demands in the countries' trade war -- provoking a rebuke from Canada, which said the arrest was not for political gain.

Information for this article was contributed by Christopher Bodeen of The Associated Press. 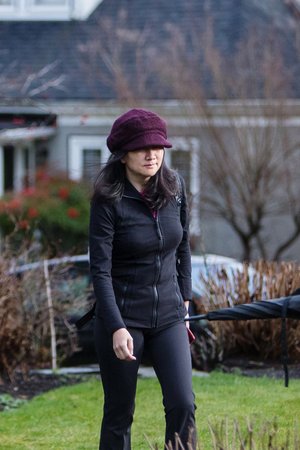 Meng Wanzhou, CFO of Huawei Technologies, leaves her home while out on bail in Vancouver, British Columbia, on Thursday, Jan. 10, 2019. Bloomberg photo by Ben Nelms.

Print Headline: U.S. refuses to yield on bid for extradition of Chinese executive