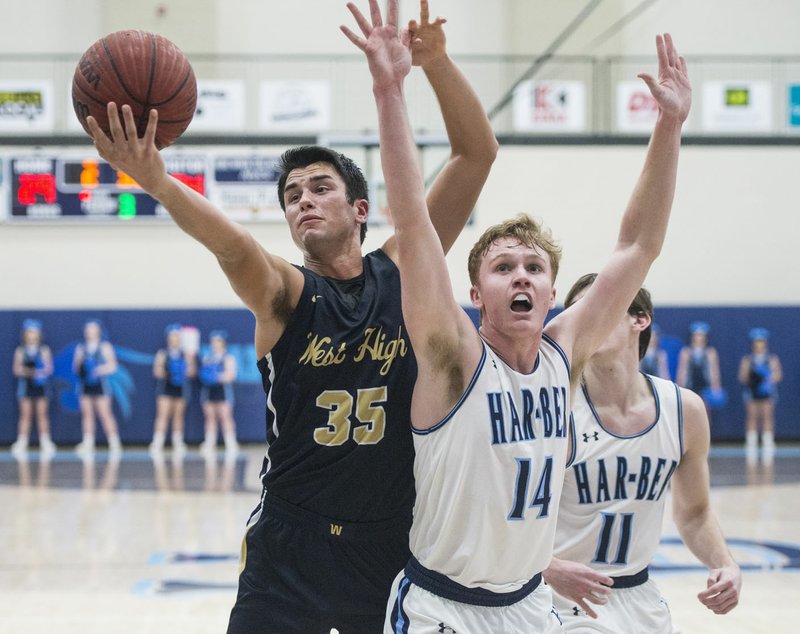 SPRINGDALE -- Springdale Har-Ber didn't let the disappointment of a road loss at rival Springdale follow with another loss at home.

"I feel like we've been through a fight, about a 15-rounder," Har-Ber coach Scott Bowlin said. "I knew we'd come off flat because of [last] Friday after playing Springdale. But this is the type of game you've got to win."

Jenkins led Har-Ber (6-8, 2-2) in scoring again but the Wildcats needed other players to emerge with the 6-foot-5 junior in foul trouble. Nick Buchanan took over during stretches in the second half and finished with 13 points. Cole Bishop provided two 3-pointers and Brennon Gibson made six consecutive free throws during the back-and-forth game. 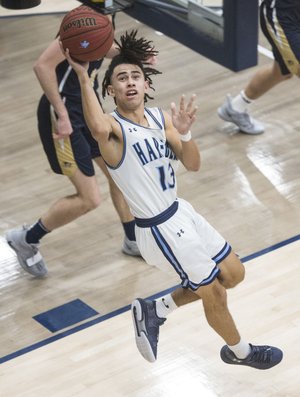 Har-Ber led 24-21 at halftime with Jenkins and Buchanan combining for 18 points. But Dillon Bailey used his quick hands on defense and his ability to finish drives to the basket to put West ahead 32-26 in the third quarter.

Jenkins picked up his fourth foul early in the fourth quarter. But he and Gibson combined to make four consecutive free throws to put Har-Ber ahead 51-46 with about one minute to play.

Dawson Bailey scored 18 and Dillon Bailey 14 for the Wolverines (6-11, 0-4), who remain winless in conference play.

Fayetteville put together a 14-1 run in the first half to pull away from Bentonville, and the Bulldogs prevailed in a game of 6A-West co-leaders in Tiger Arena.

Fayetteville (13-3, 4-0) closed out the first quarter with nine straight points, including a 3-pointer by Bryson Wright with 2 seconds remaining, and owned a 20-10 lead. The Purple'Dogs then followed a Michael Shanks free throw with six straight points and extended their lead to 25-11 after Colin Cooper's bucket with 4:19 before halftime.

"I think the tempo was the key in the first half," Fayetteville coach Kyle Adams said. "I did a poor job subbing and should have got more kids in to get us rested. I think Collin and Isaiah got a little tired in the second half.

"You come in here and play a great team like Bentonville and have a chance to win -- not just win but win by 10 -- we'll take that any time."

Tamaury Releford had 13 of his 15 points in the third quarter to lead Fayetteville while Cooper and Isaiah Releford added 11 apiece. Shanks had 14 and Brayden Freeman 12 for Bentonville, which had a six-game win streak snapped.

Fayetteville's win coupled with Rogers' win over Springdale gave the Purple Bulldogs sole possession of first place in the league.

Carpenter's final points of the night came on two made free throws with 26 seconds remaining in the extra period to increase the War Eagles' lead to 49-43.

"You know, that first one is the hardest one to get," Heritage coach Tom Olsen said after the final buzzer. "And really hard on the road.

Junior guard Logan Clines led the War Eagles with 18 points, including nine in the first half. Heritage held a slight 20-18 advantage at the intermission. Jason Kimball added 11 for the visitors, including three triples from behind the arc.

Brayden Gilmore poured in a game-high 23 points for Van Buren, including a put-back dunk early in the second quarter. Logan Brother drained four 3-pointers for the Pointers to tally his 12 points.

The Mounties scored the final eight points of the first half and never trailed the rest of the way.

Drew Miller scored all eight points in the Mounties' 8-0 run, which snapped a 21-21 tie. Miller's 3-pointer with 3 minutes, 34 seconds left in the third quarter gave his team a 24-21 lead it would not relinquish.

Springdale (9-6, 3-1) put together a charge late when Rogers misfired from the free throw line late, cutting a 14-point deficit to as few as six.

But senior Will Voigt hit four straight free throws in the waning seconds to put the game away.

Rogers coach Lamont Frazier likes the progress his young team is making. The Mounties' 13 wins is the most since the 2011-12 season when they finished 18-9.

"Our younger guys are continuing to improve," Frazier said. "I thought early on when they made the surge, our runs came with some of our youngest guys on the floor. That says a lot about them and the fact they're mature enough to handle these situations."