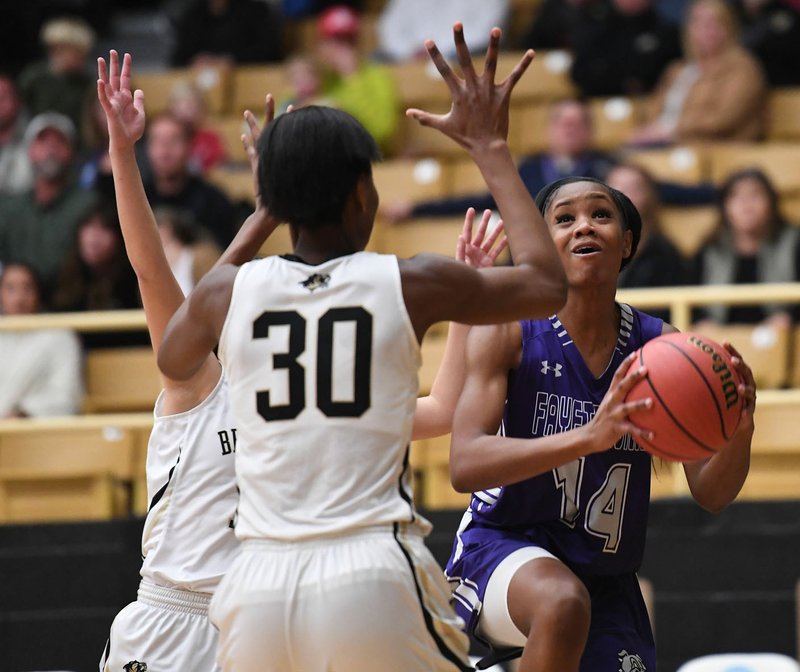 BENTONVILLE -- Coriah Beck wasn't able to contribute as much as she liked Tuesday night because she had to deal with foul trouble.

The final 1.9 seconds was just enough for her to give Fayetteville's girls the victory.

The junior guard drove toward the bucket, and her bucket at the buzzer gave the Lady Bulldogs a 41-40 victory over Bentonville in the battle of 6A-West Conference leaders in Tiger Arena.

"I went for the layup and thought I was going to get fouled," Beck said. "But I made the shot. I knew I could get past the girl, but I wasn't sure I could make the shot around the big girl. I wasn't sure it was in the basket until it went in, and my teammates went to the floor."

Beck finished with only 7 points, but four of them came in the final 2 minutes. Her bucket with 1 minute, 32 seconds left gave Fayetteville (11-2, 4-0 6A-West) a 39-38 lead. Bentonville (14-3, 3-1) then elected to hold the ball until the final seconds before Avery Hughes drove the lane and fed to Maryam Dauda, whose jumper with 3.5 seconds left gave the Lady Tigers a 40-39 edge.

Fayetteville was not in the one-and-one at the time, and Bentonville used two fouls -- on with 2.6 seconds on the clock and again with 1.9 seconds left. Bentonville could have fouled again but chose not to, and Beck was able to make her move for the winning bucket.

"That was two great players making two great plays at the end," Fayetteville coach Vic Rimmer said. "Maryam had a beautiful J, and we were guarding her.

"We executed twice, but the third was just to make the play. The first two sets we had were something we work on, and they did a good job of fouling. Coriah just had to make a play."

Sasha Goforth had 17 points to lead Fayetteville, 13 of them in the first half while Beck and freshman Hatianna Releford dealt with foul trouble, and Releford added 10. Hughes had 14 to pace Bentonville, while Dauda added 11.

"Hey, we played tough for 31 minutes," Bentonville coach Tom Halbmaier said. "It just came down to the last possession and the last opportunity.

"It was one of those deals when the game happens so fast. I was to the point where wasn't a whole lot of time left. If they catch a ball and shoot and we foul, then they go to the line. In that situation, it was tough to do that."

Har-Ber got to within 52-51 on a 3-pointer by freshman Caylan Koons with 26 seconds left to play. But a drive by Kania Starks that would've tied the game seconds later rolled off the rim and West (6-10, 1-3) held on for the road win.

Kash had nine points in the second quarter when West used a 15-2 run to take a lead 29-18 at halftime. Kelsey Wood made two 3-pointers and Kash added a three and four consecutive free throws to ignite the surge.

Kash made a 3-pointer while closely guarded to prompt a Har-Ber timeout with the Lady Wildcats trailing 25-13 late in the second quarter. But Har-Ber regrouped and made it a close game by outscoring West 21-8 in the fourth quarter.

"Anna Kash is a workaholic and a great player to have at the point [guard] position," West coach Randy Richardson said. "At the end, I'm strapped to the seat and out of timeouts and Anna took it upon herself to get the ball and do what she needed."

The Lady Bulldogs turned some tough defense into easy baskets to pull away from Rogers in the second half and notch a big 6A-West Conference road win on Tuesday night.

Springdale (9-4, 4-0) led 29-20 at halftime, but outscored Rogers 20-7 to begin the second half to take command. Many of those points came in transition keyed by Lady Mounties' turnovers.

Springdale coach Heather Hunsucker couldn't have been happier with her team's defense.

"But as a senior that's been in this league since she was a sophomore. You really hope in these road games, that's where these seniors step up And I thought our seniors stepped up tonight."

The Pointers put the pressure on early, getting into a quick offensive flow to secure their first 6A-West victory of the season in Citizen's Bank Arena.

Junior guard Lexi Miller paced the Pointers (8-9, 1-3 6A-West) with a game-high 13 points, to go along with her six rebounds and four assists.

Miller and backcourt-mate Rylee Ryan each connected on a pair of 3-pointers in the first quarter to spark Van Buren at an early 18-7 lead. Brooklyn Kennedy scored five of her 11 points in the second quarter to help extend the lead to 29-14 at the break.

"It was just a sigh of relief seeing our kids be able to relax on the floor and play the way they are capable of playing," Pointer coach Chris Bryant said. "Obviously, I am happy to get the win, but I am more excited to see us play with some flow, offensively."

Heritage (4-12, 0-4) was able to outscore the Pointers 13-9 in the fourth quarter, as Pam Seiler and Faith Cornog hit 3-pointers. Skylar Brooks led the War Eagles with six points, including 4-for-4 at the free-throw line.

Emmalee Greebe chipped in 10 for the Pointers.