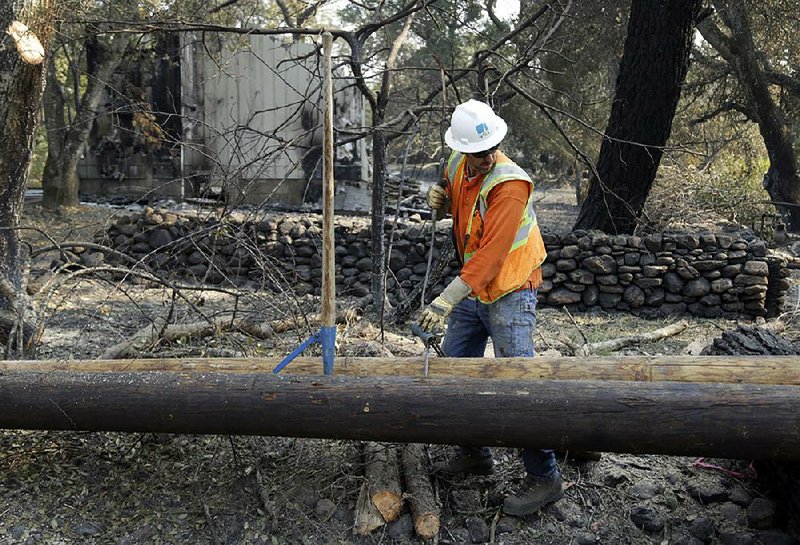 A Pacific Gas and Electric worker replaces power poles destroyed by an October wildfire in Glen Ellen, Calif. The potentially large liabilities over deadly California wildfires is forcing the utility to file for bankruptcy.

California's largest power company intends to file for bankruptcy as it faces tens of billions of dollars in potential liability after wildfires that have devastated parts of the state over the past two years, according to a filing with the Securities and Exchange Commission.

Pacific Gas and Electric said Monday that declaring insolvency is "ultimately the only viable option to restore PG&E's financial stability to fund ongoing operations and provide safe service to customers."

The California wildfires, which have killed dozens of people and destroyed thousands of homes, have led to a surge in insurance claims. PG&E estimates that it could be held liable for more than $30 billion, according to the SEC filing, not including potential punitive damages, fines or damages tied to future claims. The company's wildfire insurance for 2018 was $1.4 billion.

The company has about 5.4 million electric customer accounts and 4.3 million natural gas customer accounts, representing about 16 million people, the company website says. It has about 20,000 employees in its 70,000-square-mile service area in northern and central California

The PG&E bankruptcy promises to be more complex and political than most bankruptcies, pitting fire victims, ratepayers, bankers and renewable-energy providers against one another.

Solar and wind energy providers are among those who could suffer. In its drive to make the state electricity grid free from carbon dioxide emissions, California has pushed utilities to buy renewable energy. But Gabe Grosberg, a utilities analyst at S&P Global, said Monday that "many of the power contracts are above market price" and a renegotiation of those contracts "is something the bankruptcy judge will take a look at."

The company said financial alternatives to bankruptcy would not serve the best interests of PG&E and its shareholders and "would not address the fundamental issues and challenges PG&E faces." Among the many considerations that pushed the company closer to bankruptcy were the need to resolve its potential liabilities, extensive rebuilding efforts and "the significant increase in wildfire risk resulting from climate change," PG&E said.

The filing comes a day after the company announced the resignation of its chief executive, Geisha Williams. Williams, three other top executives who resigned last week and the company have come under harsh criticism in recent weeks over the utility's corporate culture. The president of the California Public Utilities Commission had in November widened his investigation of PG&E to include its "safety culture" more generally.

"In our opinion, [PG&E] has significant organizational and leadership problems that have eroded the utility's trust capital in Sacramento," the investment advisory firm Height Securities said in a note at the time.

The company was already on federal probation as a result of a 2010 natural gas pipeline explosion in San Bruno, Calif., that exposed violations of the federal Natural Gas Act and obstruction of justice. The five-year probation period runs through this year.

PG&E said it was required to give employees at least 15 days notice before it filed for bankruptcy, which it plans to do "on or about" Jan. 29.

PG&E said that as of last week it had about $1.5 billion in "cash or cash equivalents on hand" and was in discussions with "a number of major banks" to secure more than $5 billion to fund its ongoing operations as it seeks bankruptcy protection.

Few politicians want to rush to the defense of a big utility, but many policy experts argue that PG&E wouldn't be in this position if it weren't for an unique California legal standard that makes utilities strictly liable for damages from wildfires linked to their equipment even if the utilities were not negligent or unreasonable.

PG&E, formed more than a century ago, has been blamed for dozens of major California fires that have started when trees have fallen on power lines, sending sparks onto dry grass or other trees. In response last May to a report by California Department of Forestry and Fire Protection regarding October 2017 blazes, PG&E said it prunes or removes about 1.4 million trees a year in an effort to prevent such fires.

The company also blamed changing weather for exacerbating the task of preventing fires. "Years of drought, extreme heat and 129 million dead trees have created a 'new normal' for our state," the company said.

Information for this article was contributed by Scott Wilson of The Washington Post.