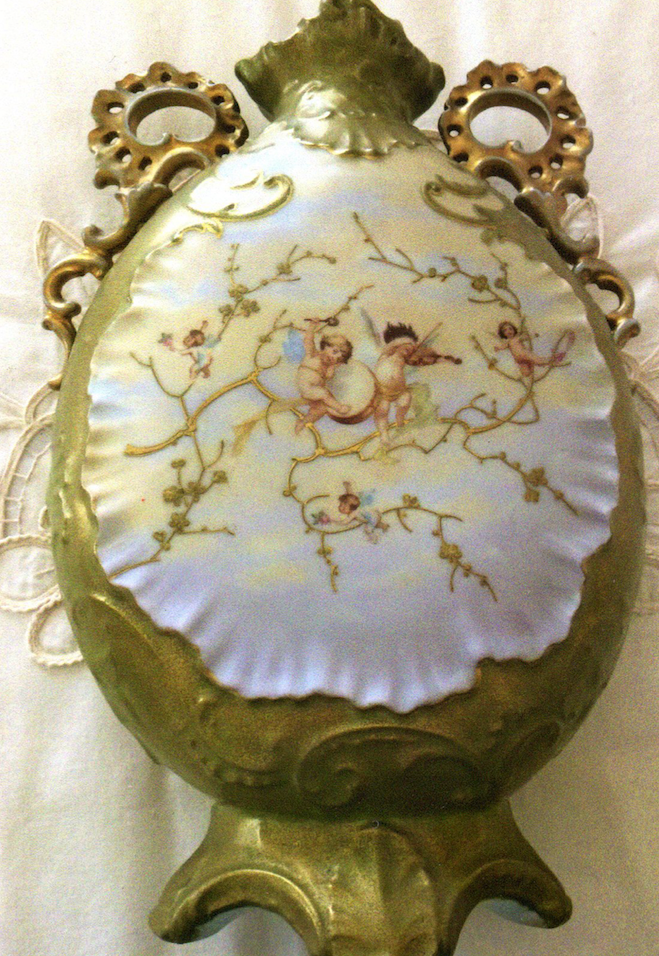 DEAR HELAINE AND JOE: My wife inherited this vase from a friend in 1980. Imprinted on the bottom is a beautiful logo that says "Victoria-Carlsbad-Austria." We are hoping you can tell us something about the origins of this piece.

DEAR I. AND C. R.: This is a beautiful piece of late Victorian porcelain that unfortunately is completely out of fashion with current collectors.

We hate the circumstance because it's a piece that should wow the viewer. But instead, it is often seen as being too fussy, too grandmotherly and out of step with 21st century style. What a shame!

The piece is marked "Carlsbad, Austria," but that is a bit misleading. Carlsbad (sometimes spelled "Karlsbad") was a town located in Bohemia, which was part of the Austro-Hungarian Empire at the time the piece was made. After the end of World War I, Carlsbad became Karlovy Vary, Czechoslovakia (later Czech Republic).

Carlsbad was the well-known center for Bohemian porcelain. Sometimes factories outside the city proper would use the place-name in its mark just for the association in the marketplace. The two-handled vase in today's question was actually made in Altrohlau, Bohemia (modern-day Stara Role, Czech Republic).

Stara Role is located just 71 miles west of Prague, which is very close to Carlsbad/Karlovy Vary. The mark on the piece is in a blue oval that is extremely well-known to collectors because the company was prolific, making everything from fairly expensive pieces to items just for household or hotel usage.

Most (if not all) the wares are transfer-printed, and the company appears to have been trying to produce wares similar to but much cheaper than those produced at the Royal Vienna Factory, which had been in the fine porcelain business since the early 18th century. Collectors probably mark the "Victoria" products from the company down because there is little that is original and most of it was mechanically produced.

Still, this rococo-influenced piece with its white reserve of putti cavorting through trailing flowering vines has some visual pizzazz. The value of the piece depends very much on its size, which we do not know.

If it is 12 inches tall or more, we feel it should have a value in the $85 to $110 range. If the size is smaller, the value could fall by around half.

Helaine Fendelman and Joe Rosson have written a number of books on antiques. Do you have an item you'd like to know more about? Contact them at Joe Rosson, 2504 Seymour Ave., Knoxville, TN 37917, or email them at [email protected] If you'd like your question to be considered for their column, please include a high-resolution photo of the subject, which must be in focus, with your inquiry.