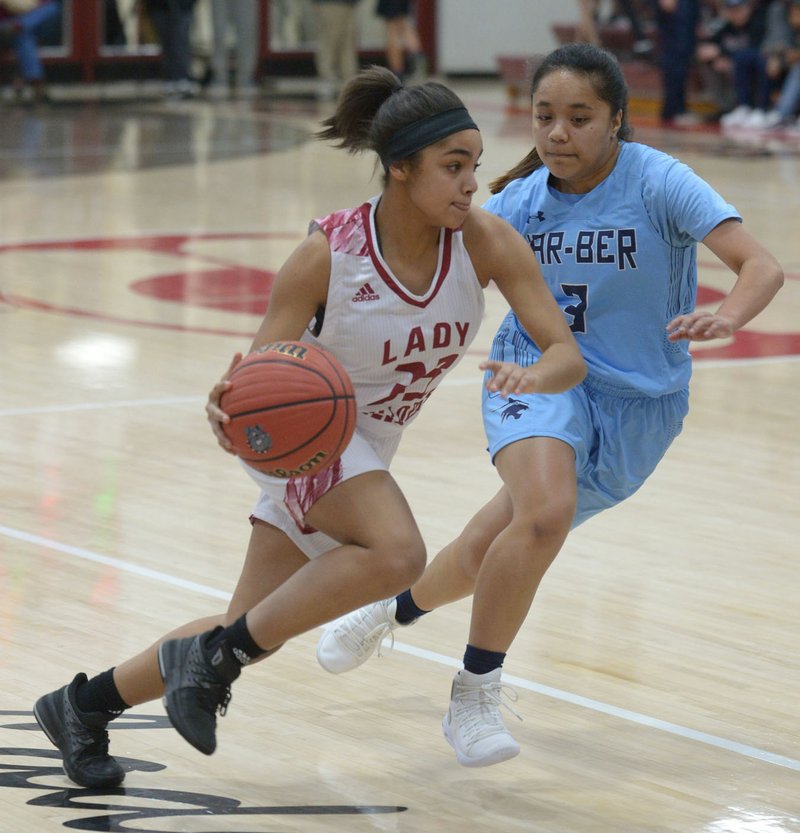 NWA Democrat-Gazette/ANDY SHUPE Springdale's QuaNeishia Bohanon (left) drives to the lane as she is guarded by Springdale Har-Ber's Flo Karu (3) Friday, Jan. 11, 2019, during the first half of play in Bulldog Gymnasium in Springdale. Visit nwadg.com/photos to see more photographs from the games.

SPRINGDALE -- The present and the future of 6A-West girls basketball was on display Friday night. Round one went to the present.

Davis, the Arkansas signee, get her team off to a quick start and a double-digit lead in the second half before she had to sit for a long stretch of the fourth quarter after picking up her fourth foul with 7 minutes, 50 seconds left in the game.

"They are a nice team and we knew they were going to make a run," Springdale coach Heather Hunsucker said. "This is a game of runs. The big thing for us is we had to get Thally (Sysavanh) and Marquesha back on the floor. They both had four fouls, so when we were able to get them back in, we felt pretty good about our chances."

Sysavanh hit four free throws down the stretch to help the Bulldogs hang on.

Springdale jumped to a 7-0 lead in the first quarter with Davis scoring six, and led 24-22 at halftime. The 6-foot Davis took the game over for a stretch of the third quarter, igniting a 10-0 run by scoring six straight points on slashing drives to the rim.

Davis' third bucket in the stretch was a milestone as she eclipsed the school career scoring record with her 1,565th point, breaking the mark held by Krista Sanchez, who played collegiately at Oklahoma.

"It feels good to break the record against Har-Ber because this is a rivalry game," Davis said. "And there were a lot of people here to see this, so it means a lot."

Springdale led 40-30 when Davis picked up her fourth foul. With her on the bench, Har-Ber (8-8, 1-2) took advantage. Koons scored off an offensive rebound and Chloe Joyner hit a big 3-pointer to make it a one-possession game at 40-37 with 2:56 left.

Davis and Sysavanh returned at that point and the Bulldogs held on.

"I thought both of them did what we count on them to do," Rogers coach Preston Early said. "I just love their confidence, and I thought our whole team had a great mindset.

"Winning, period, is hard, and winning on the road is even tougher. Our girls had a good mindset and good attentiveness to detail. If you're going to be a good offensive team, you can't be tentative and hesitate.

Shania Wilson had 16 to lead West, which went more than 8 minutes without a point in the second half and scored only five points over the final 11 minutes.

The victory sets up a 6A-West Conference showdown on Tuesday at Bentonville, which defeated Rogers Heritage on Friday. Both teams are 3-0 in league play.

The pace slowed for Fayetteville (10-2, 3-0) after grabbing a 19-6 lead early in the second quarter. But the Lady Bulldogs were never seriously threatened by Van Buren, which made one basket in the first quarter and trailed 21-10 at halftime.

"We didn't shoot the ball well," Fayetteville coach Vic Rimmer said. "We defended well, rebounded well, and our pressure forced some turnovers. But we didn't put the ball in the basket and that made everybody feel uncomfortable."

The Lady Tigers enjoyed a significant size advantage with 6-foot-4 Maryam Dauda patrolling the paint, but they were also hot from the perimeter Friday night.

That was more than enough roll up a 31-point second-half lead and cruise to the easy 6A-West Conference road win.

"The last couple games we didn't shoot the best, but I kinda felt like we were really efficient with it," Halbmaier said. "I thought Riley Hayes coming in there and hitting three right there in the second quarter was huge. It kind of extended the lead a little bit.

"I thought tonight we had a lot of balanced scoring. We shared the ball. We got quite a few assists and when you have a lot of assists, your offense has a tendency to play well for you."