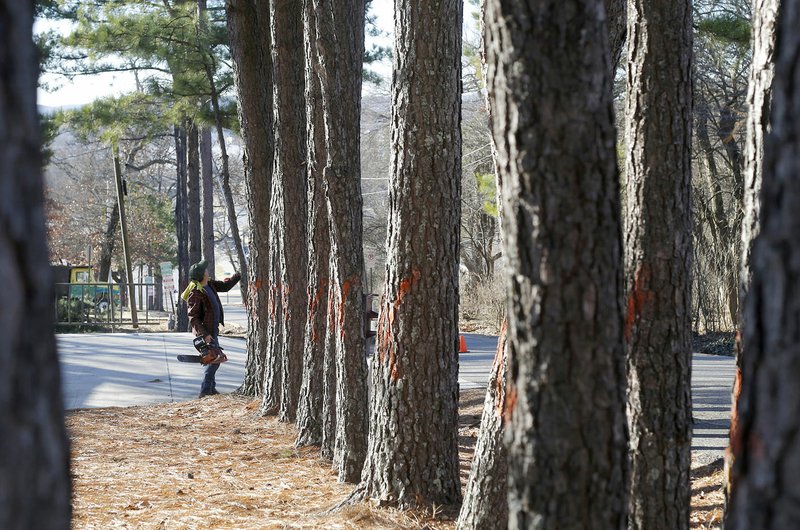 NWA Democrat-Gazette/DAVID GOTTSCHALK Workers prepare to remove trees Wednesday from the area near the corner of Markham Road and Thomas Avenue in Fayetteville.

FAYETTEVILLE -- A group of trees being cut down on university property caught the attention of a nearby neighborhood but will be replaced, university and city officials say.

Trees along Thomas Avenue near Markham Road, southwest of Reynolds Razorback Stadium, were removed Wednesday and Thursday to make room for a road project. The university will widen the east side of Thomas Avenue, with new power poles put in on the west side. The city will put in a water line and a sidewalk on the west side.

"Thomas Avenue is very dangerous and narrow, with ditches on both sides of the street," said Mike Johnson, associate vice chancellor of facilities for the University of Arkansas.

An equal amount of caliper trees will replace about 25 pine trees on the east side of Thomas Avenue, Johnson said. The project is one of a few in that part of campus to make travel safer and easier, he said.

The university owns the property, but some of the trees were within the city's right of way along the street. The university needed permission from the city to remove those trees, City Engineer Chris Brown said. The city got notice Wednesday morning the trees were coming down, he said. Crews were asked to halt.

Brown said city officials were aware of the project, just not that the trees were being removed that morning.

Trey Marley, who lives just north of Markham Road, said it wasn't the trees getting cut down so much as the lack of notification that irked him.

"The fact that nobody notified anybody in the neighborhood -- and the fact that in less than 24 hours those trees had X's on them and they were down -- that's sneaky," he said. "That's kind of how they roll."

The university doesn't have the same notification requirements at the city. However, collaboration is a key aspect of any university project, Johnson said.

"Frankly, we were unaware that there was supposed to have been a permit application. But, the city has been working with us, along with SWEPCO, this whole time," he said. "We weren't trying to pull any wool over anybody's eyes."

A few more trees are left to go, and the city has since signed off on their removal, Urban Forester John Scott said. The city Engineering Department has to approve before the permit is issued and the removal continues, which should be soon, he said.

Scott said it was resident concern that brought the issue to the city's attention.

"I love that about our city," he said. "When a tree falls, I hear about it from our citizens." 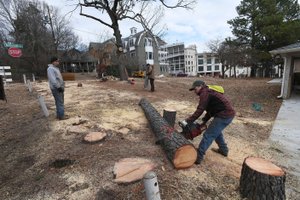 NWA Democrat-Gazette/J.T. WAMPLER A crew from Valdez Tree Service removes a pine tree Thursday on Thomas Avenue near Markham Road just west of Reynolds Razorback Stadium in Fayetteville. The tree was the last of a row of trees on the block removed this week.