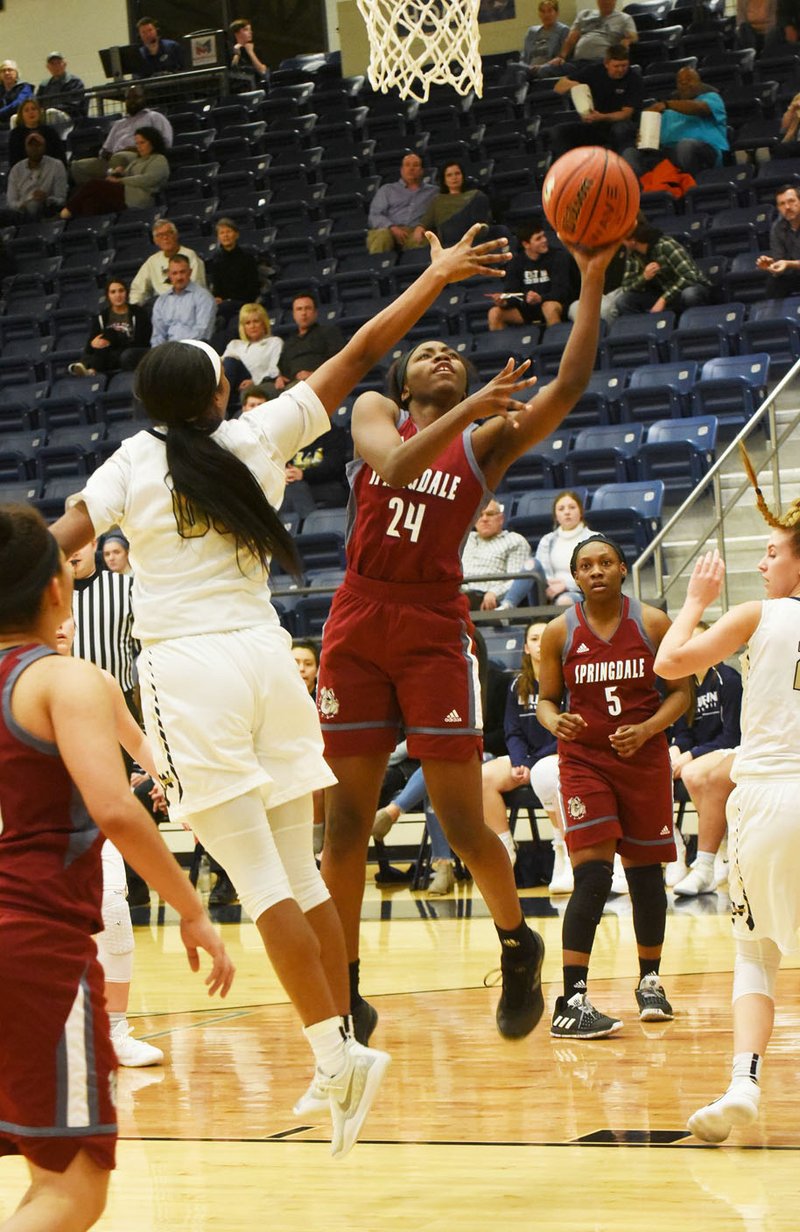 CENTERTON -- It's a trend Heather Hunsucker has become very familiar with this season: Marquesha Davis shoulders the early load, then her Springdale High teammates do the rest.

The Arkansas signee went the final 10 minutes without a point, but the rest of the Lady Bulldogs took up the slack and pulled out a 43-42 victory over Bentonville West during 6A-West Conference girls basketball action in Wolverine Arena.

"We've had several games on the road where that's been the case," said Hunsucker, who earned her 100th career victory at Springdale. "Marquesha kept us going early, then she knows how to get her team involved.

"We're more than one person. We have a really nice team."

Pegue's bucket was part of a 15-2 run in the third quarter as Springdale turned a 10-point halftime deficit into a 30-27 lead. Davis had 12 of the Lady Bulldogs' first-half points and her final bucket pulled Springdale within 27-26 with 2:37 remaining.

Ashlyn Minchew made it a three-point game in the final seconds with her bucket, and the Lady Bulldogs led by as much as 37-32 on Thaly Sysavanh's free throw with 5:21 remaining. Anna Kash and Kelsey Wood hit buckets to pull West within one, but Alexa Bersi's two layups gave Springdale a 41-36 lead with 2:48 left.

"We made some adjustments at halftime with some of the screens they were doing and put a little more pressure on the guards," Hunsucker said. "That gave us some relief on the post. Their 00 (Shania Wilson) gives us fits, so we have to do some different things."

Kelsie Mahone's 3-pointer pulled West within 43-42 with 31 seconds left, then the Lady Wolverines had a chance to win after the Lady Bulldogs missed on two front ends of a 1-and-1 opportunity. Kash drove into the lane after grabbing a pass deflection, but her shot wouldn't fall as the buzzer sounded.

Davis finished with 18 points and was the only Springdale player in double figures. Kash had 15 for West while Wilson added 11.

Caylan Koons poured in a season-high 33 points to lead the Lady Wildcats to a second-half comeback over Rogers Heritage (4-10, 0-2) on Tuesday night.

The freshman scored 20 in the second half, including knocking down the go-ahead three with just over four minutes left in the game. Heritage contested the shot, but Koons had the hot hand the whole night.

"Every time I shoot, I remember everything my coach tells me," Koons said. "I know I'm going to make it every time. That's my mindset."

Sophomore Kania Starks added 12 and Chloe Joyner hit a huge three in the fourth quarter that gave Har-Ber (8-7, 1-1 ) its first lead of the night before Heritage tied the game up a few minutes later. The win gives the Lady Wildcats its first 6A-West conference win of the season.

Heritage shot the ball well behind the arc with junior Maddie Lynge leading the team with 12 points behind four three-pointers. Senior Sydney Kinnamon finished with scored nine points while knocking down two threes in the game.

Bentonville High 6-4 sophomore Maryam Dauda got the offense going early and often, and the Lady Tigers didn't look back after that Tuesday night at Clair Bates Arena.

Dauda finished with a game-high 17 points, while teammate Avery Hughes added 16 for the Lady Tigers (13-2, 2-0 6A-West) in the road victory.

"I was really happy with the effort coming down here," Bentonville coach Tom Halbmaier said. "This place is a tough place to play. They just do a great job taking you out of your rotation and that nature. We were able to get ahead a little bit."

Bentonville held a 14-9 edge after the initial quarter of play but pushed it out to a 28-14 lead at halftime by closing out the second quarter with an 11-3 run.

"We hit some timely shots," Halbmaier said. "Van Buren does a good job getting the ball to their shooters. This is a good victory on the road for us."

Fayetteville turned up the defensive pressure and picked up the pace to wipe out a four-point halftime deficit and race past the Lady Mounties in 6A-West Conference play Tuesday night.

Sasha Goforth poured in 20 of her 24 points in the second half. Fayetteville (9-2, 2-0) opened the second half with an 8-2 spurt, including seven by Goforth and never trailed again.

The Lady Purple'Dogs put the game away with a 10-0 run to begin the fourth quarter and didn't allow a fourth-quarter field goal for more than seven minutes.

Fayetteville coach Vic Rimmer liked his team's defense in the second half, but that wasn't all.