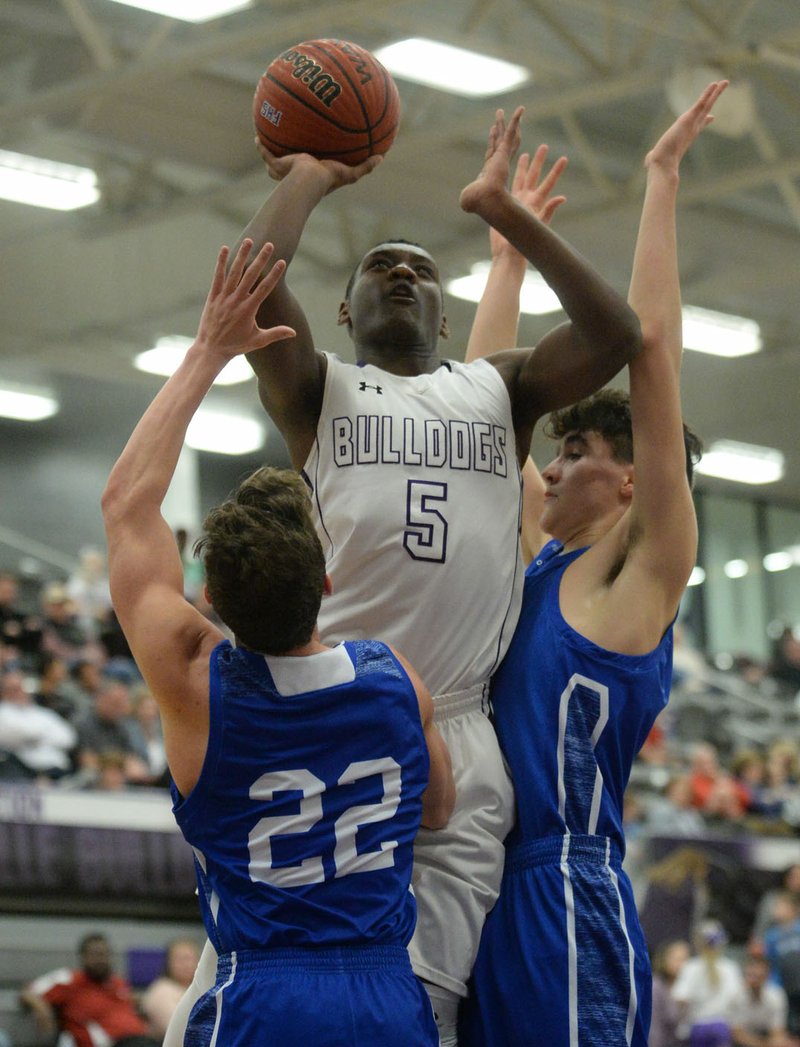 NWA Democrat-Gazette/ANDY SHUPE Fayetteville's Darius Bowers (5) takes a shot over Rogers' Derek Hobbs (22) and Van Rhame (right) Tuesday, Feb. 5, 2019, during the first half of play in Bulldog Arena in Fayetteville. Visit nwadg.com/photos to see more photographs from the games.

FAYETTEVILLE -- Fayetteville went inside after starting outside against Rogers on Tuesday.

Center Tamaury Releford scored 11 of his 12 points in the second half to lead Fayetteville past Rogers 61-58 in 6A-West Conference action at Bulldog Arena.

Rogers got to within 59-58 after a quick 3-pointer by Derek Hobbs with 8.7 seconds left in the game. Collin Cooper answered with two free throws but Rogers still had a chance to tie after getting the ball back with four seconds left.

But Rogers did not get off a shot. The Mounties threw the ball out of bounds and Fayetteville (18-3, 9-0) survived the scare on its home court.

"When Tamaury's not on the floor, it hurts," Rogers coach Kyle Adams said. "He's a mismatch because of his size. We didn't do a good job of executing in the half court but, hey, give (Rogers) credit. They're a good team."

"Too, quick, too quick," Adams yelled from the bench while encouraging his team to attack the basket.

Fayetteville got the message and began looking more frequently at Releford, a 6-foot-7 sophomore.

Rogers did not make a field goal until Elliot Pascal hit a 3-pointer with 5 minutes, 24 seconds left before halftime. That started a surge for the Mounties, who outscored Fayetteville 17-8 in the second quarter to get to within 27-21 at halftime.

Pascal had nine points by halftime and he blocked a shot at the buzzer to give Rogers the momentum heading into the locker room.

Rogers continued to score with aggressive moves to the basket. But the Mounties fell just short when its last possession ended with the ball going out of bounds.

"Lamont (Frazier) has done a good job with those guys," Adams said. "They were the most aggressive team after the first quarter."

The Wildcats used one final surge to pull away for a big 6A-West Conference road win on Tuesday night.

Heritage (8-13, 3-6) tied the game at 50 with 4:13 left in the fourth quarter thanks to a pair of baskets by Logan Clines, but the War Eagles managed just one field goal the rest of the game.

Cole Bishop's fifth 3-pointer of the game gave Har-Ber the lead for good with 3:46 left.

Lawson Jenkins finished with a team-high 22 points and Nick Buchanan added 15, too, but Har-Ber coach Scott Bowlin said Bishop a key to the victory, scoring 15 points -- all on 3-pointers.

"I thought Cole Bishop was definitely the difference tonight, hit some big shots when we needed them," Bowlin said. "You sorta expect that out of Lawson and Nick on what they do every night. I thought they both played a good floor game.

"We hit our foul shots down the stretch. Again, we executed defensively and didn't let them get second shots. We're playing pretty good right now. We feel like we're getting better and right now is the time to do that."

Logan Clines led all scorers with 25 points for Heritage, but no other War Eagle was in double figures.

Brayden Freeman hit two free throws with 2.4 seconds remaining to help Bentonville hold off Van Buren and clinch a spot in the Class 6A state tournament.

"It was just a struggle," Bentonville coach Dick Rippee said. "It was a hard game to play in, a hard game to coach. Our guys were just a little flat. I thought our approach Friday night with Michael Shanks was a lot better than it was in this game.

"You have to have an edge about you. I didn't think we had that same edge, and our preparation wasn't as good in practice. You see what you get on the floor if you don't prepare the right way. Hopefully, our guys will learn for it."

Freeman had 19 points to lead Bentonville, which played its second game without Shanks as he deals with an injury, while Connor Deffebaugh added 17 and Colton Simmons 14. Phillips had 22 for Van Buren, followed by Brayden Gilmore with 16.

Visiting Bentonville West went toe-to-toe with Springdale all night long, but it was a 22-10 fourth quarter advantage that gave the Wolverines their second 6A West Conference win of the season.

"I thought our defensive effort was great tonight and we rebounded well, particularly being able to hold them to one shot (per possession), and that was the key for us." West coach Greg White said. "Springdale is so athletic and so well-coached, and we knew it was going to be tough, especially on their home court."

"But our kids did a great job, and I'm really proud of them."

West scored the first six points of the third quarter, before Springdale's Chops Sanders got a steal and a layup to cut the lead to 23-15.

A layup and a pair of free throws from Dawson Bailey put the Wolverines ahead 31-24 late in the third, but the Bulldogs struck back with a three from JP Hignite and a layup from Sanders to cut it back to four heading into the final quarter.

West senior Tucker Swoboda scored nine of his 11 points in the fourth, including a floater in the lane and a layup to help boost the margin to 48-31 with four minutes left.

Vincent Mason paced the Bulldogs with a team-high 12. 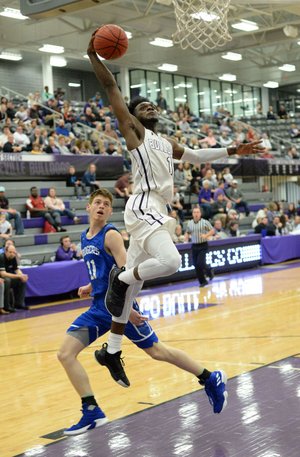 NWA Democrat-Gazette/ANDY SHUPE Fayetteville's Austin Garrett (top) reaches to dunk the ball ahead of Rogers' Elliot Paschal Tuesday, Feb. 5, 2019, during the first half of play in Bulldog Arena in Fayetteville. Visit nwadg.com/photos to see more photographs from the games.