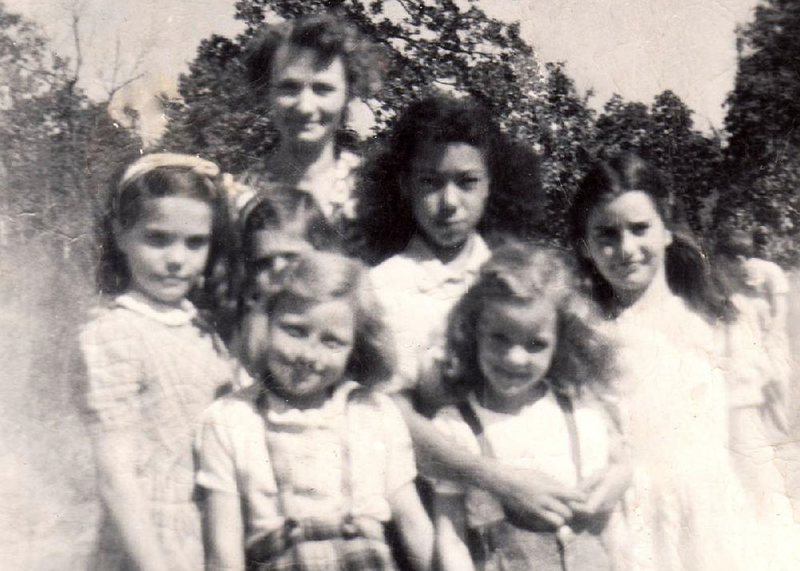 Laverne Cook stands in front of Lower Whorton Creek School teacher Blenda Mathis with her arms around Barbara Fowler, now Barbara Robertson, in a school photo taken in the fall of 1948.

HUNTSVILLE -- A tiny, all-white public school in rural Madison County quietly enrolled a black girl in the mid-1940s, several years before it was legal to do so.

By 1946, there was only one school-age black pupil left in Madison County, said Kevin Hatfield, a former Huntsville mayor.

It made no sense to hire a teacher for one pupil, so school administrators sent Laverne Cook to the all-white Lower Whorton Creek School, where the boys had a small shoving match over who would get to sit next to her, according to Hatfield's doctoral dissertation on the history of Madison County schools.

"She was beautiful," said Betty Neal of Dallas, Cook's daughter. "My mom was gorgeous. ... She was popular."

Laverne Beatrice Cook Toran, 72, died in 2011. On her deathbed in a San Francisco hospital, Cook told her daughter about an envelope under her bed at home.

"She said, 'I want you to get it and put it in your suitcase and don't open it until you get home,'" Neal said.

So, after her mother died, Neal returned to Dallas and opened the envelope. It was full of photographs of her white ancestors in Madison County.

Neal knew that her maternal grandfather was white, but that's about all she knew about that side of her family until she found those pictures.

"I only knew my grandfather was white because of my mother's complexion and her hair," Neal said. "It was obvious she was not 100 percent black."

Neal conferred with an aunt in Fayetteville, who identified relatives in the photos.

"When I saw those pictures, I thought, 'Oh my God! These are all white people! Really, really white!'" said Neal, who was raised by her father's parents in Fayetteville. "I knew I was a little bit country, but I must admit, I was thrown."

Cook's mother was black and her father was white, Neal said. She said Cook could have passed for white, but everyone in Madison County knew her mother was black. It was a secret they kept from state education officials.

That secret integration in a small, mountain community was years before the Supreme Court's 1954 decision in Brown v. Board of Education of Topeka, Kan., which found segregated schools unconstitutional.

Arkansas schools had been officially segregated since the state Legislature passed Act 52 in 1868.

After the 1954 Supreme Court decision, Charleston was the first school district in Arkansas to desegregate, followed by Fayetteville, whose School Board was actually the first to approve desegregation, according to The Encyclopedia of Arkansas History & Culture.

Two University of Arkansas schools integrated in 1948 -- the law school in Fayetteville and the medical school in Little Rock. But integration for Arkansas grade schools and high schools legally didn't come about until after the Brown v. Board of Education decision.

Arkansas historians said they were unaware of a black pupil attending an all-white Arkansas public school before it was legal to do so, but it wasn't out of the realm of possibility.

"I have not heard of such, but that doesn't mean it didn't happen," said Guy Lancaster, editor of The Encyclopedia of Arkansas History & Culture.

"I do not know of any cases in Arkansas where the school district allowed one (or a few) black students to attend, even though it broke the law before Brown," said John A. Kirk, a professor of history at the University of Arkansas at Little Rock and director of the Anderson Institute on Race and Ethnicity.

Cook would have been about 7 years old and living with her grandparents in Madison County when the school for black students at Shady Grove closed, according to Hatfield's dissertation at the University of Arkansas, Fayetteville.

"The state required schooling for the child but state law forbade the integration of races in the schools," he wrote, referring to Jim Crow laws.

"Both men agreed that it was unfair to deny the child her education even though there was little likelihood of prosecution if the young girl was kept at home," according to Hatfield's dissertation.

So they agreed to have Cook attend school with the white children.

"It was agreed that some story would be told to state authorities if they ever asked why the law was being ignored concerning segregation," according to Hatfield's dissertation.

Hatfield said he interviewed Easterling around 1990.

"He still didn't want to talk about it because he was afraid he'd go to prison," Hatfield said.

While Cook's integration of the Whorton Creek school was largely unknown outside Madison County, it was documented decades later by publications within the county.

One of those articles appeared in the Madison County Record in 1985. It was written by Gordon D. Morgan, a sociology professor at the University of Arkansas, Fayetteville, and his wife, Izola Preston.

"The attendance of Laverne Cook, a black child, in a white school in Madison County, in northern Arkansas, in the mid-1940s, antedates the Brown decision outlawing segregated schools by nearly a decade," they wrote.

Joy Russell, a Madison County historian, also wrote about Cook's integration of the Whorton Creek school in 2011 for the Record and in 2013 for Madison County Musings, a publication of the county's genealogical and historical society.

"The black family was greatly respected by the local community and no record of objection to the girl attending school with the white children can be found," Russell wrote for Musings. "She took part in all school activities and no issue was made of her race."

Russell said she hasn't been able to find any school documents from the time that Cook attended school at Lower Whorton Creek.

But there is a photograph.

It shows Cook on the Whorton Creek school playground in the fall of 1948. She's standing with the teacher, Blenda Mathis, and five white girls. Cook has her arms around a smaller girl in front of her, Barbara Fowler, now Barbara Robertson, 77, of Huntsville.

Robertson said her family moved back to Madison County from Wyoming in 1948, and Cook was already attending the Whorton Creek school at that time.

"We didn't know any racism then," she said. "We were never taught to look down on anybody. Probably, if we had, we would have gotten the seat of our pants warmed."

"I went to school with her," he said. "There was no problem with that. She was just another one of the kids. Yeah, she studied. She used to walk to school with one of the other neighbors. She would wait and come down with him to school."

The number of black school-age children in Madison County dropped from 15 in 1900 to five in 1935, wrote Russell.

"It was against the law for her to go to school here, but that's back when parents had a little say over their schools," Vanderpool said. "She didn't have no place to go to school. They had a public meeting. One of the School Board members said our job is to educate the children, give them the best education we can."

So the public was on board, and Cook was allowed to attend the nearest white school, at Lower Whorton Creek, a one-room schoolhouse where students in grades one through eight were taught by the same teacher.

Neal said her mother attended the Whorton Creek School from 1946 to 1948 or 1949. Then Cook moved to Fayetteville, where she was one of the first five students to integrate Fayetteville High School in 1954.

Neal said her mother was 16 years old when she married James Henry Neal, an Army man from Fort Smith. She dropped out of high school, and they moved to California. They soon divorced, but Cook stayed in California and remarried.

Neal said she is proud of her white ancestors in Madison County. One story about her great-grandfather is that he borrowed money from a bank and would walk several miles in the rain to make payments on the loan.

"I never saw racism in Northwest Arkansas, not to the extent that somebody would call it racism," Neal said.

Though she moved to Texas in 1979, Neal stays in contact with many people she grew up with. She also visits Fayetteville often. It keeps her grounded.

"I still have friends from third grade on -- my white friends -- that I still communicate with weekly on Facebook," she said.

Neal is an assistant store manager at a Walmart Supercenter in Dallas. She's in "asset protection" there, which means among other things, she's on the lookout for shoplifters. She also does civic work and helps the homeless in Dallas.

But it hasn't always been that way. For 37 years, Neal ran nightclubs in Dallas.

"I've been shot. I've been stabbed," she said. "The beer bottle to the forehead required 58 stitches."

Life is a little quieter now. Neal lost her mother to lung cancer, but she's happy to know more about her ancestors in the Ozarks.

"I figured at some time my mom and I would sit down and talk about it," she said. "I didn't know she would get sick and pass away. ... What took place in Madison County is such a phenomenal story, and no one really knows it." 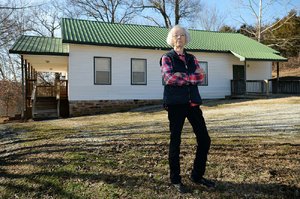 Photo by Andy Shupe
Barbara Robertson of Huntsville stands outside the Lower Whorton Church near Huntsville, the site where she attended school with black student Laverne Cook in the late 1940s. “We were close, I guess,” Robertson said. “We went to school every day, played together every day. We would eat out of her lunch bucket just like she would eat out of ours. We all brought food. Like a picnic. It was fun.”