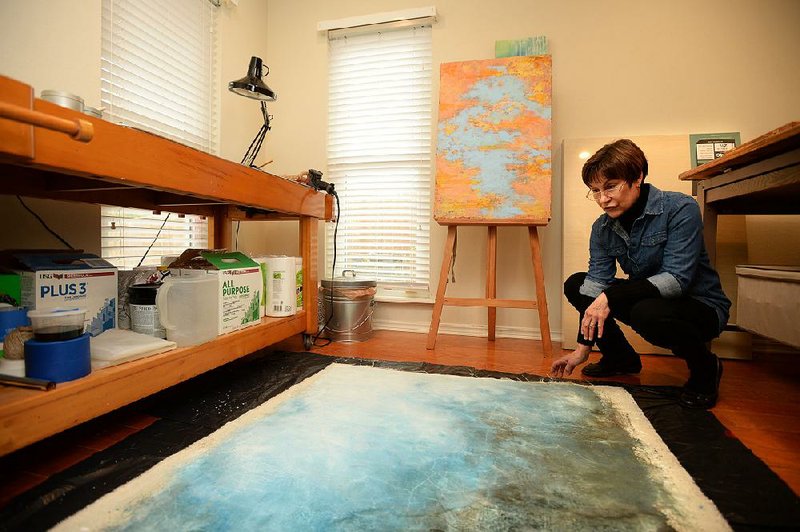 Denise Sagan stood over a 3-foot-by-4-foot piece of artwork lying on the floor between two tables inside her living room Thursday in Fayetteville.

She was waiting for her blue watercolors to dry on a section of burlap so she could glue it to a wood canvas before covering it in caustic, which is beeswax.

"I'm hoping to at some point get a studio," Sagan said. "It would be nice if it was affordable and close by."

Sagan wants to see what will happen now that Artspace is working to create space for artists.

Artspace, a Minneapolis nonprofit art research and project development organization, released a 210-page report last week that recommends developing more than 100 places for artists to live and work in the downtown areas of Northwest Arkansas' four largest cities. Artspace owns and operates its developments, according to its website.

Many cities across the nation have buildings in which artists, novelists and poets can rent loft-type apartments that provide space for them to work, as well as for their families to live.

In the case of Westbeth, a nonprofit organization purchased the former site of Bell Laboratories and from 1967-70 converted the empty complex into 384 studio, one-, two- and three-bedroom loft apartments with work spaces for painters, sculptors, poets, novelists and other artists. In addition to loft apartments, the complex includes performance and rehearsal spaces, as well as several communal studios.

The Westbeth conversion influenced other projects to convert industrial buildings into artist housing, such as the Chickering Piano Factory in Boston's South End into the Piano Craft Guild Housing for Artists in 1974, although by 2018, it changed focus and became a destination for high-income families who wanted to live in urban industrial lofts.

In Arkansas, one of the more well-known artist-home projects was the restoration of the former Kramer School in Little Rock. The school, built in 1895 at Seventh and Sherman, near the Arkansas Arts Center, gained national attention in 1969 as the original site of the Center for Early Development and Education, according to a history of the Little Rock School District.

Bettye Caldwell, an education professor at the University of Arkansas at Little Rock, led the effort to establish the center. The center eventually moved, and the Kramer building closed in 1978. The building deteriorated as it sat vacant.

The city Board of Directors, Little Rock School District, historic preservationists and civic leaders spent several years trying to save the building and find a purpose for it. In 1997, officials dedicated it as lofts for artists and exhibit space after a $3.5 million renovation.

For the project in Northwest Arkansas, each city is expected to have a development tailored to its needs. A $400,000 grant from the Walton Family Foundation paid for a yearlong study on artist needs in Bentonville, Fayetteville, Rogers and Springdale.

Graham Cobb, CEO at the Greater Bentonville Area Chamber of Commerce, said it is important to give artists a reason to stay in the area.

"They provide a local palette and soundtrack and flavor, but then they also really accent the culture, and they elevate the experience that we all have whether or not we're artists," he said. "They add to the quality of life that allows us to attract high-performing people to help us move this place forward."

One hurdle artists face is a housing market with prices on the rise, said Wendy Holmes, senior vice president for Artspace.

Now that the report has been released, the organization's next steps will be to meet with city officials to determine where exactly the projects will be and to secure funding, Holmes said. The report lists several possible private and public entities that could contribute money.

The report's recommendation for Bentonville is for 50 affordable live/work artist housing units; 10 artist-in-residency spaces programmed by the Momentary; and an innovation space. The proposed site is next to the Momentary, an art and performance venue developed by Crystal Bridges Museum of American Art and expected to be complete in 2020.

"We are excited to explore new opportunities for our creative community, particularly with artist-in-residency spaces. We are just starting conversations and hope to share more about the project in the coming months," Rod Bigelow, executive director and chief diversity and inclusion officer for Crystal Bridges, said in an email.

A classic mixed-used development with 35 live/work housing units and 15-20 private working studios is recommended for land next to the Fayetteville Public Library, according to the report.

The Walton Family Charitable Support Foundation in 2017 gave $120 million to establish a School of Art at the University of Arkansas. The Windgate Charitable Foundation gave $40 million to develop an art and design district planned in multiple buildings in south Fayetteville, a few blocks from the university.

Holmes said the goal is to give artists places to live and work on their art after they graduate from the university.

Danny Baskin graduated in 2017 with a Master of Fine Arts degree from the university. His work is multidisciplinary and includes a mix of sculptures and installations.

The spaces proposed for Fayetteville would allow artists to work where they live instead of trying to find studio space outside their homes on top of buying materials, he said.

Artspace's definition of who is an artist is "very broad," according to its report. Art can include drawing, painting, film, acting, pottery, culinary or tattooing, among many others.

Bryan Hembree said he is excited to hear that musicians are a part of the plan. He and his wife, Bernice, are co-founders of the Fayetteville Roots Festival, a summer music and food festival, and served on an Artspace study committee.

"From the very beginning, they were keen to make sure to reach out to the music community," he said.

Like other artists, musicians typically have to work other jobs to support themselves. About 10 percent of artists surveyed by Artspace over the past 15 years make all of their income through their art, according to the report.

Housing for musicians comes with unique challenges because rehearsals can be disruptive to neighbors, he said.

A Marshallese cultural center would anchor a Springdale live/work housing development with possible studio spaces, according to the report. The proposed site is next to the Arts Center of the Ozarks.

Melisa Laelan, president and founder of Springdale's Arkansas Coalition of Marshallese, said she wants the center to be a safe place for Marshallese-Americans to express themselves and for people to learn about Marshallese language, history and culture, including art forms such as handicrafts and attire. More than 12,000 Marshallese live in Northwest Arkansas.

As for Rogers, Artspace plans to focus more on commercial space, according to the report. The downtown site is to be determined. Work space, galleries and a music venue are among the report's commercial recommendations.

"This aligns directly with our mission," Bland said of Artspace.

She said it is another thing that will attract visitors.