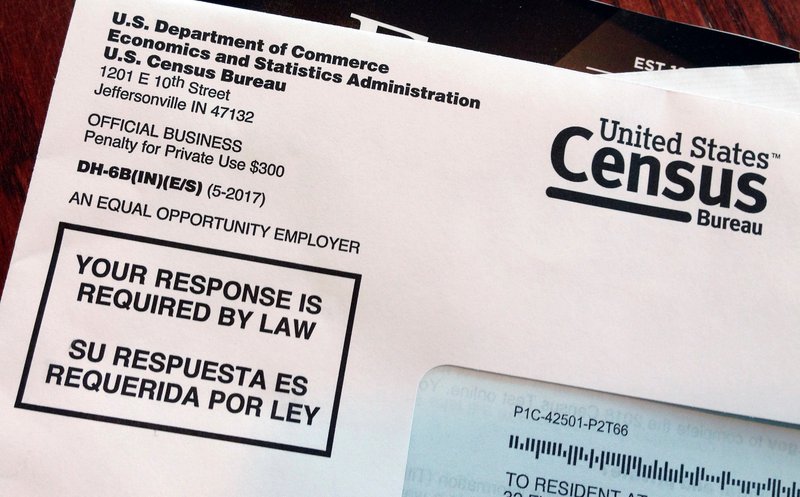 FILE - This March 23, 2018, file photo shows an envelope containing a 2018 census letter mailed to a U.S. resident as part of the nation's only test run of the 2020 Census. Legal wrangling has surrounded the U.S. census count for decades, culminating in this year&#x2019;s fight over adding a citizenship question. (AP Photo/Michelle R. Smith, File)

Tyson Foods' efforts to encourage its workers to answer census questionnaires were praised at a panel discussion Nov. 19 on getting a complete census count. The Washington County chapter of the League of Women Voters sponsored the discussion.

"The census helps define the nation -- in particular cities and regions -- in terms of population and demographic makeup," said Nelson Peacock, president and CEO of the Northwest Arkansas Council. "This information is important to businesses for marketing and growth opportunities and data-driven decisions. In addition, census data establishes the baseline for the distribution of federal funding and legislative districts."

Arkansas receives nearly $10 billion annually in federal funding under various programs, according to a recent report from the George Washington Institute of Public Policy. The Arkansas State Data Center estimates a 1% under-count in Northwest Arkansas could result in $170 million in lost funds over 10 years for Benton and Washington counties.

"With 141,000 team members around the world and 25,000 in the state of Arkansas, we aspire to be leaders in the business community and the communities where we work and live," Tyson said in the statement. "That responsibility includes advocating for census participation and helping everyone understand the importance of being counted."

Tyson and Wilkins asked businesses to make a commitment to support the census to ensure an accurate count. Among actions recommended are creating printed materials and communications, setting up information booths, designating one or more individuals within a company to take ownership of the census initiative and creating safe spaces within company offices for employees to ask questions or complete the census.

"The challenges to a complete count are very real, for every demographic group, including immigrants," Reith said in an email. "We are proud that Arkansas immigrants have contributed to our economic growth in this region, and a shared commitment around immigrants participation in the census will help insure that our region's tax revenue stays here and collectively we can all lean into our economic development potential."

Mailed census forms will go out with the goal that most households will fill them out by April 1, according to the Census Bureau's schedule. After that, census-takers will knock on doors. The finished figures are due for presentation to the president by the end of the year. States will receive detailed information by March 2021.