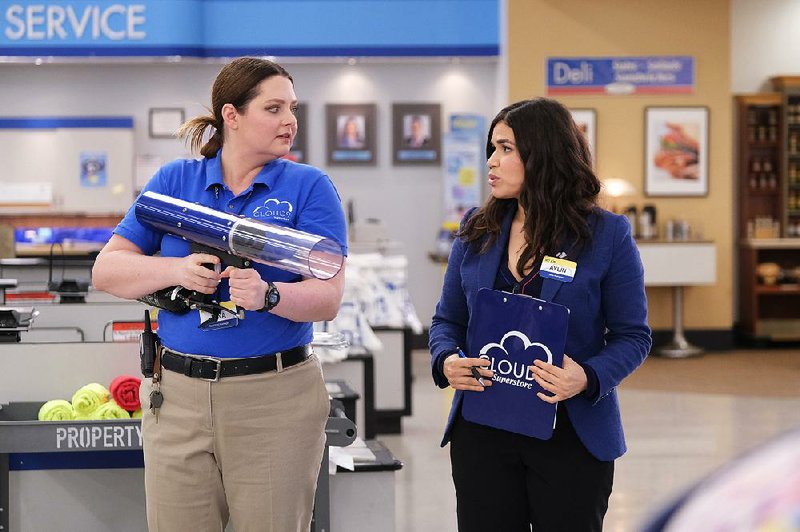 Lauren Ash (left) stars as Dina and America Ferrera plays Amy on NBC’s Superstore. Ash has added podcaster to her resume with Giving It Up For Less, which takes advantage of her impulse to overshare. (NBC/Tyler Gordon)

Best known for her role on the NBC comedy Superstore, Lauren Ash has added podcaster to her resume with Giving It Up For Less, which takes advantage of her impulse to overshare. While some celebrities have tightly controlled social media accounts that try to create the illusion that they're an open book, with Ash that's the real deal.

Launched in October with new episodes posting every Tuesday, the podcast is enormously entertaining. Both fizzy and self-deprecating, it's a fascinating window into the life of actors.

The oversharing premise "came out of the fact that in the talk show world I've kind of become known for being pretty candid -- sometimes maybe too candid -- about my real life," Ash said by phone. "That stuff has brought me as many followers on social media as doing Superstore has, so it felt like obviously people are interested in the ridiculousness that is me as a personality as well as being an actor.

"Like, I really will tell somebody I just met anything about me, so it felt like that was a cool jumping-off point.

"And the other thing is that I am somebody who attracts extremes -- I attract the uber-amazing, successful and hilarious, and I also attract the uber-creepy, toxic and delusional. And that's allowed me to have amazing stories and disastrously amazingly stories, and I just don't run out. I was like, how many episodes can I do? And what I'm learning is a lot. I just have an endless well of ridiculous things that have happened to me."

A veteran of the Second City in Toronto and Chicago, Ash isn't particularly guarded or conscious of maintaining an image, which is part of the podcast's appeal. Ash relishes the pratfalls of life -- her own and that of her guests; the cringier the better, which is what makes the show so relatable -- and her tangy enthusiasm is contagious.

Each episode is centered on a loose theme. "It's like an improv suggestion."

On an episode featuring guest Marque Richardson (of the Netflix series Dear White People), the theme is "Stranger Encounters" and Ash talks about rarely being conscious of having any level of celebrity and then suddenly being confronted with it:

"There's always that layer. For example, I'll go on a date with somebody I met on an app and when I get there I realize he's a superfan of my show. And it's something that never entered my mind ... When you have that slow burn of a career and you're not super famous at 20, I feel like it's not second nature to think: Oh, I have to think about things differently now."

She then offers an anecdote that speaks to something I've always been curious about:

"I have to get better about it too because I've had some instances. Postmates, for example. I didn't even answer the door, my friend answered the door, and they said, 'Tell Lauren I love her on Superstore.' And I was like, first of all, if you've never used Postmates, it only lists your first name and has a tiny teeny picture of you. And I'm like, the fact that they were able to figure out that was me, make the connection and now also have my home address ..."

You don't often hear actors open up about this facet of their lives.

"Listen, I was a teenager who was fascinated by what this world is and wanted to potentially be part of it in some way," she said. "So I have always been fascinated by what the lives of actors are like and what does the day-to-day look like. Celebrity is titillating for a million reasons, right? So I think that's a fun part of it. This job that we do is weird. It's a very specific, odd industry to be a part of on many levels. When you're starting out, it's got a series of interesting quirks. And as you become more successful those quirks just change."

The podcast offers such a clear delineation between Ash the person (upbeat, chatty, supportive) and Superstore's Dina, who is the walking embodiment of schadenfreude. They're as different as night and day -- except when Ash starts talking grudges.

She laughed at that.

"That is the dichotomy of me, for real. I am a grudge-holder, I think it's part of my loyal nature. I will go to the ends of the earth for you, but if you wrong me or if you wrong somebody I love, then you're dead to me forever."

Ultimately, she just likes to talk. On the podcast, she said, she'll find herself recounting a story "and then I'm like, oh my God, why? I promised myself I wouldn't talk about this, why am I doing this? But there's something about the nature of connecting with somebody and really enjoying their company that makes you want to share, if that makes any sense.

"So it's been a really fun creative process, and I've been impressed by how open people have been willing to be and just how game they are for what the podcast is."