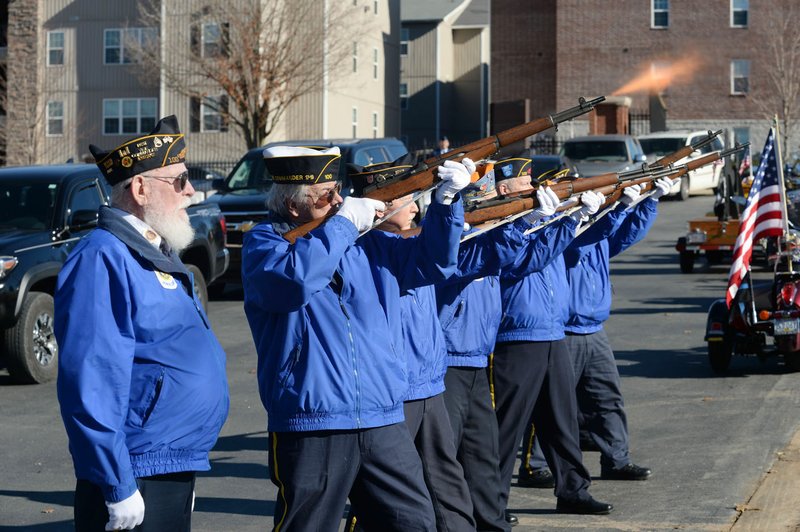 NWA Democrat-Gazette/ANDY SHUPE Members of the Rogers American Legion post Honor Guard give a three-volley rifle salute Wednesday during a funeral service for four U.S. military veterans who were classified as 'unclaimed' at Fayetteville National Cemetery. Officials at the cemetery worked with the Washington County Coroner's Office, Bo's Blessings and other local veterans service organizations to honor and bury the former service members.

"We would have done anything for them if they had asked, but sometimes veterans do not ask," said Devin Immel, a U.S. Marine Corps veteran from Springdale. "Sometimes, they don't want to ask. Others would have asked if they could have."

Washington County Coroner Roger Morris, who helped organize Wednesday's event, confirmed the four died homeless and no family could be found despite a search.

The four honorees, all from Washington County:

No other information on the men's backgrounds is available, according to both the coroner and National Cemetery. The Washington County Coroner's Office and the cemetery helped arrange Wednesday's 1 p.m. service. A crowd was gathering by 12:30 p.m., largely veterans and families of veterans.

Public officials, law enforcement personnel and others attended also. Members of the crowd ranged from school children to white-haired service veterans wearing uniforms, some in wheelchairs or holding canes.

"We're all brothers. We're here to support our brothers," said Robert Staats, a member of Veterans of Foreign Wars post from Siloam Springs, one of at least five such groups providing honor guards at Wednesday's ceremony.

The long-scheduled service came the day after more than 1,000 people held a vigil on Dickson Street in Fayetteville to honor the memory of Stephen Carr, a Fayetteville police officer killed Saturday in the line of duty.

Morris, visibly moved, thanked the crowd Wednesday for attending so soon after the tragedy of Carr's death.

Morris' office attempts to find next of kin for all unclaimed bodies. Service records are among the records routinely checked, Deputy Coroner Mike Neville said Wednesday.

Among the groups contacted in the search for next of kin for veterans is the local group Bo's Blessings, set up in 2013 and led by Jannie D. Layne of Springdale in honor of her son, James "Bo" Allen Swearingen II. Swearingen was an Army veteran active for years in helping other veterans before his death in a motorcycle accident that also took the life of his wife, Lori, in 2010.

After the search for next of kin proved fruitless in the four cases, the coroner, the federal Department of Veterans Affairs and the host of volunteers contacted through Bo's Blessings social network made plans for a memorial. Veterans contacted through Bo's Blessings volunteered, including the Patriot Guard Riders, who provided a motorcycle escort for the veterans' remains to the cemetery from the coroner's office.

All four veterans had been cremated, their ashes placed in boxes less than a cubic foot each.

"My husband was in the service, and my brothers," said Karen Owens of Bethel Heights when asked why she attended a service for homeless men she had never met. They should not be buried alone and without being honored, she said.

"You're going to make me cry," Owens said.

Army veteran Dan "Rooster" Cochran of Huntsville said the fact he never, to his knowledge, met any of the four men made no difference. "I just hope they can find one person who will admit to knowing me when my time comes," Cochran joked.

Chaplin Christopher C. Gueydan, a major in the Army National Guard and a chaplain for the Veterans Health Care Center of the Ozarks, gave opening and closing prayers at the service.

The service included a three-volley rifle salute by the Rogers American Legion post Honor Guard and ended with a bugler playing taps. 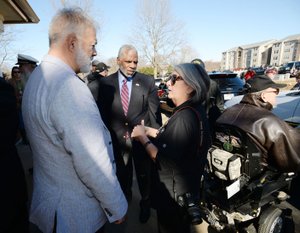