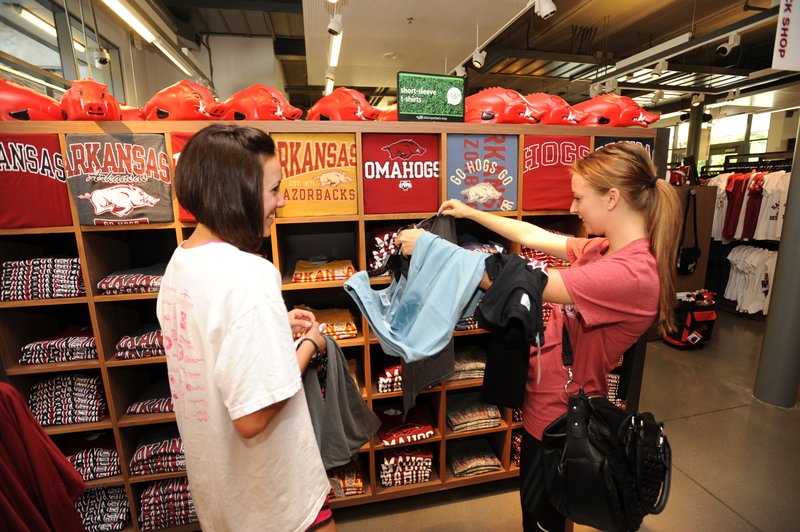 FILE — In this 2012 file photo, Jaclyn Curtis of Katy, Texas, left, and friend Taylor Dorton of St. Louis, both University of Arkansas students, shop for Razorbacks T-shirts at the UA Bookstore at the Garland Center on the UA campus in Fayetteville.

FAYETTEVILLE -- A notice published by the University of Arkansas, Fayetteville states it will begin negotiations with Barnes & Noble to manage its campus bookstore with the "ultimate goal" of reaching a deal.

Some 16 UA employees would likely lose their current benefits -- which include tuition waivers for employees and their families -- if the transition is made to employment under private management.

The Arkansas Public Employees Union Local 965, which represents about 45 faculty members and staff at UA, issued a statement in October opposing the privatization of services, including the bookstore, by the university.

Cale Fessler, UA associate vice chancellor for budget and financial planning, in a statement said the intent-to-award decision was made after on-campus presentations made by finalists. Fessler chaired the proposal evaluation committee, which recommended Barnes & Noble to operated and manage the main campus bookstore and the store in Rogers.

"We are now working to negotiate an agreement. We look forward to working together to provide an experience that makes our stores a destination for campus, the community, fans and other visitors," Fessler said.

Financial details provided by a UA spokesman show bookstore income of $13.6 million that exceeded operating expenses of $13.2 million in 2018-19. But in addition to operating expenses, the university had more than $1 million in annual debt service related to construction of the campus Garland Center, where the bookstore is located.

Mark Rushing, a UA spokesman, has said that university leaders "expect that the bookstore's income will be greater than the total operating expenses, including the debt service payments for the construction of the facility, in the near future."

Bidders were asked to provide detailed information about textbook pricing and "plans to deal effectively with changing types of course materials," according to the UA's request for proposals. Industry leaders told the Democrat-Gazette in October that the increased use of digital course materials poses a challenge to campus bookstore operators trying to bring in customers.