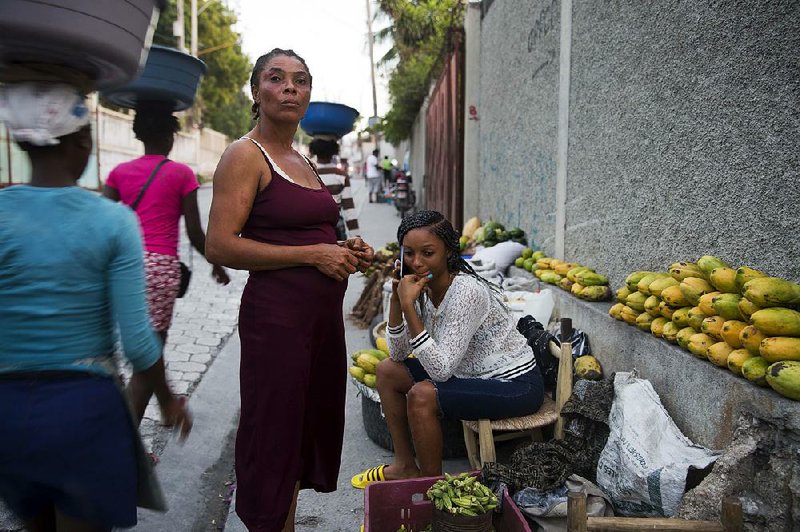 Wadlande Pierre (right) helps her mother, Vanlancia Julien, at their fruit and vegetable stand in the Delmas neighborhood of Port-au-Prince, Haiti. Julien said she lost a couple hundred dollars’ worth of produce because of recent protests that prevented her from selling on the street.

PORT-AU-PRINCE, Haiti -- The flaming barricades are mostly gone, protests have largely dissipated and traffic is once again clogging the streets of Haiti's capital, but hundreds of thousands of people are now suffering deep economic aftershocks after more than two months of demonstrations.

The protests that drew tens of thousands of people at a time to demand the resignation of President Jovenel Moise also squeezed incomes, shuttered businesses and disrupted the transportation of basic goods.

"We are nearing a total crash," Haitian economist Camille Chalmers said. "The situation is unsustainable."

Haiti's economy was already fragile when the new round of protests began in mid-September, organized by opposition leaders and supporters angry over corruption, spiraling inflation and dwindling supplies, including fuel. More than 40 people were killed and dozens injured as protesters clashed with police. Moise insisted he would not resign and called for dialogue.

The United Nations World Food Program says a recent survey found that 1 in 3 Haitians, or 3.7 million people, need urgent food assistance and 1 million are experiencing severe hunger. The program, which says it is trying to get emergency food assistance to 700,000 people, blames rising prices, the weakening local currency and a drop in agricultural production blamed partly on the disruption of recent protests.

In the past two years, Haiti's currency, the gourde, declined 60% against the dollar and inflation recently reached 20%, Chalmers said. The rising cost of food is especially crucial in the country of nearly 11 million people. Some 60% make less than $2 a day and 25% earn less than $1 a day.

A 110-pound bag of rice has more than doubled in price in the local currency, said Marcelin Saingiles, a store owner who sells everything from cold drinks to cookies to used tools in Port-au-Prince.

The 39-year-old father of three children said he now struggles to buy milk and vegetables.

"I feed the kids, but they're not eating the way they're supposed to," he said, adding that he has drained the funds set aside for his children's schooling to buy food.

A growing number of families across Haiti can't even afford to do that since the protests began, with barricades preventing the flow of goods between the capital and the rest of the country.

Many of those families live in Haiti's rural areas, which also have been hit by demonstrations that continue in some cities and towns.

Wadlande Pierre, 23, said she temporarily moved in with her aunt in the southwest town of Les Cayes to escape the protests in Port-au-Prince. However, she had to move back to the capital because there was no gas, power or water in Les Cayes, and food was becoming scarce.

"There is no access to basic items that you need," she said.

Pierre is now helping her mother, Vanlancia Julien, sell fruits and vegetables on a sidewalk in the Delmas neighborhood in the capital.

Julien said she recently lost a couple of hundred dollars' worth of produce because she could not go out on the street to sell while protests were going on.

"All the melon, avocado, mango, pineapple, bananas, all of them spoiled," she said.

Last year, sales were good, but she is now making a third of what she used to earn before the protests began, even though streets have reopened.

"That doesn't amount to anything," she said. "The fact that people don't go out to work, it's less people moving around and makes it harder for me."

Chalmers warned that economic recovery will be slow if the political instability continues, adding that the situation is the worst Haiti has faced in recent years.

"A lot of crises came together," he said. "Not only the economic one, but the political and fiscal ones."