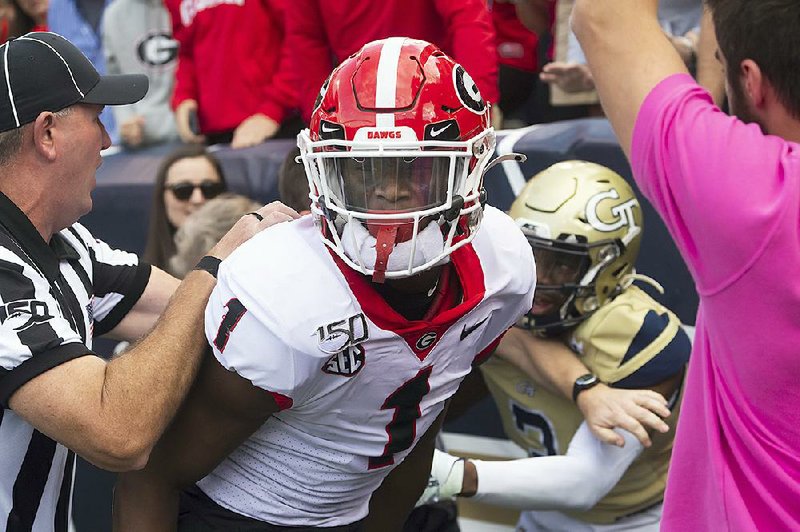 Referees separate Georgia wide receiver George Pickens (1) and Georgia Tech defensive back Tre Swilling during a fight in the end zone during the second half of Georgia’s 52-7 victory over Georgia Tech on Saturday. Pickens was ejected from the game and will miss the first half of Saturday’s SEC Championship Game against LSU.

ATLANTA -- Jake Fromm may be relying on some new starters around him when the SEC title -- and a spot in the College Football Playoff -- is on the line for No. 4 Georgia.

Fromm insists Georgia's offense will be ready for Saturday's SEC Championship Game against No. 2 LSU.

Leading receiver Lawrence Cager had shoulder surgery late last week and may be done for the season. When announcing the injury after a 52-7 rout of Georgia Tech, Coach Kirby Smart said Cager would make a full recovery but is doubtful for a bowl or playoff game.

Georgia (11-1) also lost another top receiver, George Pickens, for the first half of the SEC title game. Pickens was ejected in the second half against Georgia Tech for throwing a punch.

That's a significant drain on the Bulldogs' depth at wide receiver.

"We're ready," Fromm insisted. "Guys are ready to step up and fill that role."

Pickens was held out in the first half against Georgia Tech as punishment for an undisclosed violation of team rules. Then the freshman landed in a fight with Georgia Tech cornerback Tre Swilling.

Cager and Pickens are tied for the team lead with 33 catches. Pickens' total includes a 41-yard touchdown grab against the Yellow Jackets.

Fromm has struggled recently even with a full cast of receivers. He enters his third consecutive SEC Championship Game having failed to complete half of his passes in four consecutive games.

Fromm had a slow start against Georgia Tech with four straight incompletions but finished strong, matching his high with four touchdown passes. He completed 14 of 29 passes for 254 yards.

Georgia's offense was handed yet another blow when top rusher D'Andre Swift went out with a shoulder contusion in the third quarter. Smart downplayed the injury and said he is counting on Swift to play against LSU.

"We expect D'Andre to be fine," Smart said Sunday.

Tigers Coach Ed Orgeron said he doesn't expect Swift's injury or Georgia's issues at receiver to have an impact on the game at Mercedes-Benz Stadium in Atlanta.

"Obviously with a big game like this, people miraculously get well toward the end of the week," Orgeron said. "I expect the best players to play.

"But a team like Georgia has recruited well, so it's the next-man-up theory. We have the same thing. Next man up. Those guys will play just as well as the starters. I don't think it will be an advantage for us at all."

Uncertainties at wide receiver and running back add to the Bulldogs' already daunting challenge with a spot in the playoff at stake. Brian Herrien, Zamir White and James Cook combined for 18 carries behind Swift.

Asked about the Bulldogs' possible plan against LSU if Swift is limited or can't play, Herrien said "just run the ball."

"There's no slack," Herrien said. "I don't think we'll miss anything. We have other great running backs, so I feel like we'll be fine and I feel like he'll be back, too. So we'll be OK. I talked to him. He said he'll be all right."

Georgia coaches already made plans to move on without Cager. The loss of Pickens, a freshman, for the first half of the SEC title game was an unexpected hit to Georgia's depth.

Georgia Tech was called for two pass interference penalties when trying to defend Pickens before his touchdown catch. Then came the tussle with Swilling.

"When you make emotional decisions, that's what happens," Smart said. "Ask yourself why would I give up an opportunity for what we have next week, and for what? We've got to try to help George."

That help may include feedback from players.

Fromm said Pickens' ejection was "tough" for the team.

"Not really making the best decision in the heat of the moment," the quarterback said. 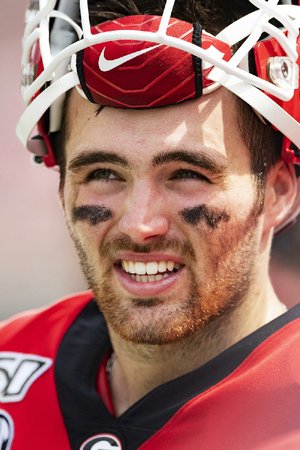