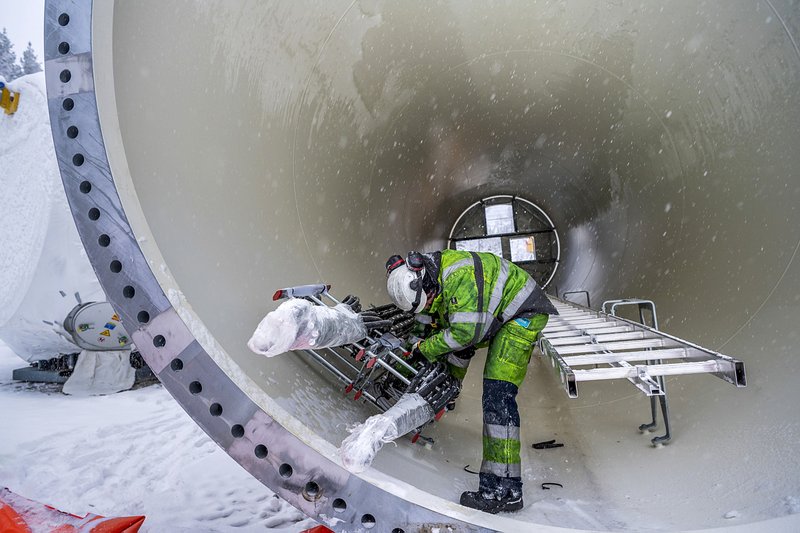 A contractor works inside a wind turbine tower waiting to be installed at the Markbygden wind park project near Pitea, Sweden recently.

Workers are installing turbines perched atop towers 430 feet tall at a rate of about two a week at the site in northern Sweden, where the temperature regularly dips below 14 degrees Fahrenheit and the sun is hardly seen for months on end during winter. So far, more than 170 of the machines scatter across the sparse landscape owned by some of the nation's biggest forest companies.

Markbygden, as the site is called, may be the clearest sign yet of the industry's seismic shift away from subsidies and toward relying on markets that also set returns for traditional plants running on natural gas, coal or nuclear energy. It's also a harbinger for the giant facilities that will be needed for nations to meet the climate targets they're discussing at the United Nations' Climate Change Conference in Madrid this week.

The wind farm has drawn investors from a wide spectrum of energy and high finance. Companies including General Electric Co. and Macquarie Group Ltd. will spend as much as $7 billion on the facility. It will be vital to Sweden's power supply as two old reactors are due to close permanently next year, as well as for power exports to the continent. Some of the electricity also will be sold to customers, including aluminum producer Norsk Hydro ASA under a deal that was the biggest of its kind at the time when signed two years ago.

The expansion of wind power sweeping northern Sweden has been likened to the Texan wind boom of the past few decades, which turned the state into the biggest producer in the U.S. The high plains may look very different from the Swedish forests, but they both provide vast expanses of land with favorable breezes steady enough to spin turbines.

"When it comes to wind power, Sweden has more in common with Texas than the rest of Europe," Roland Flaig, head of RWE AG's renewable energy arm in Sweden, said in an interview. "Few and big land owners makes it possible to build larger parks."

When the facility is completed in the next decade, it will be connected by a network of graveled roads stretching longer than from London to Paris. Two power lines on pylons cut through the flat landscape where the turbines are the only other landmarks.

Developed by closely held Svevind AB, the Markbygden facility sprawls across 111,000 acres. It had just six inhabitants when construction began in 2012. At its busiest, 600 to 700 people work on the site. Most of them lodge in nearby Pitea, and the Finns have built a sauna on-site. The area is still used for hunting and snowmobile excursions by locals.

But the nation's boom is more than Markbygden. Several other big projects by developers, including OX2 AB and Arise AB, are underway, and wind power output in the Nordic region's largest economy is expected to double in the next three years. Companies say they prefer Sweden over Germany for example, citing the relative ease of getting permission for big parks.

"When we started this, we went looking for land which few other people where interested in using," Mikael Kyrk, chief of operations at Svevind, said on a blisteringly cold morning during an interview in some barracks at the site. "This is a very sparsely populated area with good winds where the owners' interests fit very well with our interests."

The park will provide a second income, while not taking up more than 3% of the area for one of the land owners SCA AB's main forestry business, said Mikael Kallgren, its head of renewable energy. Svevind will pay a leasing fee, calculated as a share of the net income for power generation each year.

When the park is completed, it will generate almost as much power as the two reactors at Vattenfall AB's nuclear plant in southern Sweden. That will help maintain a national surplus and push exports through new cables to markets from Germany to the U.K., where onshore installations have plunged.

New capacity in Germany, Europe's biggest renewables market, slumped to 0.3 gigawatts in the first half of the year, compared with 2.4 gigawatts in 2018. Still, onshore wind met as much as 17% of the nation's power last year.

For Sweden to meet a political goal of generating all power from renewables by 2040, installed onshore capacity would need to almost triple in the next 20 years, according to RWE. That would exceed today's capacity in Texas.

Onshore wind is already one of the most mature renewable sectors, growing rapidly since sales took off in the early 1980s. While the offshore industry is getting a lot of hype because of its even bigger towers and blades, Bloomberg New Energy Finance estimates that there's not a single year until at least 2050 when there will be more new capacity at sea than on land in Europe.

That means onshore will continue to play a vital role in the energy transition, not only by crowding out fossil-fuel plants in Europe, but around the globe, too. The biggest growth markets through 2023 will be China and the U.S., according to Bloomberg New Energy Finance. The world's biggest onshore wind park will be the Ulanqab wind project in the Inner Mongolia region of China, set to come online in 2022, Bloomberg New Energy Finance data show.

The climate envoys from almost 200 countries meeting in Madrid in the first half of December will discuss how to take the Paris Agreement forward by encouraging renewable energy over burning hydrocarbons.

"Cheaper, better-performing turbines, smarter operations and maintenance, and lower finance costs will continue to bring down the price of onshore wind and drive the sector globally," said Oliver Metcalfe, an analyst at Bloomberg New Energy Finance in London. "The technology will play a vital role in the energy transition."

Information for this article was contributed by Hayley Warren of Bloomberg News.