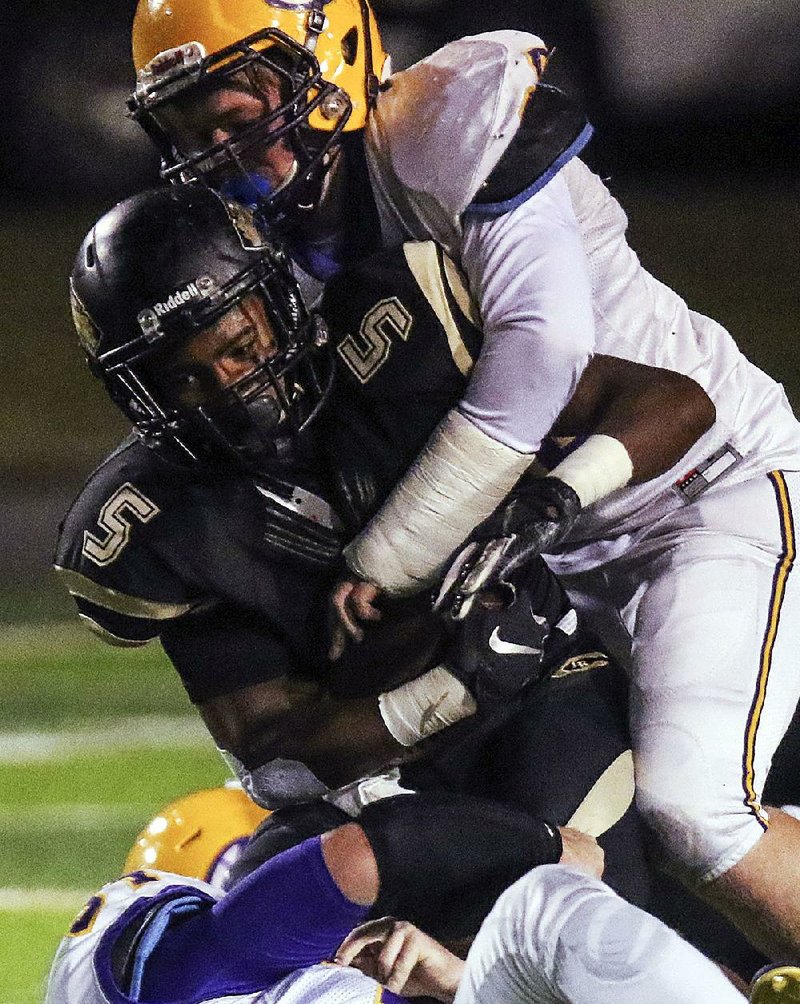 Little Rock Central running back Sam Franklin, here being tackled by Little Rock Catholic’s James Owens during a Nov. 1 game at Quigley Stadium in Little Rock, is one of the key returning players for the Tigers.

Before and during his first season as the Little Rock Central football coach, Kent Laster began work on a new image for his team.

Laster was hired to direct Central football before the 2018 season. He began to work with friends of his in graphic arts to design a new Tiger for his players' helmets, and new banners and posters that now decorate the offices and hallways of Quigley Stadium, Central's home field.

Tigers at a glance

The gold-and-black colors combine to celebrate Central's historic role in the American civil-rights movement and the school's once-dominant football program. For instance, the Tiger has nine stripes to represent the Little Rock Nine.

The posters around Quigley also emphasize Central's 32 state and 44 conference championships won between 1946 and 2004.

"I've had kids tell me they never knew Central had won the way we have over the years," Laster said. "That's something we stress every day."

Central completed Laster's first season at 1-8-1, but players and coach alike say a turn toward success is underway. Laster listed goals for his team, beginning with a winning season, followed by a conference championship and finally playing games after Thanksgiving.

"We expect a great season this year, a season we haven't had in a long time," Laster said. "From top to bottom, it matters to our players. They're holding each other accountable. The relationships between the players, and coaches and players, in all of those there are lines of trust that special things can happen, and we expect them to happen."

Thirteen players with experience as starters return, led by senior captain and outside linebacker Kylan Jones.

"Coach Laster takes a lot of time to help us be winners, not only on the field but also in life," Jones said. "To get where we want to be, it's going to take leadership, pride and hard work each and every day."

"If you look at the films of Kylan from last year to this year, it looks like two different people," Laster said. "He is active. He knows how to take on blocks, and he's a tough guy. He runs well, and he's violent now. He believes, and he understands what the weight room has done for them."

"A lot of our guys have gained in the weight room, gained 30, 40, 50 pounds in their major core lifts, plus they've had a year of playing under the lights," Laster said. "They've taken in another year of experience and wisdom, and they're going to be a lot better."

Jones leads three other senior linebackers in Central's 3-4 defensive alignment. He is expected to line up with fellow outside linebacker Caleb Morton and inside linebackers Cedric Small and Kieran Blaylock when Central plays West Memphis in the season opener for both teams at War Memorial Stadium in Little Rock tonight.

Gunn will hand the ball to junior running back Sam Franklin. Lasker said Franklin rushed for just under 800 yards in 2018.

"He runs real well, and he's gotten a lot stronger," Laster said of Franklin. "The weight room has worked really well for him."

Kickoff for Central's game with West Memphis today at War Memorial Stadium in Little Rock is scheduled for 5 p.m.