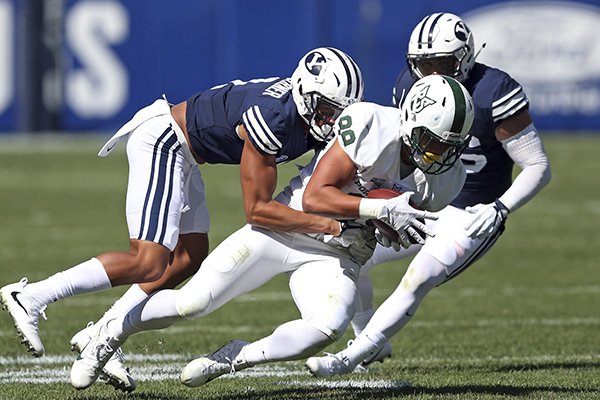 "I'm sure Arkansas' threes are more excited than their ones and twos with us coming in," Barnum said. "Those guys are calling their girlfriends and moms and grandparents and saying, 'I'm going to get to play Saturday.'

"Those threes are going to make sure their socks are on right-side out and their stuff is all tucked in, because they're probably expecting to get in after that first quarter."

Portland State is a Football Championship Subdivision team that plays in the Big Sky Conference and is 4-36 against Football Bowl Subdivision teams -- including 1-18 against Power 5 conference opponents -- but Barnum was reminded Arkansas finished 2-10 last season.

"Yeah, Arkansas was 2-10, but they're in the SEC," Barnum said. "I'd like to have a hurricane roll in unexpected for the game, maybe right after our first possession. That would probably help us a lot."

The forecast calls for a 25% chance of rain on Saturday, but no hurricane.

"We're going to have to play one hell of a game," Barnum said. "The odds guys in Las Vegas don't give us a snowball's shot in hell to win, but we have to make sure we don't lose the game before we get there.

"I've told our guys to make sure we don't beat ourselves. Let's be crisp, lets be clean, let's have all the gears greased and make them beat us.

"If we do all that, pop a couple turnovers and win the field position battle with special teams, who knows what's going to happen? We might have a shot."

FCS teams have won 87 games against FBS teams since 2009, according to NCAA statistics, including Illinois State's 35-19 victory at Colorado State last season two weeks after the Rams beat the Razorbacks 34-27.

Arkansas Coach Chad Morris was in his first season at SMU in 2015 when James Madison beat the Mustangs 48-45.

Three SEC teams have lost to FCS schools in the previous nine seasons with Jacksonville (Ala.) State beating Ole Miss 49-48 in double overtime in 2010, Georgia Southern beating Florida 26-20 in 2013 and The Citadel beating South Carolina 23-22 in 2015.

In Arkansas' first game as an SEC member in 1992, The Citadel beat the Razorbacks 10-3.

"Honestly, FCS teams get jacked up for these games," Barnum said. "Probably half my team thinks they should be playing in the SEC. They're wrong, but they're excited about playing Arkansas."

Senior tight end Charlie Taumoepeau, 6-3 and 245 pounds, is a returning FCS All-American for the Vikings who SEC teams probably would like to have on their roster. He has 81 career catches for 1,402 yards and 9 touchdowns.

"He's a talent," Barnum said. "I think right now he's ranked about a fourth-round pick by the NFL scouts.

"He's got sneaky speed. Oregon couldn't catch him last year once he got going. He runs by everybody in our conference. Just very athletic. We're expecting him to keep us in some games this year."

"He's not the 6-5 SEC guys Arkansas is used to seeing," Barnum said. "You're going to look at him and think he's a high school kid he's so short. But he can run, though I think he prefers to throw it. He's a gunslinger and has a big arm, and is very tough."

Barnum said Portland State runs a multiple offense with West Coast passing principles, at times will go with four or five receivers and also utilizes the Pistol formation in which a running back lines up 3 yards behind the quarterback.

Defensively the Vikings play a five-man front, Barnum said, and use zone and and man-to-man coverages.

"We need to give Arkansas a long field," Barnum said. "It's hard to drive 80 yards every time you get the football. I don't care who you're playing."

Arkansas is the first SEC opponent for the Vikings, whose previous Power 5 games have been against Oregon, Oregon State, Washington, Washington State, Arizona State, California and TCU.

"Obviously, we call it a money game," said Barnum, referring to the $550,000 guarantee Arkansas is paying according to the Portland Tribune. "We have two money games this year. We go to Arkansas and we go to Boise State [on Sept. 14], and that pays for just about every sport in this athletic department. It gives us just under a million dollars.

"The flip side is that it's an opportunity for my guys to experience the pageantry of the SEC. Playing at Arkansas is something they'll remember forever."