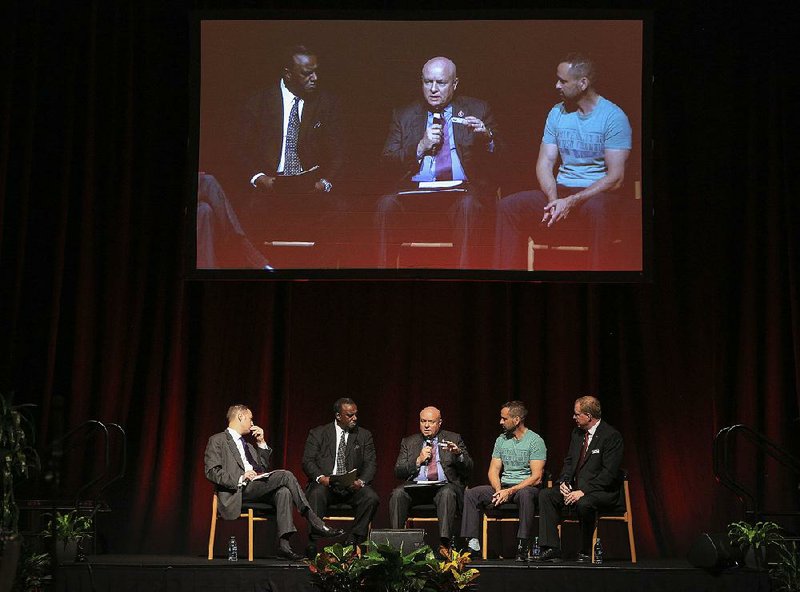 Pulaski County school district superintendents on Thursday described for nearly 200 business leaders and other education stakeholders their commitment and enthusiasm for cooperatively reconfiguring the county's 10 high schools into career-focused academies.

"Historic" and "game-changing" were among the words the school district and business chiefs used to convey the significance of the planning -- still in the early stages and relying on the Ford Next Generation Learning model -- to transform high schools into academies to better prepare students for both college and careers.

"We're working through things that maybe in the past were barriers in this county," Little Rock Superintendent Mike Poore said about the interdistrict collaboration that is being spearheaded by the Little Rock Regional Chamber and aided by other chambers of commerce in the county.

"We're finding ways to make this happen, smashing right through it, jumping over it, going around it, going under it -- whatever."

Bryan Duffie, superintendent of the Jacksonville/North Pulaski School District, said that knowing history is important "but it is past time to look forward and move forward, and that is what we need to do."

"Join up with us to get the job done," North Little Rock Superintendent Bobby Acklin invited the assembly in asking for their expertise, ideas and workplace needs. "We don't have all the answers. We kind of know the direction we're going. We just ask that you come to the table with us to serve our kids."

The superintendent panel, which included Pulaski County Special School District Superintendent Charles McNulty, was the latest in the quarterly series of Power Up Little Rock events, which are meant to highlight economic development and other issues in central Arkansas and the state. The series is hosted by the Little Rock Regional Chamber of Commerce and sponsored by Arvest Bank.

[Video not showing up above? Click here to watch » https://www.youtube.com/watch?v=7ArYCyehYso]

The career-academy school model pairs traditional academics with project-based learning and real-world problem-solving in career fields such as medical professions, building trades, law and law enforcement or the STEM fields of science, technology, engineering and mathematics.

Ford Next Generation Learning -- an arm of Ford Motor Co. -- has assisted about 35 communities over more than a dozen years to establish the career-focused academy model, including in the Nashville, Tenn., public schools.

Ultimately the plans for each Pulaski County high school are likely to include a freshman introductory academy to be in place as soon as the 2020-21 school year, with other career academies to follow that are ideally made up of 200 to 250 students each.

The vision-setting component of the planning in Pulaski County is to take place at a daylong session Sept. 12 at the North Little Rock Chamber of Commerce office.

Hundreds of people are being invited to participate in that effort, which will start with determining the skills and knowledge that students should have upon graduation, James Reddish, the chamber's executive vice president, said. From there, the planning will focus on the steps necessary to reach those graduation goals.

"It gets back to kids having the remarkable ability to rise to the level where we set the expectations," Reddish said. "To me this -- at its core -- is about taking that bar and raising it to the rafters."

Poore told the audience that the model that calls for students to interact with and/or serve internships with businesses "makes sense," is "solid" and "foundational." Students who participate in programs that make education relevant to them "will shock you with what they are able to do," he said.

"We haven't always set the stage as adults to let them lead," he said.

The superintendents highlighted possible academy themes based on already existing courses in their schools. Duffie noted that the Jacksonville district's already established cybersecurity and health-professions courses could become academy themes.

McNulty noted that he works with as many as six communities in the expansive Pulaski County Special district, each of which has unique needs. The district and its communities will work with the local business chambers -- be it in Maumelle or Sherwood or elsewhere -- to determine the best career pathways for the areas of the district.

He noted that Mills High in the southeast, rural part of the county has a video-production program. He urged the business people to reach out to students in outlying parts of the county where they don't typically work or travel.

Questions from the audience Thursday centered on the role that parent organizations in the schools can play and whether the state's agricultural industry will have a place in the academies.

Carol Fleming, the president of the Arkansas Education Association teachers union, asked for and received assurances that special-education students will be included in the academies.

"It's non-negotiable," McNulty said. "We must be inclusive."

Patrick Schueck, president of Lexicon Inc., extolled the Ford Next Generation Program model that he saw when he and other business leaders visited Nashville, Tenn., schools. He marveled at the Nashville high school students who not only are motivated to attend their classes and enjoy them, but also have specific plans for their futures -- and backup plans in the event that the first plans don't work out.

Schueck said what he saw in Nashville students was extremely powerful and he welcomed the potential for Pulaski County.

"As a business community, the No. 1 thing we can do is act as a pipeline to give you success in the classroom," he told the superintendents. "So that means, whatever you need. We are not here to tell you how to do it. We are here for you to tell us what you need and we will execute on your need."

Jay Chesshir, the Little Rock Regional Chamber's president and chief executive, noted that as of this school year, all four districts in Pulaski County now allow interdistrict transfers, which will enable students to participate in college and career academies in county districts other than the ones in which they reside.

"We have done amazing things in most of these school districts," Chesshir said, "but it was in tens and 20s [of students] or maybe 100s in a couple of cases. We recognized that we needed to do something that scaled up so we could reach thousands and tens of thousands," he said, praising the districts for their quick agreement to participate.

He called the academy model the new future of Pulaski County. 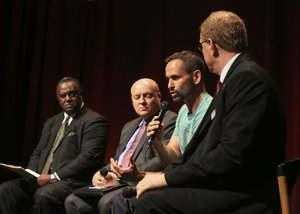