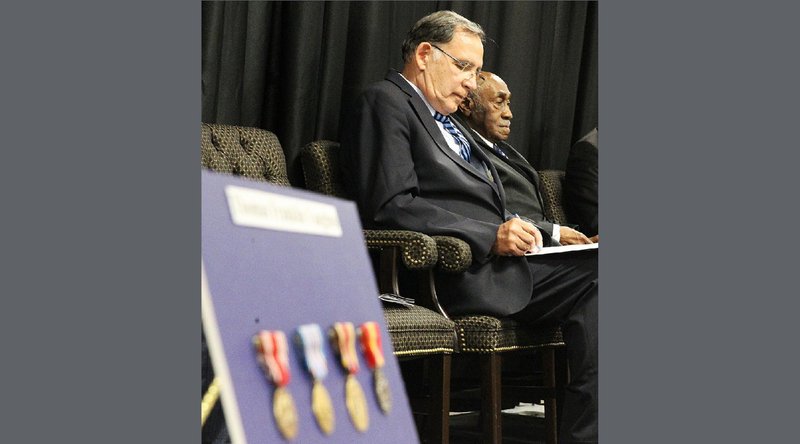 With his World War II medals in the foreground, 99-year-old World War II veteran Thomas Franklin Vaughns (right) sits with U.S. Sen. John Boozman, R-Ark., at the University of Arkansas at Pine Bluff on Wednesday. Video is available at arkansasonline.com/822medals.

PINE BLUFF -- In his 99 years, Thomas Franklin Vaughns of White Hall has seen service on his family farm, in the U.S. Army as a member of the original Tuskegee Airmen, AmeriCorps VISTA, Delta Service Corps, and 4-H Clubs of America, to name a few.

On Wednesday, at the University of Arkansas at Pine Bluff, he was honored with the presentation of five medals from the Army for his service in World War II and Korea.

Four of those medals -- the World War II Victory Medal, the American Campaign Medal-World War II, the Good Conduct Army Medal, and the Honorable Service Lapel Button -- were replacements for medals Vaughns had received but that have been misplaced over the years.

But one medal, the National Defense Service Medal for his service in the Korean War, Vaughns never received until now.

[Video not showing up above? Click here to watch » https://www.youtube.com/watch?v=RdTF5lmeEtM]

Asked why, Vaughns said simply, "Well, we were so glad to get out of there, I was just ready to come home."

"We all know about his great career in the military, going off at a young age to serve his country, willing to do whatever he was asked to do," Boozman said. "Then he came home and, like the greatest generation, rebuilt the country."

Boozman remarked that after Vaughns returned home, he embarked upon a career in education and served as a mentor to many young people over the years.

"He's a hero in every sense of the word," Boozman said, "not because of his military service -- that's part of it -- but he's a hero because of the way he's lived his life."

"Despite indignities offered because of the color of your skin, you still persevered," Sen. Flowers said.

She then presented Vaughns with a Senate citation signed by herself and Senate President Pro Tempore Jim Hendren, R-Gravette.

Rep. Flowers gave Vaughns a House citation signed by Flowers, Rep. Ken Bragg, R-Sheridan, who she said was out of the country and could not attend, and House Speaker Matthew Shepherd, R-El Dorado.

Rep. Flowers noted that the armed forces in the U.S. was segregated until 1948, two years after Vaughns received his discharge after his service in World War II.

"You are the ultimate patriot and the ultimate hero because you served when even by law and by practice many said you couldn't and you shouldn't," Flowers said. "There was discrimination on every level of society and you served despite that."

Also, the office of U.S. Rep. Bruce Westerman, R-Ark., presented Vaughns with a copy of a speech honoring him that was entered into the Congressional Record. Pine Bluff Mayor Shirley Washington declared August 21, 2019, as Thomas Franklin Vaughns Day in the city. Vaughns also received awards and presentations from UAPB and from Barraque Street Missionary Baptist Church.

Vaughns talked about his years in education, doing volunteer work, and he pointed out several former 4-H Club members he had mentored over the years, calling them "my kids." At one point, he demonstrated that his sense of humor was still sharp after 99 years, eliciting a wave of laughter from around the room.

"These honors, I don't know whether I deserve these things," he said, then smiled broadly and added, "but, anyway, I'm enjoying it."

After the ceremony, several of the 4-H'ers in attendance, many of them now retired, talked about Vaughns' desire to mentor young people, many of whom, they said, would not have gotten an education had it not been for his efforts.

Elzadia Washington of Pine Bluff, who was there with Altha Washington Perry and Edna Conyer Washington, said the three met Vaughns when he was a county extension agent.

"He's the one who introduced okra to the community as a cash crop," she said. "And that sent all three of us to college right here at UAPB."

Ben McGee of Little Rock said Vaughns sent him and his two brothers to college at UAPB, making sure that they had the financial means to attend.

"I didn't have any money," McGee said. "When I got off the bus in front of Caldwell Hall on Sunday morning, I had 20 cents in my pocket. I got on this campus and never got a penny from home in four years. I got on work study, got in the agriculture department and worked every evening on the college farm."

McGee said both of his brothers followed him to college, all with the help of Vaughns.

"Mr. Vaughns, he told the president that he wanted his boys here," he said. "So we got in."

Vaughns said he spent a lot of time working with young people to get them in school at UAPB.

"I probably brought 80 or 90 kids here in my time," he said. "Education is important. Very important."