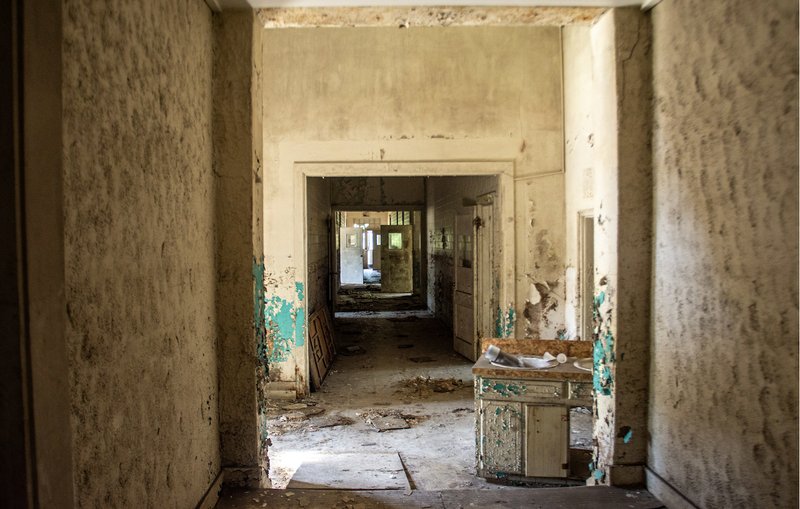 This is Part 3 of a series for which writer and photographer Cary Jenkins is visiting the seven structures added in 2019 to Preserve Arkansas’ list of most endangered historic places, Seven to Save.

See Parts 1 and 2 at arkansasonline.com/endangered.

MALVERN — Some of the best memories Hank Mitchell has of Tuggle Elementary took place in the auditorium. The school, also known as the Malvern Rosenwald School, was listed in May as one of Preserve Arkansas' Seven to Save endangered historic buildings.

Built in 1929 for black students, The Julius Rosenwald Fund, known for helping to build schools in rural areas and for black communities, helped pay for the construction.

The entrance to the original building leads directly into the auditorium where Mitchell, board president of the nonprofit Tuggle Restoration Organization, remembers participating in a performance. "I had never been a part of anything like that before. Never even heard of kids doing stuff like that. That was just really exciting to me."

He recalls there were a lot of musical performances and remembers one in particular where the boys were going to play a song, ''Blue Danube Waltz.'' He says the teacher told them, "Bring an instrument. I don't care what kind it is."

He explains they weren't really going to play the song, only mimic the performance.

"Well, you know, we didn't have no money. But my daddy did take me to the 10-cent store and bought me a harmonica. There were a bunch of us that had harmonicas," he said with a laugh. "We couldn't play — but we acted like we could. We put on a great show."

Standing in the middle of the auditorium recently, Mitchell says the tile-covered floor used to be wood. Overhead, the original ceiling is behind the metal grid of a suspended ceiling with many of the ceiling tiles missing or on the floor. The stage, however, is still solid and in good shape, Mitchell says.

He remembers how crowded the school was in the 1960s. Classes were held in the auditorium as there weren't enough classrooms — even after two additions had been constructed — one in the 1940s and one in the mid-1950s.

According to the school's National Register of Historic Places nomination form prepared by Ralph Wilcox, Arkansas Historic Preservation Program's national register and survey coordinator, the original building had eight classrooms and its front entrance had a gabled porch with four wooden posts. Most of the original large windows are covered by plastic siding. The roof of the original part of the building still has four gable-shaped attic vents.

Inside, a long hallway joins the original building to its two additions. Peeking inside classrooms finds evidence of vandals, including broken windows, some graffiti, strewn debris and broken air conditioners.

Inside one of the classrooms, Mitchell points to the outside windows and then the ones on walls that open to the hallway and a transom window over the door. He explains cross-ventilation was how the school was originally cooled. Open windows on both sides of a classroom allowed the air to flow throughout the building.

Two chimneys on the backside of the school are all that's left of a furnace that worked hard in the winter.

Water has done most of the damage in the original part of the school. Wooden floors with water damage have fallen through in two of the classrooms.

Renovations over the years included the addition of inside bathrooms, carpeting, the suspended ceilings, and chalkboards painted over or covered. Some changes were made by organizations that occupied the building when the school closed in the 1970s, including Head Start and programs of the Central Arkansas Development Council. At one point, Mitchell says, the Malvern Police Department had offices in the building and practiced maneuvers there.

Behind the school is a brick building, the cafeteria, and a wooden building that was an overflow classroom for the growing school in the 1950s. In that classroom, which hasn't been drastically altered but was used for storage, the chalkboard still bears writing. Just visible are parts of a language lesson, a section to note coming events and a place to put "Our Best Work." Student names are also visible.

"Marvin Thrasher. That's my buddy. He's a preacher also," says Mitchell reading the names. "Ralph Owens, his brother, is actually kind of helping us with this."

Mitchell hopes to bring life back to the school by having it occupied. "One of the things we are proposing is putting in a police substation."

"This building is so important to the city of Malvern's history," he says.

According to an entry on Rosenwald Schools in the Central Arkansas Library System Encyclopedia of Arkansas written by Ralph Wilcox, there were 389 Rosenwald buildings in Arkansas. Only 15 of those buildings remain.