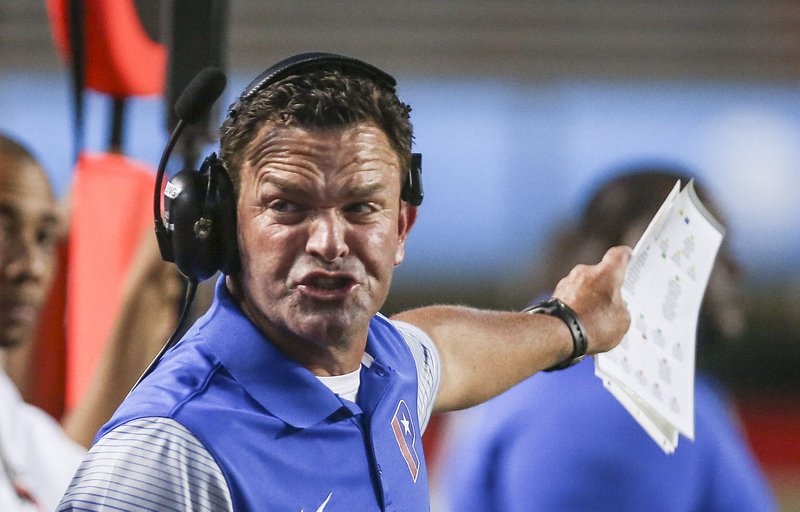 Little Rock Parkview Coach Brad Bolding is in his third season with the Patriots. Bolding previously coached at Mayflower and North Little Rock.

Two years removed from winning one game, Little Rock Parkview was a handful of points away from winning eight games and finishing above .500 overall for the first time in almost a decade last fall.

Asked whether Parkview's rebuild is ahead of schedule, third-year Coach Brad Bolding said, "I think so."

"We have done well in team camps the last two years, but really this summer I think we did outstanding," said Bolding, who previously coached Mayflower and North Little Rock. "We were in eight-team camps. We were with the big dogs: North Little Rock, Bryant, all of the ones around here that are good. I thought we held our own, and it definitely helped us and made us better."

The Class 5A Patriots return 12 starters from a team that finished 5-6 overall and 5-2 in the 5A-Central. The Patriots lost two nonconference games by one point (20-19 at Class 6A Marion and 28-27 at Class 7A Rogers) and a first-round playoff game by two points (28-26 at Morrilton).

Junior quarterback Landon Rogers (6-4, 210 pounds) returns after completing 52 of 95 passes for 545 yards and 6 touchdowns last fall. Bolding expects to be much more balanced offensively -- Parkview averaged more than 300 yards rushing per game last season -- because of Rogers' development as a passer under the tutelage of offensive coordinator Clay Bemberg and former Arkansas and Dallas Cowboys quarterback Clint Stoerner.

"He can chunk the mess out of it," Bolding said of Rogers. "Our running game will be night and day better because I believe we'll be able to throw the ball a lot better."

Patriots at a glance

"We're young, and it is part of that sophomore group," Bolding said. "Altee's group was very, very good. Obviously not the same number of kids, but I think this group could possibly be more talented because of the linemen."

After building top-shelf programs at Mayflower and North Little Rock, Bolding said things seemingly as trivial as untied shoelaces were addressed with up-downs during the offseason.

Why? To excel in tight games.

"It's just to teach them that when you lose football games, you always lose them by a bunch of little mistakes," Bolding said. "It's always those things. Once we win one of those, it will be in their blood.

"That's got to be one of our goals this year. We'll have a close one and we need to pull it off."