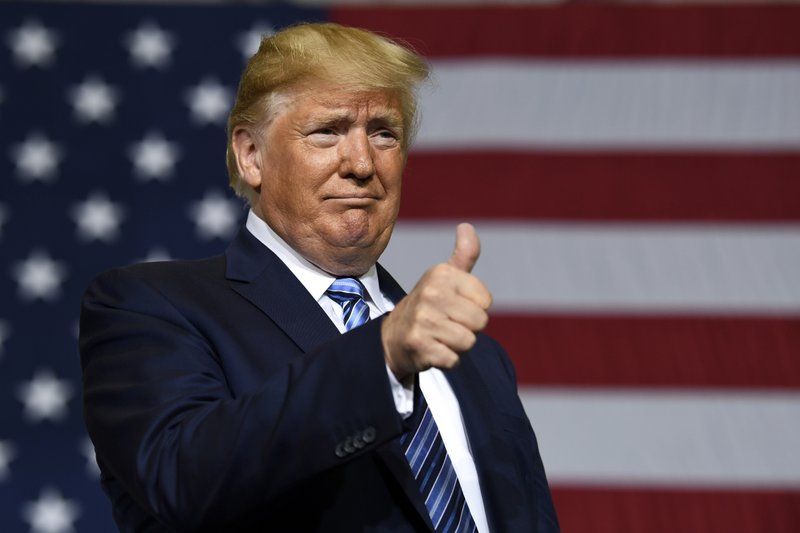 MONACA, Pa. -- President Donald Trump sought to take credit Tuesday for the construction of a manufacturing facility in western Pennsylvania.

Trump visited Shell's soon-to-be completed Pennsylvania Petrochemicals Complex, which will turn the area's vast natural gas deposits into plastics. The facility, which critics claim will become the largest air polluter in western Pennsylvania, is being built in an area hungry for investment.

Speaking to a crowd of workers, Trump said, "This would have never happened without me and us." In fact, Shell announced its plans to build the complex in 2012, when President Barack Obama was in office. A Shell spokesman said employees were paid for their time attending Trump's remarks.

Trump used the official White House event as an opportunity to assail his would-be Democratic rivals in the 2020 election, saying, "I don't think they give a damn about western Pennsylvania, do you?"

Critics accuse the Trump administration of pushing to increase the economy's dependence on fossil fuels in defiance of increasingly urgent warnings about climate change.

"We don't need it from the Middle East anymore," Trump said of oil and natural gas, proclaiming the employees "the backbone of this country."

Trump's appeals to blue-collar workers helped him win Beaver County, where the plant sits, by more than 18 percentage points in 2016, only to have voters turn to Democrats in 2018's midterm elections. In one of a series of defeats that led to Republicans' loss of the House, voters sent Democrat Conor Lamb to Congress after the prosperity promised by Trump's tax cuts failed to materialize.

Today, Beaver County is still struggling to recover from the shuttering of steel plants in the 1980s that pushed the unemployment rate to nearly 30%. Former mill towns like Aliquippa have seen their populations shrink, while Pittsburgh has lured major technology companies like Google and Uber, fueling an economic renaissance in a city that reliably votes Democratic.

Trump claimed that his steel and aluminum tariffs have saved the industries and that they are now "thriving," exaggerating the recovery of the steel industry, particularly when it comes to jobs, which have largely followed pace with broader economic growth.

The region's natural-gas deposits had been seen, for a time, as its new road to prosperity, with drilling in the Marcellus Shale reservoir transforming Pennsylvania into the nation's No. 2 natural-gas state. But drops in the price of oil and gas caused the initial jobs boom from fracking to fizzle, leading companies like Shell to turn instead to plastics and so-called cracker plants -- named after the process in which molecules are broken down at high heat, turning fracked ethane gas into one of the precursors for plastic.

The company was given big tax breaks to build the petrochemicals complex, along with a $10 million site development grant, with local politicians eager to accommodate a multibillion-dollar construction project.

But "fracking for plastic" has drawn alarm from environmentalists and other activists, who warn of potential health and safety risks to nearby residents and bemoan the production of ever more plastic. There has been growing alarm over the sheer quantity of plastic, which has burdened landfills, contaminated bodies of water and permeated the farthest reaches of the ocean. Microplastics also have been found in the bodies of birds, fish, whales and people, with the health effects largely unknown.

While many in Monaca see the plant as an economic lifeline, other residents, community organizations and public-health advocates were planning a protest Tuesday to coincide with Trump's visit.

Cheryl Johncox, an organizer with the Sierra Club who lives in Ohio, said that in addition to concerns about the safety of the air and groundwater, her group has heard from residents "dismayed these facilities will create single-use plastic."

"Of all the things we could invest in, of all the things we should be prioritizing, of all the companies we should be giving our taxpayer money to, this seems like the worst of all worlds," said David Masur, executive director of PennEnvironment, a statewide environmental advocacy organization, who called the project "a pretty big taxpayer boondoggle for a pretty dirty project."

Trump defended the investment in plastics, claiming pollution in the ocean is "not our plastic."

"It's plastics that's floating over in the ocean and the various oceans from other places," he told reporters before boarding Air Force One.

A spokesman for the company, Ray Fisher, said Shell has "dedicated a great deal of time and resources" to ensure emissions from the plant meet or exceed local, state and federal requirements. "As designed, the project will actually help improve the local air shed as it relates to ozone and fine particulates," he said.

A pro-fracking trade group said it would "applaud" the administration's energy policies.

"Affordable, abundant, local natural gas is powering a Rust Belt revival, as the region looks to gain a competitive edge in attracting advanced manufacturing -- and the good-paying jobs that come with it," said David Spigelmyer, president of the Marcellus Shale Coalition.

The project currently employs 5,000 construction workers. Once operational, however, the site will employ about 600 permanent employees.

And the area still faces other head winds. The nearby Beaver Valley Power Station, a nuclear plant that has employed 850 people, has announced plans to close in 2021. And the Bruce Mansfield Power Plant, once the state's largest coal-powered plant, announced Friday that it would close this fall, 19 months earlier than expected, at a cost of at least 200 jobs.

Information for this article was contributed by Mark Scolforo and Zeke Miller of The Associated Press.