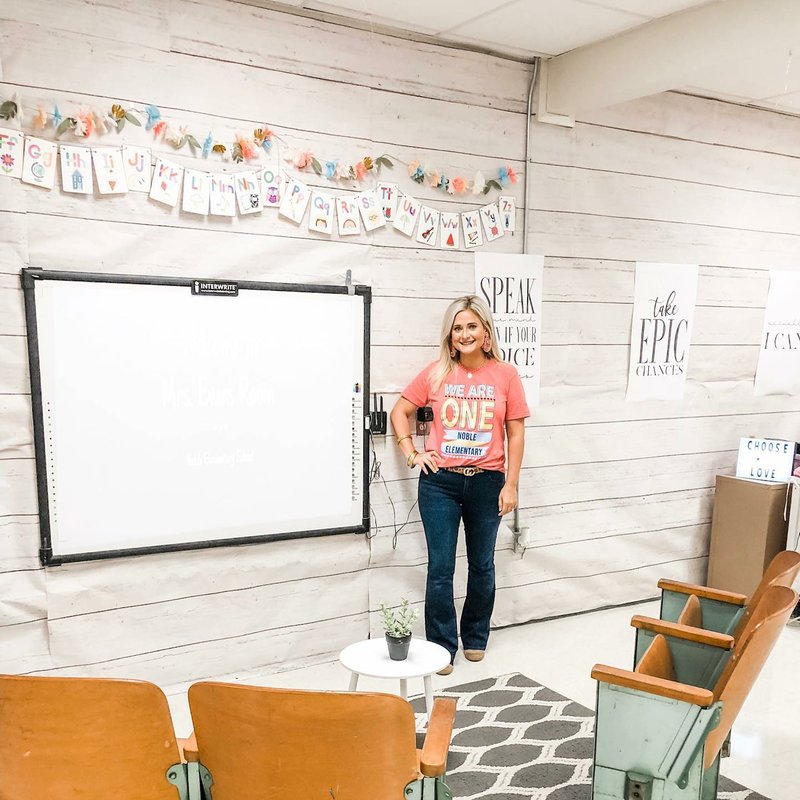 Evan Tubbs Owens stands in her newly-decorated classroom at Noble Elementary in Hamburg. A Facebook post she published Thursday about her classroom has received thousands of shares and comments. - Photo by Evan Tubbs Owens

An Ashley County teacher's Facebook post sharing photos of her classroom decorations last week went viral, receiving thousands of comments and shares by the first day of school on Tuesday.

Evan Tubbs Owens, a kindergarten through second-grade special education teacher at Noble Elementary School in Hamburg, has been collecting items for her classroom since she first started her career there seven years ago.

Since the post was first published on Thursday, “Classroom reveal 2019” has received at least 10,000 comments and been shared at least 13,000 times.

“I am so excited for the upcoming year,” the 28-year-old Hamburg native wrote in the post. “Still waiting on 1 table, but here it is!”

The post includes pictures of her classroom, its walls lined with paper that looks like wooden siding, with hammock chairs and auditorium seating strategically placed around the room, giant pencils on tables and not a desk in sight.

“I wanted to create a safe and warm environment for my students,” she wrote.

Owens said in an interview that the shiplap paper on the walls and the hammock chairs were new this year, as well as one of the rugs. The chairs, she said, were in the bedroom of her childhood home.

Most of the items in her classroom have been collected over the years by thrifting, repurposing or receiving them as gifts, the teacher said.

Owens said she’s been shocked by the attention her Facebook post received. The social media attention isn’t what it’s about for her, though, she said.

“I’m here for the students,” she said. That’s my first priority. Anything that I can do to make my students’ lives better, that’s what I want to do.”

In her post, the teacher offered to answer any questions people had about how she put together her classroom.

Owens said it’s important for teachers to encourage each other, and for individual educators to take the initiative to be creative. She also added that teachers shouldn’t be caught up in comparing their classrooms to others.