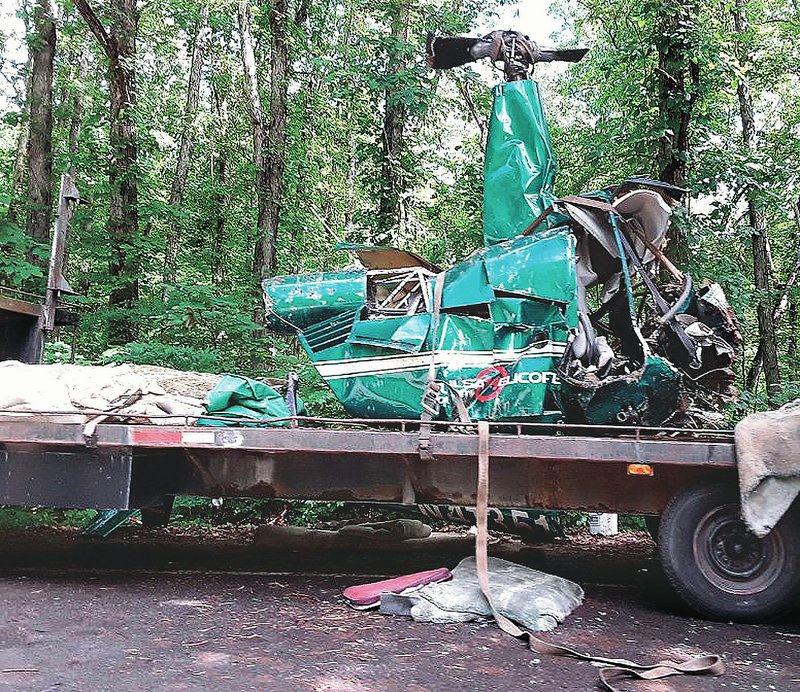 A wrecked Tulsa County Helicopter sits June 6 on a flatbed trailer on Arkansas 23 in Franklin County. Three people were killed June 2 and one was injured in the helicopter crash near Mulberry Mountain north of Ozark, according to officials.

A preliminary investigation into a June helicopter crash that killed three people and injured another details the ongoing investigation, but doesn't address the cause.

The crash happened June 2 during a music festival near Mulberry Mountain in Franklin County, north of Ozark, said officials with the National Transportation Safety Board.

The preliminary report was posted to the board's website Friday. The board is in charge of the investigation.

The final report could be available in 12 to 24 months, Keith Holloway, media relations specialist with the board, said Monday.

The flight originated from an open field at an undetermined time, according to the preliminary report. No flight plan was filed, and visibility was 10 miles.

A search was done after the helicopter was overdue. The helicopter collided with trees and came to rest in rugged, heavily wooded terrain near Cass, according to the report.

The pilot, Chuck Dixon of Tulsa, Okla., and passengers Sarah Hill of Austin, Texas, and Marco Ornelas of Mexico died in the crash, according to Franklin County Sheriff Anthony Boen.

The lone survivor, Zachary Peterson of Omaha, Neb., was treated at St. Francis Hospital in Tulsa.

Tulsa County Helicopters had been giving tours during the festival. The company is based at Jones Riverside Airport in Tulsa and began operation in 2008, according to a company news release.

Print Headline: No cause cited in helicopter crash report