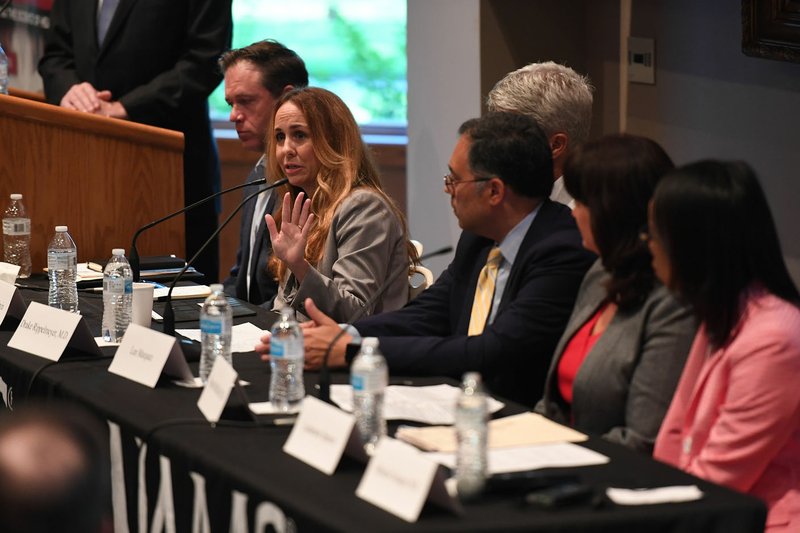 NWA Democrat-Gazette/J.T. WAMPLER Arkansas state Sen. Missy Irvin, R-Mountain View, speaks Monday during a panel discussion at the University of Arkansas for Medical Sciences' Schmieding Center for Senior Health and Education in Springdale to address the shortage of physician residency positions in Arkansas and how the The Resident Physician Shortage Reduction Act can help. Irvin is chairwoman of the senate public health and welfare committee.

SPRINGDALE -- Sen. John Boozman wants Congress to pay for more residency slots for medical school graduates to try and increase the number of doctors in Arkansas, he said Monday.

Federal law caps Medicare financial support for residency slots nationwide at the number a facility had in 1996. Boozman, R-Rogers, along with other senators, has co-sponsored the Resident Physician Shortage Reduction Act.

The act would increase the slots by 3,000 each year from 2021 to 2025. About 80,000 Medicare-funded residency slots exist nationwide, a spokesman for the American Association of Medical Colleges said.

"Graduate medical education is a huge issue. We lose a very high percentage -- probably 40% plus -- of our graduates from medical school going off and doing residencies someplace else," Boozman said Monday. The senator participated in a summit on graduate medical education at the University of Arkansas for Medical Sciences' Schmieding Center for Senior Health and Education.

The American Association of Medical Colleges predicts the United States will be short up to 121,900 physicians by 2032, said Len Marquez, senior director of government relations at the association, at Monday's event.

UAMS hosted the summit in light of a recent push to expand health care in Northwest Arkansas. A panel included a legislator and representatives of health care organizations and the Northwest Arkansas Council. The summit was held to discuss how to address the state's growing residency shortage, according to a news release.

The Northwest Arkansas Council, a nonprofit organization of executives from the region's largest companies, schools and health care systems, released a report in January estimating the region is missing out on $950 million a year in the health care economy.

Northwest Arkansas has more than the national average of doctors who specialize in family medicine and geriatrics, based on population. The region falls short in most specialty health care fields, including obstetrics/gynecology, internal medicine, hematology/oncology, cardio disease, endocrinology, neurology and psychiatry, according to the report released in January. The report included Benton, Washington and Madison counties.

The region needs more specialty care physicians to become a place where patients and their families travel for health care. They'll spend money at hotels, restaurants and elsewhere while they're in town, according to the report.

One-half of the residency positions created by the Resident Physician Shortage Reduction Act would be for specialty care physicians.

The council's report outlined four recommendations, including expanding graduate medical education, for how the region can attract and retain health care professionals and patients. The others were to establish a division of the council focused on health care transformation, develop an interdisciplinary research institute and develop a medical school.

"In some parts of the state, we are seeing hospitals facing closures as the populations shrink and the availability of medical care decreases as well. We all know that it's important to get medical care close to home," said Christopher Westfall, executive vice chancellor at UAMS.

Arkansas struggles to attract doctors in its rural and more populated regions, he said.

Doctors are likely to stay where they do their residencies. About 66% of people who complete medical school and residency in Arkansas stay and practice in Arkansas, Westfall said.

State Sen. Missy Irvin, R-Mountain View, described a lack of physicians as a workforce issue and said the state will need more doctors as the baby boomer generation ages. She added it's beneficial to the state's rural economies to have doctors because they earn more and will create jobs, such as in pharmacies.

"We've got to put money toward this. This is going to be something that is a priority for me in the next legislative session," she said.

Arkansas in the next two years is expected to graduate 439 medical students each year, but only 290 residency slots exist, meaning about 150 graduates will have to leave the state for their residencies, said Pearl McElfish, vice chancellor at UAMS Northwest.

Not only is losing those doctors a health care issue, but it's also a workforce and economic development issue because those graduates often have spent eight years total in undergrad and medical school in Arkansas only to leave and practice medicine elsewhere.