• Minnesota authorities charged singer R. Kelly on Monday with two counts of prostitution and solicitation involving a girl under 18 in 2001. Hennepin County Attorney Mike Freeman said Kelly, whose full name is Robert Sylvester Kelly, is accused of soliciting the girl after meeting her at a concert in Minneapolis. Kelly was not performing at the time, but was doing promotional work. Freeman said the girl was trying to get an autograph from Kelly, and that the R&B performer gave her his signature and a phone number. When the girl called the number, she was invited to Kelly's hotel. There she was offered $200 to take off her clothes and dance, Freeman said. He said Kelly took his clothes off and they danced together. The charges are felonies. Freeman said his office investigated after getting a tip from a Chicago tip line. "We felt we had more than enough to charge based on her testimony and corroboration from her brother," Freeman said. "I don't like buying sex from minors, and I don't think most other people do either." Kelly's attorney Steve Greenberg tweeted: "Give me a break. This is beyond absurd." The charges are the latest legal problem for Kelly, who remains jailed in New York after pleading innocent last week in federal court to charges that he sexually abused women and girls who attended his concerts there. He is accused of using his fame to recruit young women and girls into illegal sexual activity. Kelly, 52, is also charged separately in Chicago with engaging in child pornography.

• Valentina Sampaio has become the first openly transgender model hired by Victoria's Secret, nearly a year after a top company official was pressured to apologize for implying trans women are off brand. Sampaio, a Brazilian, has been posting from behind the scenes of a VS Pink campaign to the delight of celebrities who include Laverne Cox. Cox who is also transgender, posted on one of Sampaio's photos: "Wow finally!" Last November, marketing officer Ed Razek of parent company L Brands Inc., said in a Vogue interview that the annual Victoria's Secret angels TV special would never include "transsexuals" because "the show is a fantasy." He apologized after outrage ensued. Sampaio was not hired for the show, and the company is rethinking having one at all after ratings sagged last time around. 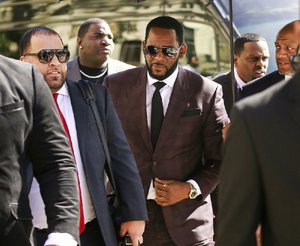 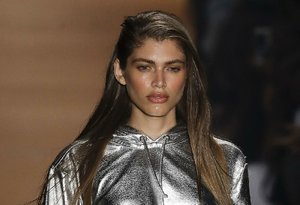