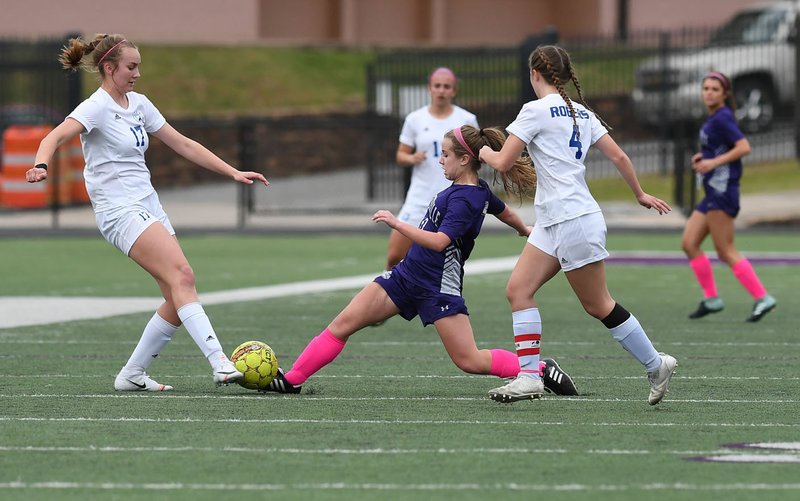 FAYETTEVILLE -- Grace Stahr did not have to wait long to redeem herself.

The Rogers High freshman forward scored the game-tying goal with six minutes left after she whiffed on a similar shot a few moments before that.

"It was funny because she said, 'Yeah, I know. I was so embarrassed,' but I told her, 'You made up for it,'" Rogers coach Aaron Crouch said. "She had that opportunity and was able to stick it against a very, very good keeper and a very good defense that had been playing well up until that point."

Stahr's goal sent the Mounties to a penalty kick shootout with Fayetteville (5-7-1, 5-4) for the second time this season after regulation ended 1-1. Rogers would go on to win 3-1 after keeper Mac Brace came up with two big saves for the Mounties.

Rogers (16-1, 9-0 6A-West) overcame a slow first half to stay perfect in conference play this year after Crouch made some adjustments that proved to be the difference in the game.

The Mounties lost one of their starting forwards for most of the first half after Leslie Barrales left about four minutes into the game with an apparent leg injury. Barrales' absence changed Crouch's game plan, and the Mounties had to readjust to the changes in personnel, which Crouch attributed to the slow start.

Those changes continued for Crouch as he kept subbing in fresh legs to keep Rogers' pressure up against Fayetteville's back line, looking for the equalizing goal before Stahr tied it.

Fayetteville coach Joe Thoma thought his team did not kill the Mounties' momentum consistently enough in the final minutes.

It was a tough loss for the Lady Bulldogs, which had two goals get called back in the first half after being called offside and played the No. 1 team in the conference tight for the whole game.

Thoma did not have an angle to see where his players were on both calls but said his team had other chances to score that could have won the game in regulation, he said.

The Bulldogs' shootout struggles continued with the team now dropping to 0-4 in games this season decided by penalty kicks. Fayetteville had two shots blocked and had another one sail over the top of the goal while Bentonville had little trouble converting its chances.

"That's really atypical for us. We're usually a team that takes those opportunities," Thoma said.

Senior midfielder Kamilla Sarvestani delivered Fayetteville's lone goal after she scored off a corner kick with about 15 minutes left in the first half. The shot curved into the top right corner off the net, just over the outstretched hands of Brace.

Cierra Flynn, Sydney Williams and Rachel Higgins each had a goal as West defeated Springdale at Jarrell Williams Bulldog Stadium.

The win moves West (8-6, 5-4) into a tie with Rogers Heritage and Fayetteville for third place in the league standings with five matches remaining.

The Lady Wolverines' scoring all took place in the second half.

Giselle Estrada scored the lone goal for Har-Ber in the first half, and Kanono made the goal stand up.

Ginger Olson recorded a hat trick and Angelina Diaz added two goals as Bentonville rolled to a victory over Van Buren at the Tiger Athletic Complex.

Jose Vega scored a first-half goal to give the Bulldogs the early lead. In the second half, Danny Malanado scored on a penalty kick, and Nelson Barroso found the back of the net on a free kick. Vega added his second goal of the match.