Daniel Vogelbach is in the Mariners clubhouse wearing a yellow shirt with the word "TANKS" stitched across his chest in red letters.

He doesn't know what it means. It was just a shirt that teammate Dee Gordon gave him, and Dee isn't around to explain.

But at that point, it would have been appropriate garb for anybody on the winningest team in baseball.

When the sun rose Monday morning, the Mariners were 13-5 in their supposed "step-back" season, having scored 126 runs while sporting a .526 slugging percentage -- first and second, respectively, in MLB. And the poster boy for such mashing has been Vogelbach, the 26-year-old who's been abusing baseballs like no one else in the sport has this season.

His slash line before taking the field Monday was .378/.478/1.243, the slugging percentage better than Angels star Mike Trout, who's the major-league leader among qualified players. Since Vogelbach had played in only 10 games, he was 11 plate appearances short of qualification. He still has managed to hit six home runs, which was tied for fourth in MLB.

In Saturday's 3-1 loss to Houston, he went 2 for 3 with two singles -- adding to a career stretch for the designated hitter who has spent most of his pro baseball days in the minor leagues waiting for a shot.

Through the first 10th of this season, though, he has been the top tank for a team plowing through everyone.

"It's awesome. There's certainly a track record of him hitting everywhere he's been in the minor-league system," Mariners Manager Scott Servais said. "Coming into the season, we wanted to give him an opportunity. He got an opportunity here eight or 10 days ago, he took it, ran with it and hasn't cooled off."

Vogelbach's most productive game this season came during a 12-5 win over the White Sox on April 7, when he hit two home runs and drove in six runs. His most heroic game came against the Royals on Thursday, when he hit a game-winning solo home run in the top of the 10th.

Entering Monday's game, the Orlando, Fla., native had two more dingers this year than in his three previous seasons, which consisted of 144 plate appearances. What's the saying again? Superhuman stretches come to those who wait.

With Nelson Cruz socking around 40 home runs every year, Vogelbach wasn't going to get a shot at being an everyday DH in Seattle. And despite his minor-league dominance (Vogelbach had 20 home runs in 84 games in Class AAA Tacoma last year), he rarely delivered in his scattered big-league call-ups.

Despite Seattle General Manager Jerry Dipoto's initial bullishness, Vogelbach struggled so badly in the spring of 2017 that he played just 16 major-league games. So he had to wonder if success in The Show was ever going to come.

"You're not always in control. It's not always on our time. It's actually never on our time," Vogebach said of having to wait for his chance. "Anytime you get an opportunity, that's all you can ask for. And not just in this game, but in life. What you do with that opportunity is up to you."

Like the Mariners, it's safe to say that Vogelbach will regress. How deep that regression will be is the more important question.

We do know that he changed his swing in April of last year, which led to the best hitting of his minor-league career. And after that abysmal spring two years ago, he said he has stopped putting such crippling pressure on himself.

"I'm not going to hit .400 all year," Vogelbach said. "I'm gonna learn from the bad games, learn from the good games. And just continue to find something I can get better at every day."

It's uncertain how often Vogelbach will be in the lineup this season. He can play first base as well as DH, but so can fellow Mariners Edwin Encarnacion and Jay Bruce. Vogelbach's used to that by now, though.

His plan is to wait for his opportunities, then pull his weight when he gets them. 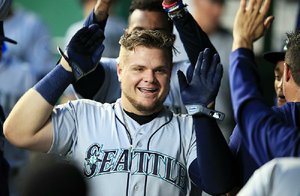