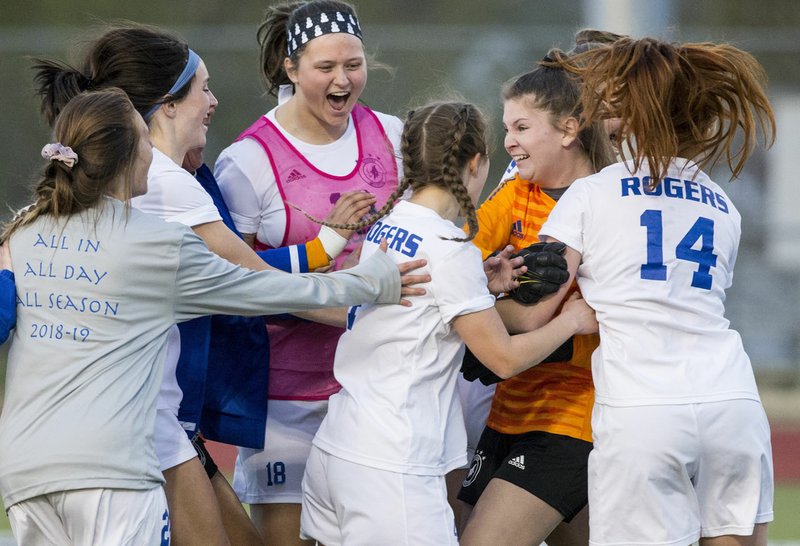 BENTONVILLE -- Mac Brace heard the sound of the soccer ball as it went past her hands and hit the crossbar, but she still hadn't realized what just transpired.

It didn't take her Rogers High teammates long to let her know, though.

It meant that Carrie Kotoucek's penalty-kick attempt had not gone into the goal, and the Lady Mounties had taken sole possession of first place in the 6A-West Conference standings Tuesday night with a 4-3 decision in penalty kicks at the Tiger Athletic Complex. 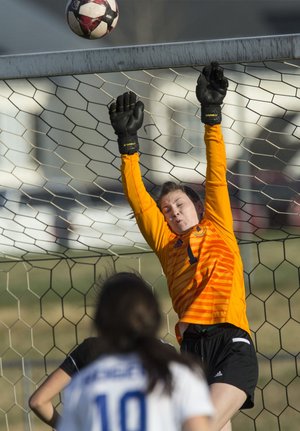 NWA Democrat-Gazette/BEN GOFF @NWABENGOFF Mac Brace, Rogers goalkeeper, deflects a Bentonville shot over the bar in the first half Tuesday, April 2, 2019, during the match at Bentonville's Tiger Athletic Complex.

"It was definite luck," Brace said. "She's a solid player, and I expected her to go to the bottom corner or the top corner. Thankfully, it hit the crossbar. I didn't know the game was over until I looked up and seen my teammates rushing onto the field. That's how I knew it was over."

After both teams remained scoreless throughout regulation, Brace gave Rogers (12-1, 5-0) the upper hand when she blocked Tyler Ann Reash's penalty-kick attempt after each team had scored to start the shootout. The Lady Mounties kept that advantage as Samantha Todd, Aly Todd and Ashlyn Robinson were successful on their kicks while Angelina Diaz and Megan Sattler scored for Bentonville (11-2, 4-1).

Rogers still had a kick remaining when Kotoucek stepped up to take her kick, but it didn't matter. Kotoucek's ball hit the left side of the crossbar and bounced away, giving the Lady Mounties their second straight shootout decision.

"We came into this match with a healthy respect for Bentonville," Rogers coach Aaron Crouch said. "We knew we were going to have to battle to get the win.

"We maybe had three or four shots, but if you look back, they didn't have that many either. With the exception of Mac Brace's four really, really good saves, it was pretty much a stale game. It wasn't super exciting; it was just really, really intense."

The closest scoring threat in regulation came when when a Bentonville free kick from about 40 yards out glanced off one of the officials and went to Sidney Wagner inside the box. Brace, however, recovered in time to deny the shot and keep the match scoreless.

Pam Seiler had two goals and an assist to help the Lady War Eagles earn the 6A-West Conference win.

Lanee Knight scored off a Seiler assist, and Seiler's third goal came off a Ruth Duran assist for Heritage.

Bentonville converted all of its penalty-kick attempts, while Evan Shanks provided the needed block as the Tigers edged Rogers.

Shanks denied Fransisco Jimenez of a score on Rogers' second penalty-kick attempt. The Tigers (7-2, 4-1) made it count as Rodrigo Mouron, Johnny Merlos, Ryan Fox, Andrew Wagner and Bryce Mills are were successful on their shootout attempts, while Trey Keith, Esteban Chavez and Brayan Flores scored for Rogers (5-4-2, 2-3).

The teams battled to a 2-2 halftime deadlock as Jimenez and Saldiema provided Rogers' goals, while Thomas Borenholtz and Mouron scored for Bentonville. Mouron scored again with 36:47 remaining to give the Tigers a 3-2 lead, only to have Chavez tie it 2 minutes later.