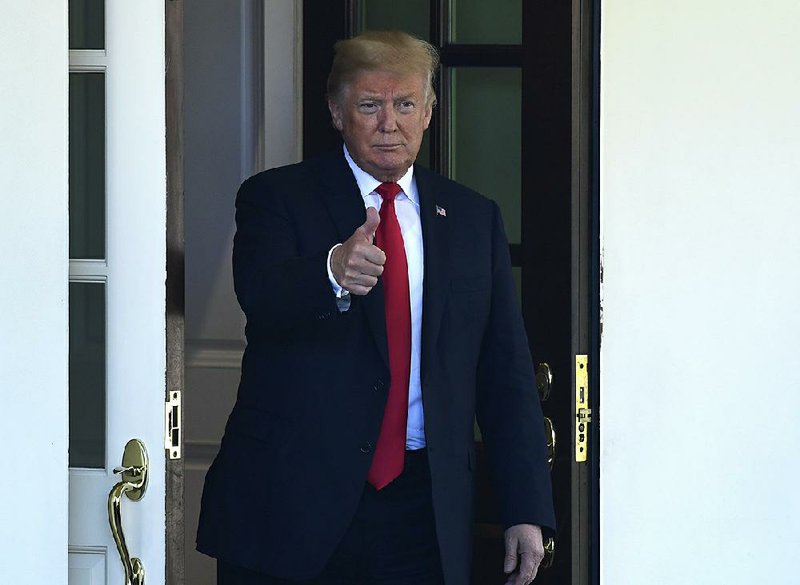 WASHINGTON -- President Donald Trump on Friday signed an $854 billion spending bill into law that averts a government shutdown and increases next year's funding for the military and health and education programs.

The measure requires lawmakers to revisit other contentious measures in just two months, including whether to devote billions of dollars toward the construction of a wall along the Mexico border.

The new law avoids a partial government shutdown because it extends money for the Pentagon, health and education programs through Sept. 30, 2019, and a number of other programs through Dec. 7.

Funding for all of those programs was scheduled to expire at midnight Sunday.

The House and Senate approved the spending plan earlier this week.

Trump said in a statement the legislation would "rebuild our military, protect our communities, and deliver a better future for all Americans."

This spending package reflects the compromise GOP leaders sought with the White House that postpones a fight over Trump's demand for a border wall until after the Nov. 6 midterm elections.

The law sets the new Pentagon budget for 2019 at $606.5 billion, a $17 billion increase and a priority for the White House and Republicans.

And funding for the Department of Health and Human Services, as well as the Labor and Education departments, would grow to $178 billion, a $1 billion increase and $11 billion more than the White House originally requested. This was a priority of Democrats.

Because Republicans only narrowly control the Senate, they need support from Democrats to pass spending bills.

The legislation marks the continuance of a steep increase in funding since Trump took office, a sharp departure from GOP demands during President Barack Obama's administration to cut spending. White House officials have said they want to reduce spending but have little leverage because Democrats can block changes in the Senate.

The government is projected to spend close to $4.5 trillion next year, according to the Congressional Budget Office, but less than half of that will be approved by Congress. The rest is automatically disbursed through programs like Social Security, Medicare and Medicaid.

For months, Trump has demanded billions of dollars from Congress for the construction of a wall along the Mexico border, and he wanted that funding to be included in the new spending package. But GOP leaders believed this would prove to be too divisive ahead of the midterm elections and persuaded Trump to postpone the debate over those funds until after Americans vote.

Before he agreed to postpone the issue, Trump had been threatening a government shutdown to try to force Republicans' hands.

"I want to know, where is the money for Border Security and the WALL in this ridiculous Spending Bill, and where will it come from after the Midterms?" Trump tweeted last week, saying Republicans "MUST FINALLY GET TOUGH!" against Democrats who he said are obstructing law enforcement and border security.

GOP leaders had warned Trump that a shutdown could be deeply damaging to Republicans in the midterms.

Trump, though, has said he is expecting Republicans to secure this funding after the election, and GOP leaders have not signaled how they plan to do this. Most Democrats -- and some Republicans -- have expressed opposition to the creation of a wall along the Mexico border. Some White House officials have sought as much as $5 billion for the construction this year, though the final price tag would likely be much higher.

During the 2016 presidential campaign, Trump described the wall as one of his top campaign promises, saying it would keep out drugs and migrants. He also vowed Mexico would finance the wall's construction, something the Mexican government has repeatedly refused to do.

The House of Representatives, where Republicans control a large majority, has sought to devote $5 billion toward construction of the wall, but Senate lawmakers have only agreed to direct $1.6 billion toward border security.

Trump in his statement applauded the $1.6 billion the bill includes for wall funding but also blamed Democrats for failing to agree to more.

"Unfortunately, the radical Democrats refuse to support border security and want drugs and crime to pour into our country," he said.

In an interview with Hill.TV, Trump said his recent visit to the 9/11 memorial in Pennsylvania to commemorate Flight 93 had renewed his resolve to build the wall, and alluded to potential immigration action that he said he planned to take in the coming week.

Even though lawmakers have pushed off decisions about the border wall and some other programs until December, they made more progress than usual in a range of areas. Trump has already signed into law a bill that appropriated money for military construction, energy and water programs, as well as funding for the legislative branch for one year.

The spending bills that will need to be revisited by Dec. 7 pertain to agriculture, housing, homeland security and foreign aid, among other things. But it's the decision over the border wall that is projected to dominate the debate.

Information for this article was contributed by Damian Paletta and Erica Werner of The Washington Post; and by Jill Colvin, Catherine Lucey, Matthew Daly and Ken Thomas of The Associated Press.