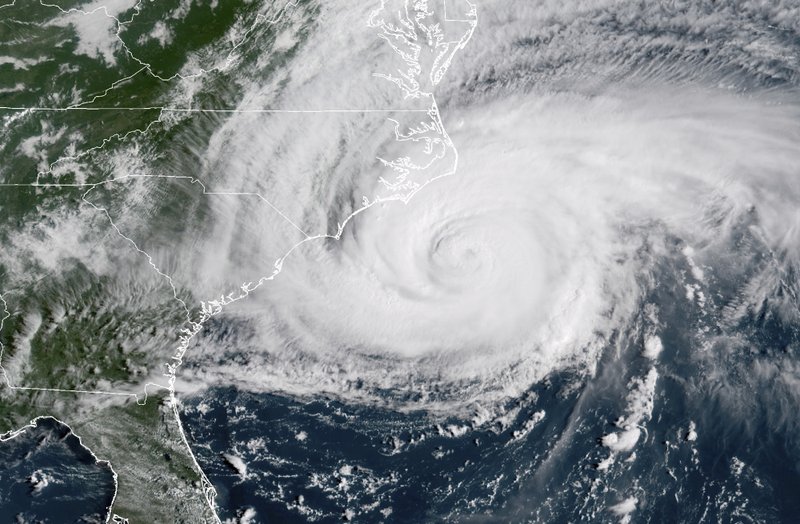 This satellite image provided by NOAA shows Hurricane Florence on the eastern coast of the United States on Friday, Sept. 14, 2018. (NOAA via AP)

MIAMI -- It's about the water, not the wind, with Hurricane Florence making an extended stay along the North Carolina coast. Forecasters say "it cannot be emphasized enough that the most serious hazard associated with slow-moving Florence is extremely heavy rainfall, which will cause disastrous flooding that will be spreading inland." Top sustained winds made it just a Category 1 hurricane but some communities were already submerged in more than 6 feet (2 meters) of water as the storm drenched the coast.

--Heavy rains: Up to 18 trillion gallons falling on seven states over seven days, as much water as there is the entire Chesapeake Bay

--So far: roughly 15 inches (38 centimeters) of rain already has fallen north of Swansboro, North Carolina, and it's only going to get worse

--Storm surge: up to 13 feet (nearly 4 meters), and seawaters could push inland 2 miles (more than 3 kilometers), depending on how long Florence lingers

--Intensity: Florence came ashore with top winds of 90 mph (145 kph), below the 111 mph (178 kph) threshold for a "major" hurricane but still extremely dangerous

--In the dark: more than 645,000 outages, mostly in North Carolina, as of Friday morning, with Duke Energy anticipating 1 million to 3 million homes and businesses losing power

Images captured by Associated Press journalists show last-minute preparations to secure homes and businesses and families settling into storm shelters as rain and storm surge began to soak the Carolinas.

A massive evacuation is underway in the Philippines, which is being threatened by Typhoon Mangkhut ; the super typhoon's winds are equivalent to a Category 5 Atlantic hurricane. Elsewhere in the Atlantic Ocean, the Azores could get gusty winds and heavy rains from Tropical Storm Helene this weekend, while Isaac was a tropical depression and weakening in the Caribbean Sea.

If Florence doesn't wipe out oceanfront homes perched on stilts along the Carolinas coast, rising sea levels will . Florence is hitting low-lying barrier islands that experience some of the fastest rates of sea level rise observed anywhere in the world, nearly an inch (2.5 centimeters) a year.

George Washington University researchers are standing by their study that found the death toll following Hurricane Maria in Puerto Rico was 2,975, considerably higher than first thought. President Donald Trump rejected that conclusion Thursday, arguing without evidence that the number was wrong and falsely called it a plot by Democrats to make him "look as bad as possible." Top Republicans in Florida, where thousands of Puerto Ricans relocated after Maria, quickly said Trump was wrong about the death toll.

The city of New Bern, North Carolina , reported over 1,200 911 calls in a 12-hour span, and roughly 4,300 residences and 300 commercial buildings have been damaged. That count is expected to rise significantly.

"WE ARE COMING TO GET YOU" -- that's what the city of New Bern, North Carolina, tweeted after hundreds of people needed rescue from rising waters from the Neuse River. More than 60 people in Jacksonville, North Carolina, had to be moved to safety from a cinderblock motel that began to crumble in the hurricane.

UP CLOSE AND PERSONAL

A North Carolina TV station had to evacuate its newsroom in the middle of its hurricane coverage. Hours before Florence made landfall, workers at WCTI-TV NewsChannel 12 abandoned their studio in New Bern, North Carolina, where the National Weather Service measured storm surge 10 feet (3 meters) deep.

The mayor of Hurricane, West Virginia, stepped in to rescue a wedding on North Carolina's Outer Banks from an uninvited guest: Florence. As the storm threatened to wash away months of planning , Mayor Scott Edwards offered a unique opportunity to use his city hall for the ceremony. Marsha Bradbury and Jon Gillenwater plan to be wed "in Hurricane during the hurricane" on Sunday.

Mercedes O'Neill was worried about riding out the hurricane in her North Myrtle Beach home. But she's even more worried about what would happen if she couldn't quickly get back to work at a Family Dollar store after the storm passes. O'Neill's family lives paycheck to paycheck, and evacuating isn't cheap .

About 1,600 animals at the North Carolina Zoo are hunkered down. Zoo workers moved elephants, giraffes, chimpanzees and hundreds of other species indoors for safety. Some animals, including bison and elk, stayed in fenced-in yards instead of barns because they don't like being in fully enclosed spaces.

THE POWER OF WATER

Scientists can't say -- yet -- that climate change helped make Florence worse. But previous research has shown that the strongest hurricanes are getting wetter, more intense and intensifying faster due to human-caused warming. Sea level rise also adds to storm surge damage : When Hurricane Sandy hit in 2012, a study found sea-level rise over the 20th century caused more than $2 billion in additional damage in New York City due to the "extra" storm surge it generated.

Hurricanes usually drive people away from Florida, but Florence is making the Sunshine State into a refuge for people from the Carolinas. Cruise ships have diverted to Florida away from the storm's path, and some hotels are offering special discounts for evacuees. What could be better than riding out a hurricane at Walt Disney World?