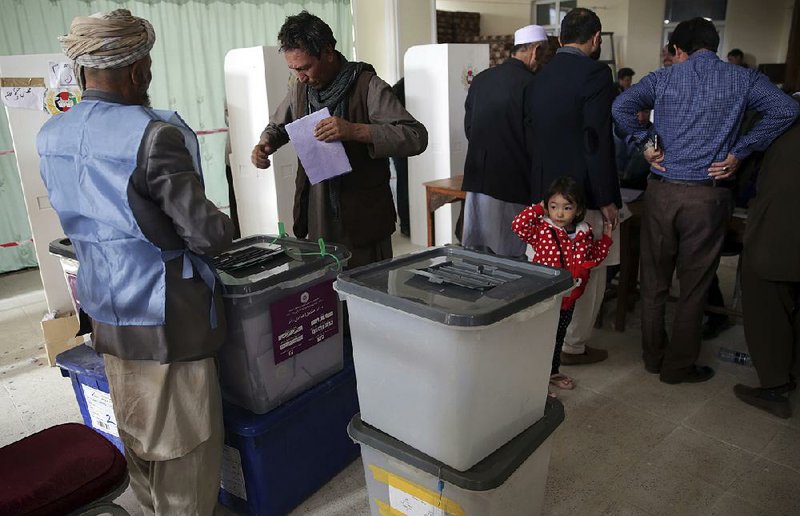 A man prepares to cast his vote during the second day of parliamentary elections in Kabul, Afghan- istan, on Sunday.

KABUL, Afghanistan -- Afghanistan's second day of parliamentary elections marred by violence and delays caused by technical issues came to a close as a roadside bomb on Sunday brought the death toll over the past two days to more than 50, including several children.

Independent Elections Commission Chairman Abdul Badi Sayat congratulated voters for turning out, saying that about 4 million people out of the 8.8 million registered voters cast their ballots over the past two days at 4,576 polling centers across the country.

"Afghans did not only show their enemies that they would not surrender to any threats or warnings, but that they also have the power and will to defeat their enemies," Ghani said, referring to threats by the Taliban and an affiliate of the Islamic State extremist group warning voters against casting ballots.

The first parliamentary elections since 2010 are being held against a backdrop of near-daily attacks by the Taliban, who have seized nearly half the country and have repeatedly refused offers to negotiate with the Kabul government.

The Taliban had vowed to attack the election, and on the first day of polling at least 36 people were killed in nearly 200 attacks, including 27 civilians, according to Deputy Interior Minister Akhtar Mohammed Ibrahimi. He said security forces killed 31 insurgents in gunbattles.

On Sunday, a roadside bomb in the eastern Nangarhar province struck a vehicle filled with civilians, killing 11 people, including six children, according to Attahullah Khogyani, spokesman for the provincial governor.

No one immediately claimed the attack. The Taliban and an Islamic State affiliate are both active in Nangarhar.

In the northern Balkh province, insurgents shot and killed four men who were on their way to a polling station late Saturday, said Sher Jan Durani, spokesman for the provincial police chief.

Durani says the men were carrying their national IDs with stickers proving they had registered to vote. He blamed the attack on the Taliban, who have warned people not to participate in the election.

Among those present during the attack was Army Gen. Austin "Scott" Miller, the top U.S. officer in Afghanistan. The Taliban claimed the attack and said Miller was among the main targets.

Smiley has served in the Army for just over 30 years and became a general in May 2017, according to an official biography. He deployed in Afghanistan this summer, taking command of a unit with headquarters in Kandahar known as Train, Advise, Assist and Command-South.

The attack prompted the Afghan government to postpone voting in Kandahar for parliamentary elections by a week.

Information for this article was contributed by Rahim Faiez of The Associated Press and by Dan Lamothe of The Washington Post.