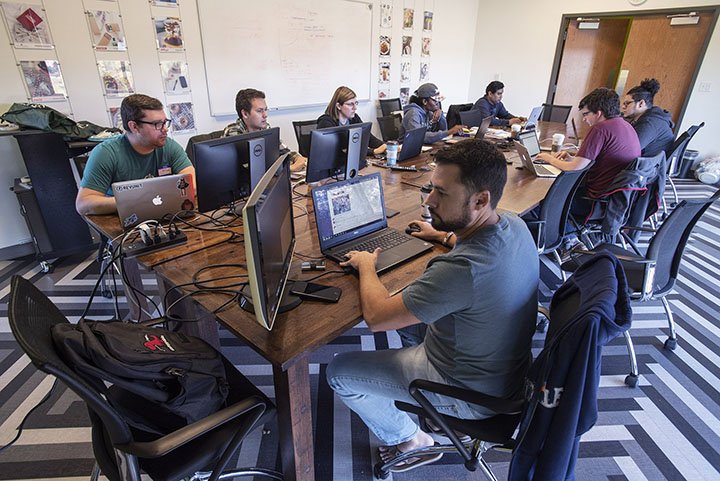 ROGERS -- Betsy Brumley had an idea of what she wanted to get out of GiveCamp NWA. That all changed once she met the volunteer team she and her husband would work with over the weekend.

The nonprofit groups involved in GiveCamp NWA this weekend are:

More than 50 volunteers split into teams to help 11 nonprofit groups, including Brumley's I'll Fly Away Foundation. The event will conclude today.

On Saturday, the teams and nonprofit members found areas in the open, airy space at Collective Bias and got to work. Brumley's team met in a small conference where a new website was fashioned.

"I came in thinking one thing, and came out thinking another," Brumley said. "We're starting from the ground up building a new website."

Her team also talked with her about the message of the nonprofit group. A blog also was discussed. Brumley's grandfather Albert E. Brumley wrote the iconic song I'll Fly Away. The volunteers agreed Brumley has a story to tell and that it could be handled via blog posts.

Brumley's husband maintained the old website, and will learn how to manage the new one with the help of the volunteers.

Input from the nonprofit groups is vital over the course of the weekend, lead organizer Chris Whittle said.

"They are a part of the team," said Whittle, a software engineer and board president of GiveCamp NWA. "They are here to learn and see what changes are made."

Most of the nonprofit groups wanted help with websites. A few needed database assistance, and one sought help with a rebranding effort that will go live next year. Presentations of what the teams accomplished over the weekend will be presented today at Collective Bias.

Building a new website could cost between $2,000 and $5,000, Whittle said. The nonprofit groups get the work done for free, saving cash for other needs, he said. In 2017, GiveCamp NWA provided $100,000 in free help to nonprofit groups, according to a news release.

The biggest hurdle is the work has to be mostly completed over the weekend. Other developers, depending on their work load, might work six weeks or more to get a website ready for a client, Whittle said.

The Brumley team's day was spent working on getting the website home page and perhaps one interior page built. Betsy Brumley and Kevin Bernier watched a tutorial or Divi -- a visual page builder. They then would try replicate the two pages done by the volunteers.

Brumley was excited as a long day of work Saturday got started.

"It's life changing," she said of GiveCamp NWA. "I've met these three people less than 24 hours ago, and they are like family."