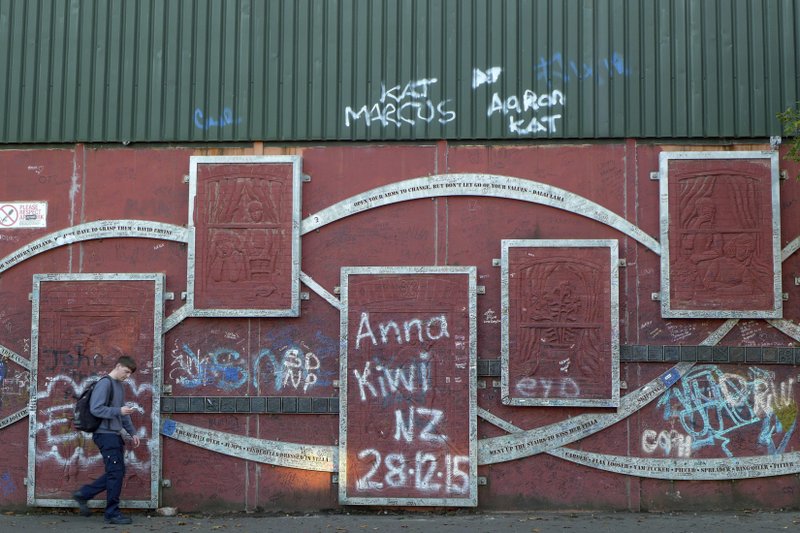 In this photo taken on Wednesday, Oct. 10, 2018, a man walk past a section of one of the Northern Ireland &quot;peace walls&quot; in Cupar Way, Belfast, Ireland. The land around the small town of Carrickcarnan, Ireland is the kind of place where Britain&#x2019;s plan to leave the European Union walks right into a wall - an invisible one that is proving insanely difficult to overcome. Somehow, a border of sorts will have to be drawn between Northern Ireland, which is part of the United Kingdom, and EU member country Ireland to allow customs control over goods, produce and livestock once the U.K. has left the bloc. (AP Photo/Lorne Cook)

BRUSSELS -- A flurry of talks between Britain and the European Union ended Sunday without an exit agreement, leaving the two sides three days to close a gap in their positions before a make-or-break summit.

An unscheduled, face-to-face meeting between EU negotiator Michel Barnier and British exit Secretary Dominic Raab, and a hastily scheduled meeting of 27 EU ambassadors in Brussels, had sparked speculation that the long-awaited deal was imminent.

Barnier dashed those hopes Sunday evening, writing on Twitter: "Despite intense efforts, some key issues are still open" in the divorce talks. The key stumbling block remains the need "to avoid a hard border" between Ireland and the U.K's Northern Ireland after the U.K. leaves the bloc, he said.

The lack of advancement on the border issue increased the chances that the negotiations will fail to produce an agreement spelling out how the EU will interact with its former member and vice versa. EU officials have warned that real progress was needed before the summit starting Wednesday.

The British government said there were still "unresolved issues" but it remained committed to making progress at the summit.

An EU official said no further negotiations were planned before the leaders of EU countries convene in Brussels. Both sides previously agreed that a special November meeting would be the deadline for reaching an agreement, since Britain is set to leave the EU on March 29.

The EU and the U.K. are seeking an elusive compromise position on the difficult Irish border question ahead of the summit. The "Irish backstop" is the main hurdle to a deal that spells out the terms of Britain's departure from the EU and future relationship with the bloc.

After Britain's exit, the currently invisible frontier between Northern Ireland and Ireland will be the U.K.'s only land border with an EU nation. Britain and the EU agree there must be no customs checks or other infrastructure on the border, but do not agree on how that can be accomplished.

Raab was not expected in Brussels on Sunday, but he made a last-minute trip for an in-person meeting with Barnier.

"With several big issues still to resolve, including the Northern Ireland backstop, it was jointly agreed that face-to-face talks were necessary," Raab's office said.

The EU's "backstop" solution -- to keep Northern Ireland in a customs union with the bloc -- has been rejected by Britain because it would require checks between Northern Ireland and the rest of the U.K.

The alternative -- to keep the entire U.K. in a customs union until a permanent solution can be found -- has angered pro-exit members of Prime Minister Theresa May's government, who claim that approach would limit the country's ability to strike new trade deals around the world.

The idea is also anathema to the Democratic Unionist Party, a Northern Ireland Protestant party that props up May's minority government.

So even if May strikes a deal with Brussels, she will struggle to get it past her government and Parliament at home.

Raab's predecessor, David Davis, wrote in the Sunday Times that May's plan for some continued ties with the EU even after Britain leaves the bloc is "completely unacceptable" and must be stopped by her ministers.

May is struggling to build a consensus behind her exit plans ahead of a Cabinet meeting Tuesday that will be followed by Wednesday's EU summit. If Davis' call for a rebellion is effective, the Cabinet meeting is likely to be fractious.

Davis and former Foreign Secretary Boris Johnson resigned from May's Cabinet this summer to protest her exit blueprint. While all three are in the ruling Conservative Party, the two men have become vocal opponents of May's plan, saying it would betray the exit vote and leave Britain in a weakened position.

Democratic Unionist leader Arlene Foster remains opposed to any exit plan that would require checks on goods traveling between Northern Ireland and Britain, as some EU leaders have suggested as part of a backstop.

May's exit plan has also been questioned by some senior figures in the opposition Labor Party, further dimming the prime minister's hopes of winning parliamentary backing for any exit deal she reaches with EU officials.