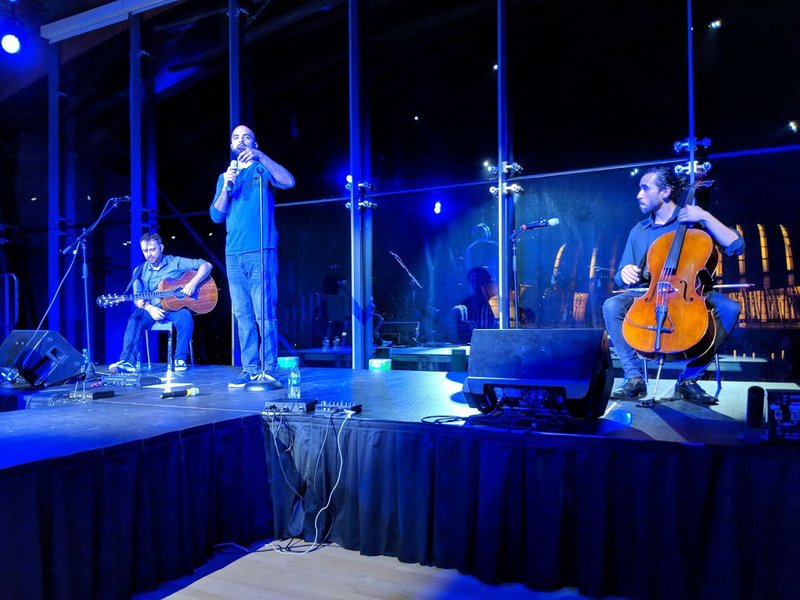 When you get approval to use a confetti cannon for an event at Crystal Bridges, you really should take full advantage of it. Raj Suresh certainly did at his collaborative show with local duo Rozenbridge on Sept. 27. In an interview with What's Up! ahead of the performance, the stand-up comedian quipped that the green light for use of the confetti cannon was the only reason he chose the art museum as the host venue for his unique performance. And I have to admit, the cannons did give the show a special sort of something.

The show, "Maya: Raj and Rozenbridge," was presented by the museum's Artinfusion programming and, after a brief set by local comedian Trey Moore, began with the half-guitar, half-cello duo playing as they walked from the back of the Great Hall to the stage. Suresh welcomed the crowd by joking about the venue being far too classy to be hosting this show, but the full room -- standing room only -- likely disagreed.

FYI — Raj and Rozenbridge will return to the stage soon. Keep an eye on the performers’ website for info.

When I spoke with Suresh ahead of the show, we talked a lot about what exactly the show is. And even after seeing it, I can't easily put it into a tidy little definition box. There was stand-up comedy, there was lots of crowd interaction, there was music, there was storytelling, there was interplay between the musicians and Suresh, there was even a moment where Suresh (who is online-certified to officiate weddings) teased that he wanted to officiate a wedding during the show. Alas, no engaged couples responded to his Facebook offer ahead of the show, but one couple did express interest in renewing their wedding vows. Suresh pulled the two from the crowd onto the stage, and what started as a sweet moment took a turn for the weird when Suresh passed the bottle of wine he was drinking to the couple and had each take a sip following their renewal. Sure, it was a little bizarre, but in a "I have no idea what's going to happen next in this show" kind of way.

The pacing of the show was consistent throughout, making it equally about both the comedy and the music. Suresh would tell some jokes, mostly in story-format, and he would interact with the crowd -- not missing a beat. Then Rozenbridge would take over and hash out a few songs. I've seen the duo's name as they perform all the time in the area, but I hadn't yet seen them perform. "Maya" was a delightful way to get to know the band as they are absolutely captivating, but also have wonderful comedic timing. My favorite moments were when the band and Suresh were performing together. Suresh would be telling a story and Christian Serrano-Torres on cello would pluck a few strings for a sound effect here or there, or Tim Warden on acoustic guitar would pick a melody to enhance Suresh's narrative. Even though I knew the trio had put dozens of hours of rehearsal into the flow of the show, the interactions felt completely spontaneous and Suresh's seemingly genuine reactions to them sold it even more.

"Maya" ended with a beautiful moment as Suresh circled back around to a tale he'd been sharing early in the show -- a tale of a man whose family was swept away in a flood and who drowned trying to rescue them. Pretty heavy for a comedy show. But that's the thing -- "Maya" isn't just a comedy show. Between the heart and emotion of Rozenbridge's melodies and Suresh's moments of thoughtful contemplation on the human spirit, "Maya" pulled the audience through the spectrum of emotions. Because in the first half, Suresh's storytelling swelled to a dramatic climax and gave way to Rozenbridge's playing, most of us had forgotten the tale started early in the show. As Suresh returned to the narrative, he invited Warden's daughter to the stage to play an original tune of hers as he shared the resolution of the story. It was a moving display and, because it was followed by a full-on party -- as the confetti cannons went off again, the audience got to their feet and Rozenbridge rocked out with a few more songs -- it was a rollercoaster of an ending and joyful success for the comedian's first collaborative show.