Boone, Stanton both folded in October

And suddenly everyone was reminded why those two moves were considered risks in the first place. When the stakes got higher, Boone and Stanton were at their worst, turning into the Yankees' two greatest liabilities, against the Red Sox, in the playoffs. That's not a sentence anyone in pinstripes wants on their resumes, but they're now stained by this first-round exit, made all the more unsightly when put in contrast with Boston's own winter countermeasures, Alex Cora and J.D. Martinez.

In Boone's case, the Yankees rolled the dice on a former October hero, plucking him from the broadcast booth, in the belief that his philosophies synced up perfectly with those of Cashman's front office. Boone, in a sense, fit the suit, and there was nary a glitch as the Yankees persevered through numerous injuries to earn the wild-card berth.

We're not sure why it all went sideways in the division series, as Boone's bullpen management in the last two games, both Bronx losses, seemed to veer off script. He used Lance Lynn in a combustible, high-leverage spot that lit the fuse on Monday's 16-1 explosion in Game 3. The next night, facing elimination, Boone again was slow to get the bullpen cranked up, allowing CC Sabathia to put the Yankees in a 3-0 hole before the manager deployed his relievers.

Did Boone freeze up in those pressure spots? Or was he just following the organizational blueprint, right down to the punctuation marks? In Game 3, pushing Luis Severino into the fourth inning was ill-advised, and the bullpen moves (Lynn first, then Chad Green) poured gasoline on the fire. Boone was able to stop the bleeding in Game 4, but with runs such a precious commodity, the Yankees spent the entire night chasing an early 4-0 deficit before falling one run short.

Boone called it a "sound decision" to let Sabathia try to plow through a five-righty minefield before reaching the relatively safe footing of the lefty No. 8 hitter, Jackie Bradley Jr. The result? Three hits, a sacrifice fly, and three runs. Sabathia did, however, retire JBJ on a groundout to first base.

Those decisions are going to stick with Boone through a long winter, just as Stanton's handful of non-competitive at-bats, in pivotal moments, are glued to him. The Yankees thought they were creating their own 21st century Bash Brothers in trading for Stanton to pair with Aaron Judge, but only Judge showed up in any meaningful way for the postseason.

Stanton homered in the wild-card game, with the Yankees already in front 6-2 in the eighth. But when they needed a timely hit, such as in Friday's 5-4 loss in Game 1, he stranded five, including a brutal whiff with the bases loaded and none out in the seventh. Stanton had four Ks that night, the start of a .222 (4-for-18) division series that featured four singles, two of them coming in a 16-1 rout. The lingering sequence, however, will be of Stanton striking out against a wobbly Craig Kimbrel during the Yankees' two-run rally in the ninth inning of Game 4.

Kimbrel already had walked Judge on four pitches leading off, and Didi Gregorius followed with a sharp single to right field. Up came Stanton, who looked at a first-pitch strike but didn't get another pitch anywhere close to the zone and whiffed anyway, swinging wildly at a slider that was headed for the Yankees' on-deck circle.

A rival talent evaluator who had watched Stanton said he had become overly prone to "bailing and chasing" without pitchers even bothering to press him inside anymore. "He didn't show he could adjust," the evaluator said. "It looked like Boston's pitchers executed really well."

This was Stanton's first playoff appearance, so maybe dealing with the pressure is just another adjustment for him to make. He was welcomed to the Bronx by getting booed on Opening Day, so this was an unusual year for the reigning NL MVP -- and a humbling finish.

"We just have to look to what we can build on from the season," Stanton said, "and use it as fuel for next year."

Whatever needs to be done. Because both Boone and Stanton have plenty to prove. 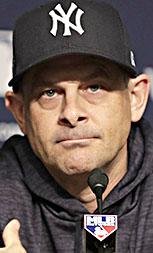 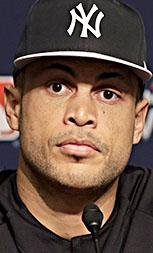