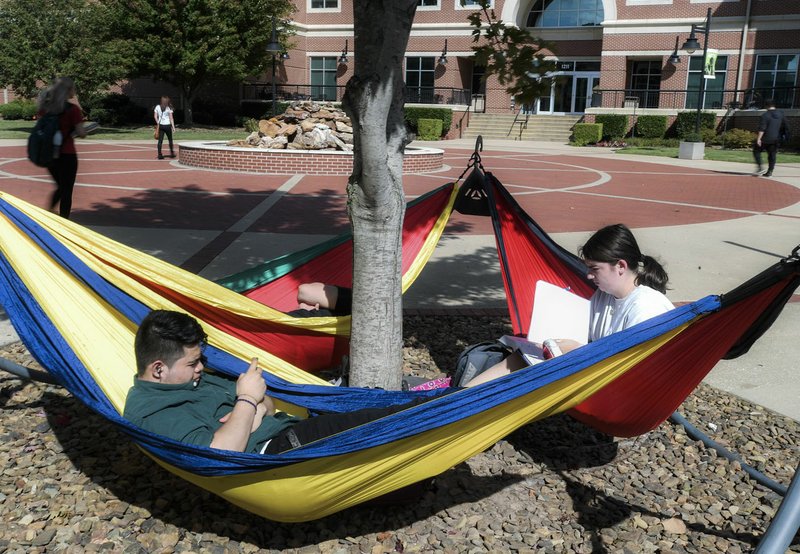 NWA Democrat-Gazette/CHARLIE KAIJO Luis Duran of Springdale and Elisabeth Sugg of Springdale (from left) relax on hammocks between their classes Monday at the Northwest Arkansas Community College in Rogers.

Evelyn Jorgenson, college president, gave an update of the college's fall semester enrollment at the Board of Trustees meeting.

A graphic of the state's community colleges' enrollments showed Northwest Arkansas Community College towering over the others with 7,995 students. The second highest was University of Arkansas -- Pulaski Technical College with 5,451 students.

"We're not ready to call it a complete trend," she said of the college's growth. "It's a good start. It's where we want to be right now."

There were a couple of other community colleges in the state who saw small increases, less than 1 percent, said Ricky Thompkins, vice president of learning, but the majority saw a decrease in enrollment.

"Nationally, it's down as well," he said. "We're bucking the trend, which is a huge testament to faculty and staff."

Two areas of growth for the college have been the Early College Experience -- where high school students take college courses while still in high school -- and a more concerted effort on recruiting high school graduates prior to them attending a university, said Todd Kitchen, vice president for student services.

The college hired Justin White as the director for enrollment management last year, which made an impact, officials said.

Joe Spivey, board chairman, said it was a board directive that the college put more focus on recruiting students straight out of high school.

"Compliments to your staff, Dr. Kitchen, for getting that accomplished," he said.

Jorgenson also reported that the college received two federal grants from the Department of Education.

One is for $84,000 each year over four years to assist students with child care costs while they attend school. It's a partnership between the college and Helen Walton Children's Enrichment Center.

Child care cost can be a barrier for some to seek a higher education, Jorgenson said. This grant will help remove that barrier.

The second is a Title III grant for $450,000 per year for five years. It is to strengthen the college's capacity to serve students through career development education programs, Jorgenson said. There will be an emphasis on replicating programs it currently has at its Bentonville campus to the Washington County Center.

Board members also agreed for college officials to seek a project director for the Title III grant.

It was one of the 80 provisional positions the board approved during the budget planning season earlier this year, said Debi Buckley, vice president of administration.