Trump says he's not happy with chairman of Fed

President suggests meeting with Putin at G-20 up in air by Philip Rucker, Josh Dawsey and Damian Paletta The Washington Post | November 28, 2018 at 3:37 a.m. 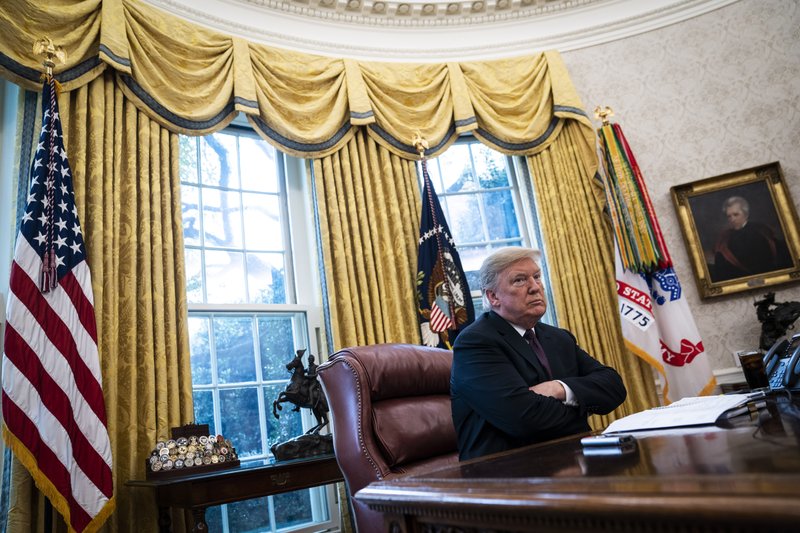 President Donald Trump sits at his desk in the Oval Office during an interview Tuesday with The Washington Post.

WASHINGTON -- President Donald Trump on Tuesday said he is "not even a little bit happy" with his choice to lead the Federal Reserve, blaming the central bank for recent stock market declines and this week's General Motors plant closures and layoffs.

In an interview with The Washington Post, Trump complained at length about Federal Reserve Chairman Jerome Powell, whom he nominated last year.

"I'm doing deals, and I'm not being accommodated by the Fed," Trump said. "They're making a mistake because I have a gut, and my gut tells me more sometimes than anybody else's brain can ever tell me."

The Federal Reserve is the nation's central bank and sets the direction for interest rates, or the cost of borrowing money.

The United States has had very low interest rates for more than a decade, and Fed officials are slowly trying to raise them. Many economists believe that higher interest rates are a way to combat inflation and prevent the economy from overheating.

Powell took over as chairman earlier this year. Since then, the Fed has raised interest rates three times and is expected to increase them another time next month.

Trump on Tuesday reiterated his complaint that the Fed had set interest rates at effectively zero beginning in December 2008, just weeks before President Barack Obama took office. The move came in response to the recession that began in late 2007.

"I'm not playing by the same rules as Obama," Trump said. "Obama had zero interest to worry about; we're paying interest, a lot of interest. ... And just so you understand, I'm playing a normalization economy, whereas he's playing a free economy. It's easy to make money when you're paying no interest. It's easy to make money when you're not doing any pay-downs. Despite that, the numbers we have are phenomenal numbers."

Brad DeLong, an economics professor at the University of California at Berkeley, said the Fed was responding in part to economic conditions Trump had helped foster, such as growth spurred by last year's tax cut.

"The Federal Reserve cannot be expected to do otherwise than raise interest rates," DeLong said. "This is what Trump bought when he made his Fed appointments. So why is he surprised?"

Trump on Tuesday also threatened to cancel his scheduled meeting with Russian President Vladimir Putin at the Group of 20 forum this week in Argentina because of Russia's maritime clash with Ukraine.

Asked whether he thought Putin was within his rights to capture three Ukrainian ships and their crews Sunday in the Black Sea, Trump said he was awaiting a "full report" from his national security team Tuesday evening about the incident.

When asked whether Russia's actions are a cause for concern for the American people, Trump said: "I don't like that aggression. I don't want that aggression at all.

Trump on Tuesday also dismissed the federal government's report released last week suggesting that damage from global warming is intensifying around the country.

"And when you're talking about an atmosphere, oceans are very small. And it blows over and it sails over. I mean, we take thousands of tons of garbage off our beaches all the time that comes over from Asia. It just flows right down the Pacific, it flows, and we say 'where does this come from?' And it takes many people to start off with."

The president added of climate change, "As to whether or not it's man-made and whether or not the effects that you're talking about are there, I don't see it."

"Maybe he did and maybe he didn't," Trump said. "But he denies it. And people around him deny it. And the CIA did not say affirmatively he did it, either, by the way. I'm not saying that they're saying he didn't do it, but they didn't say it affirmatively."

Trump also considered withdrawing U.S. troops from the Middle East, although he noted that Israel is one reason to keep them there.

"Oil is becoming less and less of a reason because we're producing more oil now than we've ever produced," he said. "So, you know, all of a sudden it gets to a point where you don't have to stay there."

Information for this article was contributed by Brady Dennis, Anne Gearan, Shane Harris and Damian Paletta of The Washington Post.