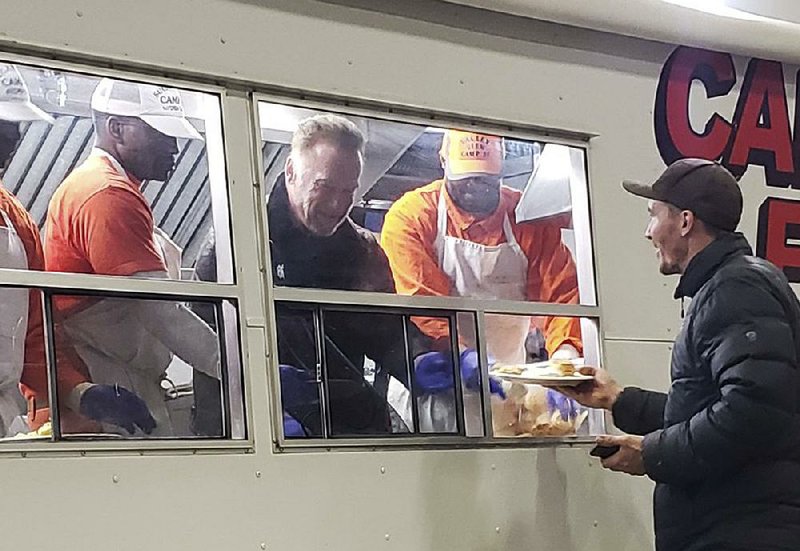 Former California Gov. Arnold Schwarzenegger (center) helps serve breakfast to firefighters Wednesday in Chico, Calif. “I wanted to let you know how much I appreciate all the work that you do,” he said in a brief speech during which he criticized President Donald Trump’s attack on forest management in the state.

CHICO, Calif. -- Light rain falling Wednesday in some areas of Northern California raised the risk of flash floods and complicated efforts to find the remains of people killed in a recent deadly wildfire.

Heavier rain was expected later in the day in the Paradise burn area, where a wildfire has killed at least 81 people and destroyed more than 13,000 homes.

Farther south, residents of communities charred by a Los Angeles-area fire stacked sandbags as they prepared for downpours and the threat of runoff from hillsides left barren by flames.

Forecasters say the rain could cause mudslides and rock slides.

In Paradise, teams searched ash and debris for bodies about 140 miles northwest of San Francisco.

"The task is arduous," said Rick Crawford with the California Department of Forestry and Fire Protection. "And the possibility exists that some people may never be found."

Rain could wash away fragmentary remains and turn ash into a thick paste.

Former California Gov. Arnold Schwarzenegger made a surprise visit to the area Wednesday, providing encouragement to weary firefighters while helping serve them breakfast.

"I wanted to let you know how much I appreciate all the work that you do," he told firefighters during a brief speech.

The 71-year-old actor also slammed President Donald Trump for blaming the wildfire on poor forest management. He told firefighters, "You are tough to not only fight the fires, but you are tough to listen to all this crap."

Authorities working to identify people killed are using rapid DNA testing that provides results in just two hours. The system can analyze DNA from bone fragments or other remains, then match it to genetic material provided by relatives of the missing people.

The technology depends on people stepping forward to give DNA samples via cheek swabs.

But as of Tuesday, nearly two weeks after the start of the inferno, only about 60 people had provided samples for pop-up labs, said Annette Mattern, a spokesman for ANDE, a Colorado company that is donating use of the technology.

"We need hundreds," Mattern said. "We need a big enough sample for us to make a positive ID on these and to also give a better idea of how many losses there actually are."

The National Weather Service issued a flash flood watch for Paradise and nearby communities and for those areas charred by wildfires earlier this year in Lake, Shasta, Trinity and Mendocino counties.

The Camp Fire, which has burned an area about the size of Chicago -- nearly 240 square miles -- was 80 percent contained Wednesday.

In Southern California, people who worried days earlier that their homes would be consumed by flames were taking precautions against possible mudslides from the approaching storm.

Residents filling sandbags at Malibu's Zuma Beach were mindful of a disaster that struck less than a year ago when a downpour on a fresh burn scar sent home-smashing debris flows through Montecito, killing 21 people and leaving two people missing.

The 151-square-mile Woolsey Fire in the Los Angeles area was almost all contained after three people were killed, 1,643 structures destroyed and 364 damaged.

DAMAGE COSTS NEAR $10B

Meanwhile, an insurance risk consultant has pegged financial damage from the Camp Fire at $7.5 billion to $10 billion.

RMS, a risk and analytics firm based in the East Bay, said the cost estimate for the fire includes damage to property and vehicles, business-interruption expenses and the costs of housing the tens of thousands of evacuees.

The firm's estimate provides further indication that the Camp Fire will rank among the costliest fires in California's history. The insured costs from last year's costliest wine country fires totaled $9.5 billion, according to the state Department of Insurance.

The estimate comes as Assemblyman Chris Holden, a Democrat and chairman of the Utilities and Energy Committee, is preparing to introduce legislation that would extend financial protections for utilities by shielding them from billions of dollars in liability linked to wildfires.

Holden plans to introduce a measure that could allow Pacific Gas & Electric and other utilities to pass on to customers some costs related to this year's fires, the San Jose Mercury News reported.

"We want to send a signal to the financial markets that we are not going to leave the utilities flapping in the wind," Kellie Smith, chief consultant for the committee, told the newspaper.

"If a utility goes bankrupt, that will hurt ratepayers a lot more than this mechanism we are creating to make the utility pay until it hurts," Smith said.

It's unclear when the bill might be submitted. A message left for Holden spokesman Garo Manjikian was not immediately returned.

State officials have blamed fallen or sagging power lines and poles for sparking some of California's worst recent wildfires, and Pacific Gas & Electric equipment specifically for 17 Northern California blazes last fall. The utility already has told investors it expects to be on the hook for more than $2 billion in damages.

No cause of the fire has been determined, but speculation has centered on Pacific Gas & Electric, which reported a power failure around the time and place the Camp Fire ignited.

As authorities continue to assess the damage, residents of Paradise have said alerts were few and far between as the fire closed in.

Some learned about the looming wildfire from neighbors knocking on their doors or from frantic cellphone calls from friends. Others looked out their windows and saw the smoke and flames, or heard the chaos of neighbors hustling up children and pets and scrambling to get out.

Matthew White was sound asleep when the fire began raging around his home in Paradise. But somehow he heard his cellphone ring.

It was a friend of his shouting on the other end of the line: "Get the hell up and get the hell out! Paradise is on fire!"

In the frenzied first hours of the Northern California fire, only a fraction of people living in the affected area received alerts or evacuation orders from local authorities. Paradise was already seen as highly vulnerable to fire, with few roads in and out, and with many homes built in forests, not subdivisions.

In the weeks and months ahead, as a final death toll emerges and the scale of the devastation from the Camp Fire sinks in, officials in Butte County and across the state will grapple with the question of whether more people could have been alerted sooner to the raging inferno, perhaps saving more lives.

The decision to issue alerts and evacuation orders rests with local authorities, and as the Camp Fire began Nov. 8, the Butte County sheriff's office decided to use what experts say is an outdated system -- called Code Red -- to notify residents of danger with a phone call.

But only residents who sign up for the service receive alerts -- and only a fraction of them had signed up. The decision not to issue an Amber Alert-style message, a federal government system that could reach all cellphones in the area, was partly out of fear of causing panic and traffic jams on the one main roadway out of Paradise, according to Kory Honea, the Butte County sheriff.

Even without the broader warnings, panicked residents spent hours stuck on the roadway trying to escape to Chico, the city in the valley below, and some died as flames engulfed their cars.

"I understand there are people who say they didn't get enough notice -- I agree," Honea said in an interview this week. "There was not enough notice. We couldn't have given enough notice given the circumstances."

Similar concerns were raised during the wine country fires in Sonoma County in Northern California last year. The Tubbs Fire was briefly the state's most destructive wildfire, with more than 5,500 buildings burned.

Officials there also decided against sending out a mass alert to every cellphone in the region because they feared it would clog up roads for evacuees and for emergency vehicles.

In last year's fire, warnings were sent out to those who subscribed to a police notification system known as Nixle.

"We know from the Tubbs Fire of a year ago that subscription rates are low," said Thomas Cova, a geography professor at the University of Utah who specializes in emergency management. "They discovered in hindsight that they were reaching very few homes."

This was a lesson, he said, that was not applied as disaster unfolded in Paradise.

"It's really disappointing," he said. "You'd think with what happened in Sonoma County, that other counties in California and elsewhere would review their systems and go door-to-door to get everyone subscribed, or whatever it takes."

Cova said it is a myth -- not backed by any research -- that notifying the public immediately at times of disaster, whether it be a wildfire or a hurricane, backfires by causing panic and hampering emergency efforts.

"It's not lack of technology or technological know-how," he said. "There are just these beliefs that warning everyone too quickly is a bad thing."

Information for this article was contributed by Kathleen Ronayne, Olga R. Rodriguez, Christopher Weber, John Antczak and staff members of The Associated Press; by Dale Kasler of The Sacramento Bee; and by Simon Romero, Tim Arango and Thomas Fuller of The New York Times. 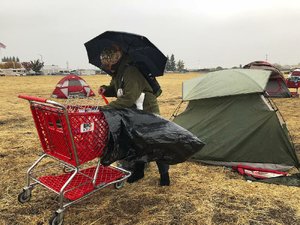 Photo by AP/KATHLEEN RONAYNE
Amy Sheppard packs up her belongings in the rain Wednesday in a Walmart parking lot that’s been a temporary home for people displaced by wildfire in Chico, Calif. Sheppard stayed in the tent for four days with her sister and infant niece, but they were moving to a motel Wednesday to get out of the rain.