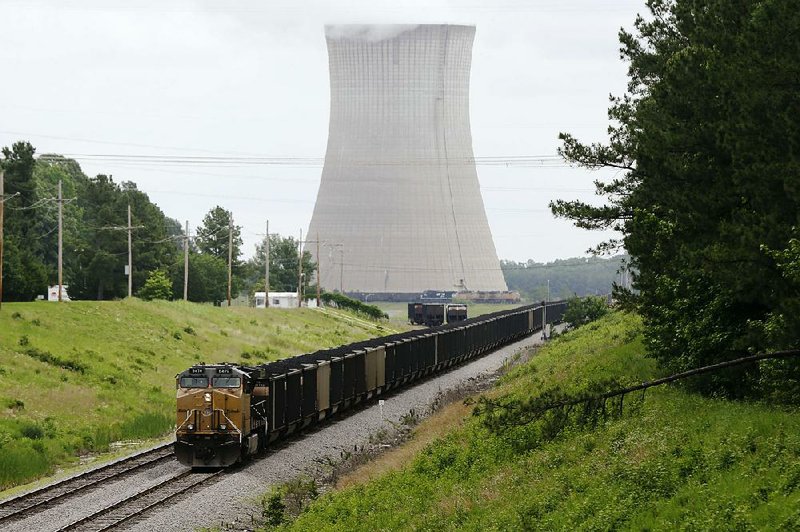 Entergy Arkansas plans to stop burning coal at the state's two largest coal-fired power plants and close one fueled by natural gas by 2030. In the interim, the utility plans to focus on new power-generation sources, mostly renewable energy, the utility said Friday.

Entergy Arkansas' planned phaseout is in accordance with a settlement reached with environmental groups that have long criticized the lack of modern emissions controls at those coal-fired plants.

On Friday morning, the Sierra Club and the National Parks Conservation Association sued Entergy Arkansas in federal court, alleging that the company violated the Clean Air Act when it undertook projects in 2009 at the coal-fired plants without obtaining proper permits. The work resulted in an emissions increase, the complaint says.

Entergy maintains that it had all of the required permits.

The parties entered into a settlement later in the morning. The case is assigned to U.S. District Judge Kristine Baker.

The coal-fired plants, referred to as White Bluff and Independence, are the two largest coal-fired power plants in the nation that lack modern emissions-reducing scrubbers, according to the Sierra Club. However, Entergy has invested in low-nitrogen oxide burners.

Nationwide, natural gas and solar power have become more financially viable power-source options than coal, despite the support for coal power by President Donald Trump and others.

Moving away from coal is something Entergy has sought to avoid but now contends is workable. In recent years, the utility has argued in court and through regulatory public comments of the need to safeguard the Independence power plant.

"If you install the scrubber, you're going to keep the plants running for a long, long time," said Kurt Castleberry, director of planning and marketing operations for Entergy Arkansas. But, replacing the coal-fired plants with renewable energy will cost less than the estimated $2 billion to eventually install scrubbers at both plants to comply with the Regional Haze Rule, he said.

"It's a very good economic deal for our customers," Castleberry said.

Solar costs are lower than ever, he said.

"It's a matter, I think, of being realistic and responsible," Glen Hooks, executive director of the Sierra Club in Arkansas, said in a media teleconference.

The utility says the settlement will ultimately benefit ratepayers because it avoids millions of dollars in legal costs to fight environmental groups and pre-empts the likelihood of paying hundreds of millions of dollars for more emissions controls under the haze rule.

Entergy may still use the coal-fired plants or the Lake Catherine facility as locations for future electricity generation projects, but the utility has not guaranteed it will do so. Future electricity investments will likely be in renewable-energy sources and utility-scale batteries. Natural gas may be a part of that, too, Castleberry said.

"We will build those wherever it makes the most economic sense for our customers," said Alison Melson, a spokesman for Entergy Arkansas.

Environmental groups have long fought the plants and Entergy in legal battles over the plants' high emissions of carbon dioxide, sulfur dioxide and nitrogen oxide. Carbon dioxide contributes to climate change, and sulfur dioxide and nitrogen oxide contribute to haze, ground-level ozone and respiratory problems among sensitive people and can even lead to death.

The prospect of losing the Independence County plant weighs heavily on Newark leaders, who fear the economic impact on the city and on the Cedar Ridge School District.

"Folks will have to start moving out," said Jim Cunningham, mayor of the 1,200-population town.

"It'll be a sickening effect on the town," he said.

The school district receives in property taxes about $2 million above what it's required to under state rules.

If that amount decreases, the state would supplement what the district needs to reach the minimum required spending per student, but whatever the district takes in in extra funds for things like facilities might decrease, Superintendent Andy Ashley said. Utility assessments cover 57 percent of that extra funding, he said.

It's unclear how much utility assessment revenue collected in millage could decline. Entergy Arkansas doesn't plan to sell the property but also doesn't have plans to do anything else with it.

Many families financially rely on the power plant, Ashley said. Others in the community have jobs, such as welding, that rely on contracts with the plant, he said. If people have to move, the school district will get less money from taxes.

"There's really nothing we can do," Ashley said. "Thankfully, it's not next year that it's happening."

Hooks and the Sierra Club contend that the plants' closure will create more renewable-energy jobs.

Solar power is a fast-growing industry in the state and elsewhere.

Job creation is largely because the cost of solar equipment is going down.

Solar costs fell again in 2017, according to a study from the Electricity Markets Policy Group. The median installation price declined from $3.90 per watt in 2016 to $3.70 per watt in 2017 for residential systems.

Together, the coal-fired plants and natural gas-fired plant generate 3,865 megawatts of electricity. For Entergy, which owns only a portion of the electricity generated at each plant, the facilities represent 1,139 megawatts of the utility's 6,621 megawatts of potential power generation. That's about 17.2 percent. But most -- about 70 percent -- of the power the company supplies to its customers comes from the 1,823-megawatt Nuclear One plant in Russellville, which produces no emissions, Castleberry said.

Most of the utility's natural gas-fired generation comes from a 1,988-megawatt plant in El Dorado.

Entergy Arkansas serves more than 700,000 residential, commercial, industrial and governmental customers in 63 of the state's 75 counties, according to the utility's Integrated Resources Plan filed with the Arkansas Public Service Commission last month.

As a part of the settlement, Entergy must ask regulators for 800 megawatts of renewable-energy electricity generation, but 181 megawatts that are already approved by the Arkansas Public Service Commission -- in Stuttgart and near Lake Village -- will count toward that total. At least 279 more megawatts must be requested by the end of 2022.

However the utility proceeds, Castleberry said, he can't say what the impact will be on ratepayers, though he thinks they will pay less than what they could have under Regional Haze Rule requirements.

Arkansas Electric Cooperatives Corp., which owns the other 35 percent of the coal-fired plants, is not opposing the settlement, said Sandy Byrd, a spokesman for the utility. Because Entergy is the majority owner and operator, the cooperatives are not a party to the lawsuit and have no decision-making power in how it's settled.

Byrd said the utility may not have to replace the full megawattage of its loss -- 1,068 megawatts -- because of decreasing electricity demand associated with energy efficiency. That may not the be the case, however, she said, if electric cars become more affordable and common.