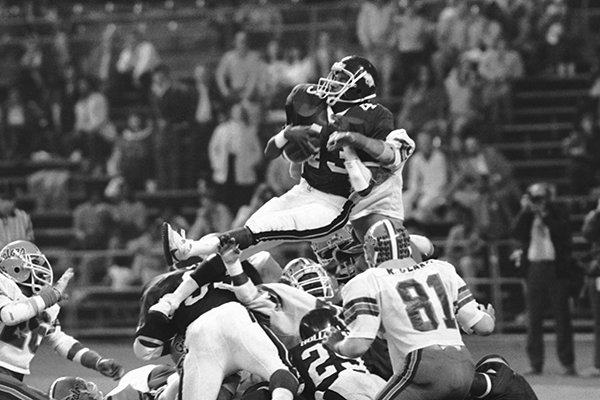 Arkansas' running back Gary Anderson (43) does a sitting act as he leaps from the one-yard line for a touchdown in the third quarter of the Bluebonnet Bowl game in Houston, Dec. 31, 1982. (AP Photo)

When former Arkansas track and field star Reuben Reina learned he was going to be inducted into the Southwest Conference Hall of Fame, he received a text message from a friend who let him know the magnitude of the achievement.

"That reads like a who's who of Arkansas athletes," the text message read.

Reina and eight others were inducted into the Southwest Conference Hall of Fame on Monday at the Embassy Suites in Little Rock. It's the fifth year that the Little Rock Touchdown Club has helped host the conference's Hall of Fame to honor former University of Arkansas athletes.

The SWC was dissolved in 1996, and its property rights were transferred to the Texas Sports Hall of Fame. In 2013, the Southwest Conference Hall of Fame was created.

Arkansas was the only non-Texas school to play in the conference during its heyday. The UA joined the SEC beginning with the 1991-1992 basketball season.

Gary Anderson, an All-Southwest Conference first-team running back in 1982, was grateful to be inducted Monday.

"You go through life and you don't play to go into the Hall of Fame," Anderson said. "You just play to play the game. You want to play the game the right way and hope one day, people identify with what you've done."

Marvin Delph, one of the famed Razorbacks' Triplets in the late 1970s along with Sidney Moncrief and Ron Brewer, won back-to-back state championships at Conway. He paid tribute to his high school coach C.D. Taylor, who was in attendance Monday.

"Even with the flaws and the baggage I had, Coach gave me an opportunity. Without that opportunity, I would have never had an opportunity to play for the University of Arkansas."

At the end of his speech, Delph asked the crowd to pray for former Arkansas basketball coach Eddie Sutton, who is in failing health in Oklahoma.

Lollar, a pitcher and designated hitter at Arkansas in 1977-1978 who played parts of seven seasons in the major leagues, called the 2018 class one that had incredible athletes.

"The University of Arkansas was and is such a great school," Lollar said. "When I first visited the campus and saw the incredible athletic facilities, I knew it was the place for me."

Being an athlete in the Southwest Conference was a dream come true for Webb-Rice.

"The Southwest Conference was all we knew," said Webb-Rice, of Batesville. "It was Arkansas vs. the entire state of Texas. I've seen the plains of west Texas to the skyscrapers of Houston.

"Being from Arkansas and being able to be a Razorback meant the world to me. I'm so grateful that the University of Arkansas recruited me and gave me the opportuinty to play in the Southwest Conference.

"Your team is your family. We all still stay in contact. I am very honored. I feel very special that I'm here."

Also on Monday, Cooper Jones, the Texas Sports Hall of Fame President, announced that former Arkansas football player Loyd Phillips will be inducted into the 2019 SWC Hall of Fame in Waco, Texas, in the spring. Phillips was a two-time All-American selection (1965 and 1966) and only the second Razorback besides Bud Brooks to win the Outland Trophy (1966) given annually to the best college football interior lineman.