UAMS is developing program to teach patients about nutrition 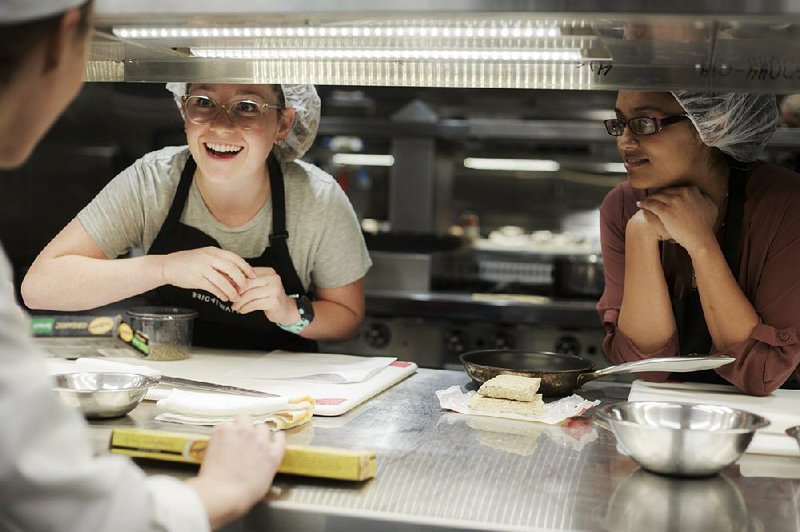 BENTONVILLE -- A chef stood in front of eight medical students, all wearing hairnets as they learned to chop vegetables with their thumbs tucked in to avoid the blade.

"You ready for a wild and crazy diced onion?" Aria Kagan, chef instructor at Brightwater: A Center for the Study of Food, asked the University of Arkansas for Medical Sciences students. Brightwater is Northwest Arkansas Community College's culinary school and is housed at the 8th Street Market in Bentonville.

The students took part last week in a pilot program in culinary medicine. The medical school's Northwest campus is developing the program that uses nutrition to improve health.

"It is where the science of medicine meets the art and the science of food to improve the health of patients that are being seen by medical professionals," said Jonelle Hudson, associate professor at the UAMS College of Pharmacy.

The intent is for medical students to learn more about how patients can incorporate healthy foods into their diets and how healthy food can work to prevent and treat diseases, Hudson said. The curriculum, which is expected to begin in the spring at UAMS Northwest Regional Campus, was developed at Tulane University.

Nursing students at Northwest Arkansas Community College were in a similar program for about a year, said Mark Wallenmeyer, dean of health professions at the school. The community college had a contract with Tulane University's Goldring Center for Culinary Medicine, but no longer offers the program because of budgetary restrictions, Wallenmeyer said. The college may look into starting it up again, though.

"The students loved it," he said.

All nursing classes would go to Brightwater a couple of times a semester and learn recipes that would be good for patients with certain diseases, such as diabetes, Wallenmeyer said.

Angel Holland, director of clinical education at UAMS, said details of how exactly the curriculum will be taught, such as how many culinary medicine classes there would be, are still being worked out. The idea is for it to be an interprofessional program, meaning it would be offered to students regardless of their chosen practice.

The class will be taught at Brightwater, but not affiliated with NWACC, Holland said.

Erin Szopiak, a registered dietitian and chef instructor at Brightwater, started the class by talking with students about the importance of looking at patients' eating patterns and how a fast-paced culture sometimes affects habits.

Kagan showed students how they could infuse spaghetti and meat sauce with more nutrients by mixing brown lentils, celery, onion, bell pepper and mushrooms with the beef.

Kagan was a private chef in Miami for 12 years and said she learned about flavor, texture and technique in culinary school.

"I never learned about what food did to your body," she said.

She returned to school after nutritionists and dietitians kept referring people who had health and dietary concerns.

Kagan said she wanted the medical school students to learn that food is powerful and that one of the best things they can do for patients is ask them what they are eating.

"I think a lot of times doctors take the ability to heal away from the patient. They said, 'Here's a pill. Take this pill and you'll get better,' versus 'What can you do every day to be a part of your wellness journey?' And cooking is a huge part of that wellness journey to take them from a place of disease and illness to wellness," Kagan said.

Kagan added she's not suggesting patients should not take their medicine.

Diet has a significant role in preventing diseases, said Jessica Crandall Snyder, spokesman at the Academy of Nutrition and Dietetics.

"Even just a 10 percent decrease in weight can reduce the risk of diabetes and cardiovascular disease by 58 percent," she said.

A diet high in vitamins can help prevent cancer, she said.

Snyder said diets often focus on cutting out certain foods when people should be focusing on the benefits that come from eating nutritious foods.

Lauren Flannery, a second-year physical therapy student, said she had not learned about nutrition in medical school so far and wanted to know other ways to help patients.

"They come to us with physical problems, but they want to know nutrition-wise what they can be doing," she said.

Sarah Smith, a fourth-year pharmacy student, said she often does nutrition counseling for people with diabetes.

"I don't always practice what I preach and don't really know how to cook, so I wanted to learn for personal reasons how to cook more nutritiously, but also be able to take that back to the patients and give them some options," Smith said.