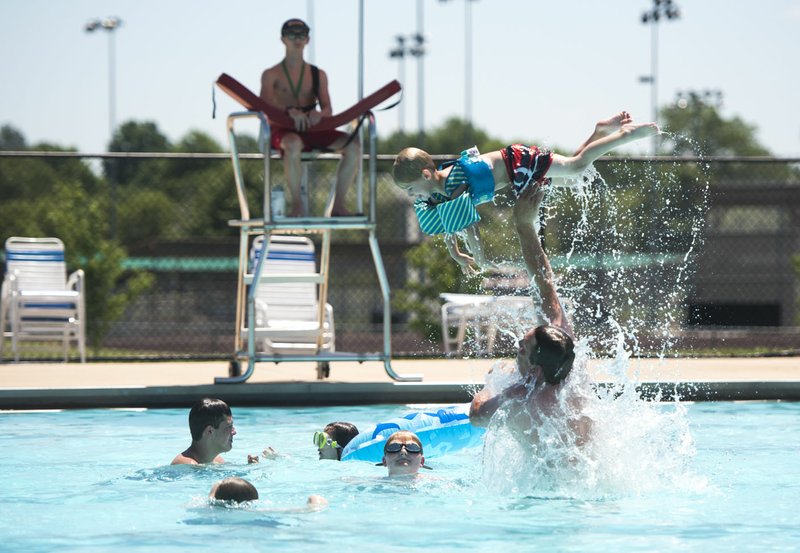 Devan Ferriel of Bentonville (right) flips Kegan Ferriel, 4, Sunday at the Melvin Ford Aquatic Center in Bentonville. The center opened for the season Saturday and will stay open until Labor Day. - Photo by Charlie Kaijo

BENTONVILLE -- Two meetings this week may help direct the future of two Parks and Recreation amenities.

Both meetings will be held at the Community Center, 1101 S.W. Citizens Circle.

The task force was developed after the funding options to repair the failed dam expired. The city had plans to repair the dam, but was met with opposition from Friends of Little Sugar Creek, who advocated for dam removal and stream restoration.

A Walton Family Foundation grant has paid for the research and analysis of three possible solutions that include rebuilding or removing the dam or letting the stream flow past a side channel lake. Officials will present the findings Wednesday.

The three main elements that will be considered for each plan are the recreational use, environmental impact and cost, said David Wright, Parks and Recreation director. 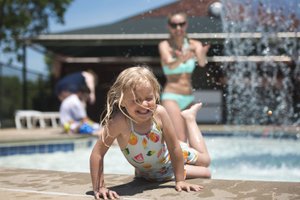 Photo by Charlie Kaijo
Katelyn Jardot, 4, (center left) reacts as Rachel Jardot of Centerton splashes water Sunday at the Melvin Ford Aquatic Center in Bentonville. The center opened for the season Saturday and will stay open until Labor Day.

The Bella Vista Lake task force will hear more about three options for the lake and surrounding park, and the public will have an opportunity to discuss the future of Melvin Ford Aquatic Center.

For more information about either meeting, visit www.playbentonville.com or call the Parks and Recreation Department at (479) 464-7275.

"The budget goes further than just construction," he said. "It's long-term maintenance of the facility."

The group still opposes rebuilding the dam as it believes it to be the "worst possible avenue" in "terms of people, planet and prosperity," Miller said.

Friends still favor dam removal and stream restoration but aren't against the option with a side channel lake, he said.

"It is very important to note that we will always concede and compromise if there is a consensus about what is best for the environment," Miller added.

The public is welcome to attend, but there won't be a time set aside for comments, Wright said. That opportunity will come later when the plans are presented to the Parks Advisory Board in June.

The public is encouraged to provide feedback at a meeting Thursday where the rough draft of a plan for Melvin Ford Aquatic Center will be discussed. The drop-in meeting will be from 6 to 8 p.m.

"It's such a rough draft," Wright said. "We just want you to see the direction that we're going."

The city hired consultant Water Technology Inc. to create a plan for the center. Its officials met with different user groups a few weeks ago to find out what they would like to see at the aquatic center.

Officials want to make sure the ideas are what the general public wants at the facility before designs get too detailed, Wright said.

"The more feedback we get, the better the product will be," said Shara McMurtery, Parks Advisory Board chairwoman.

The aquatic center is an amenity that can be updated in a way that gives more value to all ages, McMurtery said.

The center opened in 1992. Its bathhouse and concession stand were renovated last year.

The Play Bentonville Plan, a plan for the Parks and Recreation Department adopted in the fall, calls for the expansion of the enter with pools with more play value, officials said.

The plan may also but the facility in a position where competitive meets can be held without shutting everything down to the public as it currently has to do, Wright said.