OLD NEWS: Advice columnist published in Arkansas Democrat 100 years ago was Abby of her day 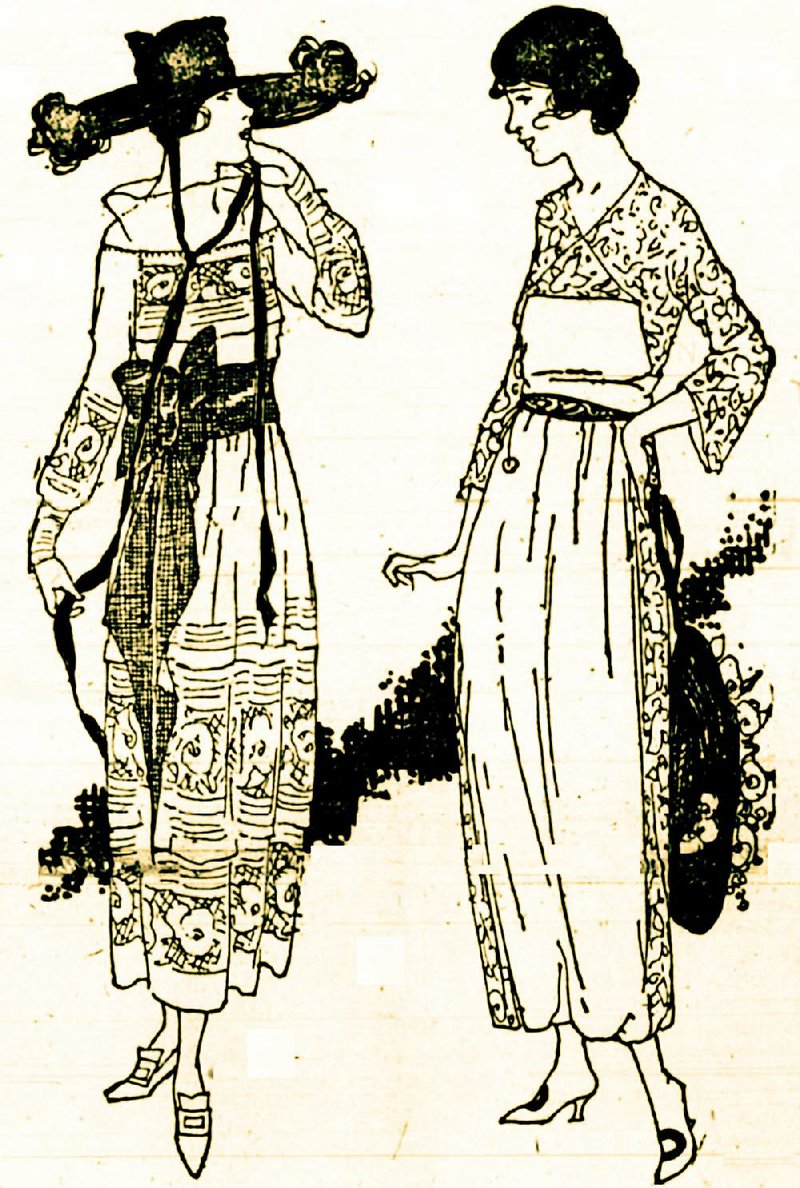 In May 1918, the Gus Blass Co. was selling a special batch of “beautiful voile dresses that are unusually becoming” for $9.90 each, according to the ad in the Arkansas Democrat.

For instance, at what age is it appropriate for young ladies to go out at night without boys?

Dear Mrs. Thompson: Do you think it is all right for girls of 18 and 20 to go to the theatre together at night if they are not escorted by a young man or young men? We are girls who like to have a good time, but we cannot enjoy ourselves much lately because all the boys we know have gone to war. Our parents don't know what to say about our going out together. What is your opinion?

What do you suppose Mrs. Thompson had to say about that on May 28, 1918, in her column in the Arkansas Democrat? What would you say?

And while you mull that over, what about this, from later that week?

Dear Mrs. Thompson: I am a girl of 17. I am in love with a fine young man who loves me, I know, for he has told me so. He left for Chicago several months ago, and about three months later he wrote to me and asked me to come to Chicago, which I refused to do. This, of course, made him very angry.

"Christine K." had written back that she was too young, she was very sorry, and he must stop asking her over and over to go to Chicago.

He wrote and said there was no use to correspond if I was not willing to come. I wrote back and told him if he didn't think any more of me than that he should find himself another sweetheart, but, of course, he hasn't. At last I heard he is always downhearted.

Should Christine write back to him to apologize? In her column Heart and Home Problems, published five days a week by the Democrat, "Mrs. Elizabeth Thompson" (or whoever) replies:

Do not write to him again. You are too young to be in love, and it will be better to forget this boy as soon as possible. Don't worry about his pining for you, because if he pined to any great extent he would write himself. He may have looked tired sometime and his appearance was misunderstood by the person who said he was downhearted.

Here's another good question, from "Husband," who is middle-aged and comfortably settled with his wife of a decade. He is fond of children. Wife is, too, or was until about one year ago.

We had talked about adopting one, but she refuses to do so now. What would be the best to do in this case? It would be fine to have a child to care for and would be lots of pleasure for us both. She would make a beautiful mother if she became attached to the child and realized that it was hers to care for.

Also, he asks, what is the best way to go about getting an adopted child? What aged baby would Mrs. Thompson suggest?

Mrs. Thompson's reply might be good advice, or not.

Since it is your wife who would have the care of the child you cannot adopt one very well unless she is willing to do so. Let her know that you want her to be happy and if she can be happier without a child in the house than with one, you are willing she should have her way. Probably she will see how disappointed you are and then consent to take a child.

You could get a baby from the State orphanage, but this might not be as satisfactory as it would be to get one through a maternity hospital. Very often hospitals are anxious to place babies.

And by the way, he should let his wife select the age. "If she took a new baby she could train it in her way from the beginning and would not have as much difficulty in learning to understand the child."

These items, and several others, including a disturbing recipe for acne-cure cream that involves ether, also appeared in many other newspapers. Scouting Newspapers.com, I found the column published all around the nation and, with a different title ("Personal Problems") in Canada.

Elsewhere on the Internet, a few bloggers and columnists have misunderstood Thompson's appearance in their local newspaper archives as evidence she was home-grown talent. As I have only a theory about who she was, it is possible she did live simultaneously in Winnepeg, Manitoba, Canada; Burlington, Iowa; and Springfield, Ill. I don't know. But her work appeared in many other publications elsewhere, so ...

Certainly Elizabeth Thompson was a pen name. Not only does it appear in 19th-century encyclopedias of pseudonyms used by famous people, but a sportswriter testifying in 1970 before the Canadian Senate's special committee on mass media conceded that the advice column written by "Elizabeth Thompson" and carried by the Toronto Globe and Mail was actually written by someone else. Globe sportswriter Dick Beddoes pointed to that fact while trying to excuse his having in the past ghost-written a column for the Toronto Star that was signed by hockey star Bobby Orr.

Whoever she was, her work was part of a "womens pages" trend among newspapers in the early 20th century. Trying to woo advertising dollars from stores where women shopped, the papers grouped local and national society news with syndicated columns -- advice, recipes, dressmaking, baby pictures, household tips -- on one or two pages or in a fat Sunday section. (Read a bit more about that at arkansasonline.com/52818eye.)

The strongest clue I have to her identity comes from a blog post written in 2013 by novelist Jessica Renshaw, daughter of a Quaker anti-nuclear activist, Barbara Leonard Reynolds (1915-1990). Reynolds was born in Milwaukee. Her father's mother, she says, was Eva Leonard, a syndicated newspaper columnist who wrote under the name Elizabeth Thompson.

According to Renshaw's post, "The Feminist in My Closet," her Nana was published in 200 newspapers during the first World War. Her first effort was "The Wife's Money," a column that advocated respect for wives as economic partners. Later she wrote advice to the lovelorn.

Although she doesn't know how much her great-grandmother earned, Renshaw writes that newspapers paid the syndicate $1.50 a week.

Leonard was 90 years old when she died in 1950 at Madison, Wis. Was she the Democrat's Elizabeth Thompson? I don't know, but I will keep digging. (At press time I had not been able to reach Renshaw.)

But back to poor "Left Behind," who wants to go to the movies even though all the boys are off at war. What does Mrs. Thompson say?

Girls of your age are going out together evenings unescorted. I think it is all right if it is not done too much and if the girls return home at a reasonable hour. Of course it would be better to have an older person along.

Presumably, going out with the boys would be ever so much safer and might even be done more often.

Print Headline: Advice columnist was Abby of her day