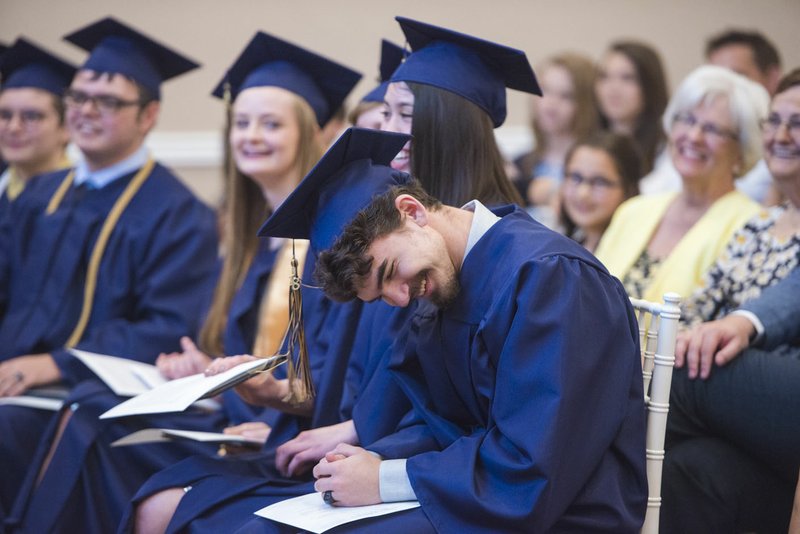 BENTONVILLE -- Students of Northwest Arkansas Classical Academy's first graduating class said they benefited from attending a small school where they got to know their teachers well.

"They know our names, and they know our stories, too," said Emmie Carroll of Bentonville, who will head to John Brown University this fall. "So they kind of have been walking in our lives with us, kind of helping shape who we are when we go through something hard."

The charter school, about to complete its fifth year, checked off another milestone Sunday with its first graduation. Ten students received diplomas during a ceremony at Avondale Chapel and Gardens.

Each graduate plans to attend college this fall. Five are attending the University of Arkansas, Fayetteville. They have received offers of $823,950 in scholarships, according to Lacy Little, career and college counselor.

William Mendoza, who's attending the University of Arkansas, received the Arkansas Governor's Distinguished Scholarship, which pays up to $10,000 per year for tuition, fees and room and board. A student must have earned at least a 32 on the ACT and a 3.5 grade point average to apply for the scholarship.

"They're a really great group of adults now. It's an honor to see them grow and go out into the world and do good things," Little said.

Northwest Arkansas Classical Academy is one of 25 taxpayer-funded, open-enrollment charter schools in the state. It is run by Responsive Education Solutions, a nonprofit organization based in Lewisville, Texas.

The school emphasizes a classical education, which is based on the teachings of Aristotle, Plato and Socrates. Students learn Greek and Latin root words and eventually study Latin. Historical, literary and artistic studies focus on "the classics," math and sciences are taught in a holistic manner, and students engage in "minds-on" learning and character building, according to the school's website.

The K-12 school has about 560 students, but is expecting enrollment to grow into the mid-600s next school year. It opened as a K-8 school in fall 2013 and added a grade level each subsequent year.

Arkansas Department of Education data shows this year's senior class started with 27 students in fall 2013, when they were eighth-graders. That number rose to 35 a year later before gradually decreasing to the 10 who graduated Sunday. Five of the 10 seniors have been with the school since it opened.

Susan Provenza, headmaster, attributed the decline in enrollment in this year's senior class to the wide variety of educational options in the area. It's important for families to find the school that is the best fit for their children, she said.

"Not every kid is going to enjoy the same style of education," Provenza said.

Steven Gast, superintendent of Responsive Education schools in Arkansas, said many students transfer to larger schools for a specific program not offered at Northwest Arkansas Classical Academy. Others want to unite with friends at other schools, he said.

Bryce Horswell, the upper school dean of students, has worked at the school since it opened. He knows the seniors well, and it will be difficult to say goodbye, he said.

"I don't have my own children, so in a way these students are like my kids," Horswell said. "So I take a tremendous amount of pride and satisfaction in who they are."

As the oldest students in a relatively new school, the seniors have been asked to take initiative and show leadership in ways most students at larger, established schools don't have to, he said.

Provenza echoed the family theme. Students in the lower grades made posters and threw confetti for the seniors during their senior walk at the school Friday, she said.

Breann Jones laughs when she recalls being part of the school's theater club when it first started, when she was a ninth-grader.

"There were five kids who had no idea about acting, doing Cinderella for a bunch of second-graders," Jones said.

Jones last month performed in the school's production of The Importance of Being Earnest. She wants to major in fashion marketing and theater performance at the University of Arkansas, according to the school's Facebook page.

"Being part of the building process was great," said Emily Patterson, a senior from Bella Vista. "We got to grow not only as an individual, but we got to grow as a school. We got to make the traditions that will last as long as the school is around."

Patterson transferred into the school from Bentonville High School two weeks into her freshman year. She followed a friend who had transferred as well.

"It has definitely challenged me and forced me to grow as a person and intellectually, which is what I wanted," Patterson said. "The relationships we formed with the staff here, they're amazing."

Megan Palen, whose mother, Cindy Palen, was instrumental in bringing Northwest Arkansas Classical Academy to Bentonville, is one senior who's been with the school since it opened. Despite her mother's involvement, Megan Palen said her parents let her choose whether to enroll.

"I really wanted to go here, and I'm glad I did. I like it a lot," said Palen, who received the Provost Gold Scholarship, worth $68,000, to attend Baylor University.

The seniors had to present and defend thesis projects in front of an audience earlier this year, an example of the school's academic expectations.

Ajax LaCavera, a senior from Bella Vista, said the school has required a lot of dedication, but it's been worth it.

"I think being here, it's going to help me actually be a better person out in the real world," LaCavera said. "I feel like I'm going to be way more prepared for college than other kids, which I really appreciate."