Rights of way a consideration for transportation projects in Northwest Arkansas 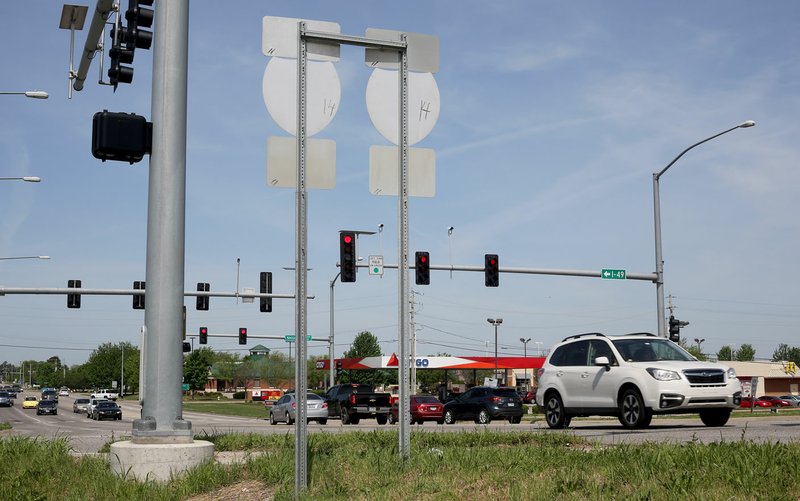 Traffic travels east Tuesday on Wedington Avenue at the Interstate 49 interchange. The Arkansas Department of Transportation has asked Fayetteville to relocate water and sewer lines that conflict with proposed improvements at the interchange. Costs to relocate the lines are estimated at $3.6 million.

FAYETTEVILLE -- Utility lines often get in the way of road projects, forcing the owners of those lines to move them.

The relocation of utilities, such as water and sewer pipes and fiber optic cables, can become a separate project costing millions of dollars. Careful planning and coordination keeps the process standard, officials say.

An estimated $3.6 million water and sewer pipe relocation coincides with an interchange project at Interstate 49 and Wedington Drive. The Fayetteville project serves as the latest relocation effort associated with a major transportation project in Northwest Arkansas.

The $3.6 million figure is an early estimate, with about 10 percent of the cost reimbursable, said Tim Nyander, utilities director for the city.

Lines sitting in the state's right of way have to be moved at the owner's expense, in this case the city. If the Arkansas Department of Transportation wants to expand its right of way, say to widen a highway, then it will reimburse the city for the costs incurred.

Fayetteville crews will need to move 8-inch water and sewer lines north and south of the interchange and replace a 16-inch water main under the proposed widened bridge running east-west. The right of way on the project's scope shakes out to about 10 percent state, 90 percent city, leading to the reimbursable figure.

The item will go before the Water and Sewer Committee, consisting of half the City Council, on May 29.

"We know about their projects years in advance. A lot of times their projects get delayed and delayed," he said. "We always make sure that we have enough money in the account that we pay for these relocations."

The capital projects accounts for water and sewer have about $11 million in them combined. The concept for the I-49/Wedington project was developed about four years ago.

The interchange will get a major rehabilitation, said Chad Adams, district manager for the Transportation Department. Plans include a new bridge with room for pedestrians and bicyclists, as well as a looped ramp for drivers heading east who want to go north on the interstate, he said.

"The road that goes over the interstate there is pretty narrow. It's kind of a long traffic jam," he said. "It's a pretty significant redesign."

Every highway project is unique, and utility relocations can include any variety of combinations of water and sewer pipes, fiber optic cables, electric lines and gas mains. The department works with cities, counties, public works and private companies on the front end to keep costs manageable, said Danny Straessle, Transportation Department spokesman.

For that reason, drivers may see construction work up to two years before the actual highway project work gets going, Straessle said.

Tim Conklin, assistant director of the Northwest Arkansas Regional Planning Commission, said having to relocate what's buried beneath a transportation project is typical.

"At the same time, from project development to actual construction, there may be things that come up that you just don't know until you begin the preliminary design and investigation," he said.

For example, unearthing the ground beneath Rupple Road revealed artifacts from 10,000 years ago. Widening the road was delayed for about a year while excavators worked.

The estimated relocation costs for the Fayetteville project at I-49/Wedington compare in scale to other Northwest Arkansas projects.

Total cost for relocation was about $3.2 million, with the city contributing about $690,000. Construction wrapped last year on the four-mile section of U.S. 412 between Interstate 49 and Arkansas 112.

The Bella Vista bypass project required about $4 million in water and sewer relocation costs, according to Ellen Norvell, Bentonville city engineer. The Department of Transportation reimbursed the city for about $1.4 million, or 34 percent.

Large cities know the drill and plan accordingly, but the department also works with rural municipalities. If a small city or county can't afford the millions associated with utility relocation, a swap can be arranged, Straessle said.

The city of Valley Springs in Boone County and the department worked out such an arrangement in 2013. The department wanted to widen a section of Arkansas 206, which had a $1.5 million water and sewer line relocation cost associated with it. The city would have had to pay nearly $657,000 of the total.

The city couldn't spare the amount, Straessle said. After having the city's water system audited and ensuring it would not qualify for a loan it could pay back, the department offered ownership of Arkansas 396 in exchange for taking on the total relocation cost.

The general process works the same way with private companies as it does cities. Whitney Yoder, spokeswoman for Cox Communications, said the company has a constant relationship with the Department of Transportation.

"They bring everyone together and they have meetings and calls and get everyone on the same page," Yoder said. "There's kind of a chain of command and rules of engagement."