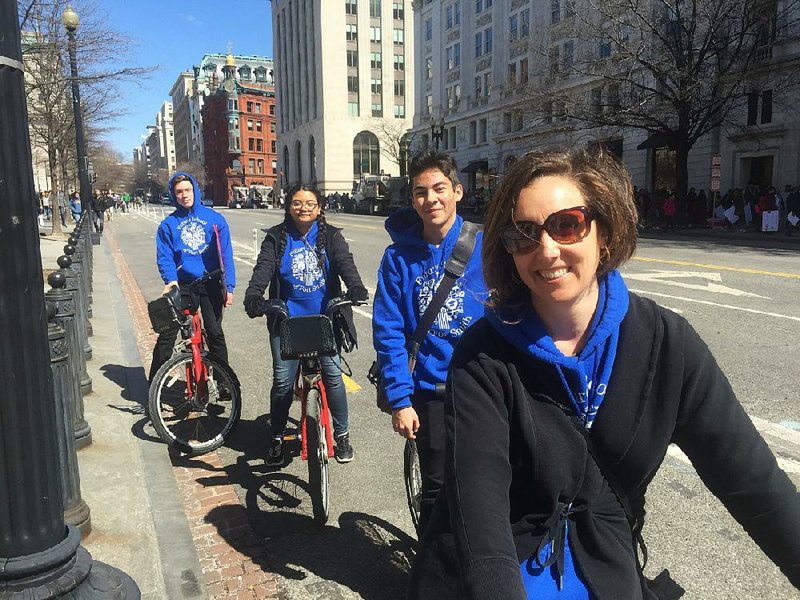 Sebastian Jennings (from left), Elizabeth Gonzalez, Johnny Rose and Allison Montiel ride bicycles toward Pennsylvania Avenue on Saturday in Washington for the anti-gun-violence march. Jennings, Gonzalez and Rose are students at Future School in Fort Smith, and Montiel is an adjunct faculty member at the school. - Photo by Frank E. Lockwood

WASHINGTON -- With the cameras gone from Pennsylvania Avenue and the throngs of protesters who marched on Washington back home, the students of Marjory Stoneman Douglas High School have a new challenge to confront.

After spending the past five weeks grieving classmates lost in a gunman's attack on Feb. 14 at their school and launching a national movement against gun violence, thousands of Parkland teenagers will return to something resembling normal. After spring break this week, classes will resume and the crush of media that followed their every step is likely to disperse to chase the next big story.

But students from the Broward County, Fla., suburb didn't spend the weekend lobbying Congress and leading a huge crowd -- estimates range from 200,000 to 1.3 million -- only to go home and quietly move on. Throughout the weekend, they made it clear in interviews that they have ideas on how to stop gun violence, and that they've only started.

"Marjory Stoneman Douglas kids are the ones who started this. But we're not going to be the ones who finish it. We have so many people who are with us," said senior Emma Gonzalez.

Though opinions on what should be done with gun laws -- and how -- vary widely even among students and Parkland families, and many have started their own organizations to address gun violence and school shootings, the clearest path toward gun control is through voter registration and working with other teenagers around the country. Ryan Deitsch, one of the 18 students behind "March for Our Lives," said the well-funded organization plans to spend its resources on voter outreach and messaging.

"We need to make sure everybody registers, pre-registers and shows up at the polls, because our youth in this country don't vote," he said. "They've been fear-mongered and basically fooled into not voting. And we're tired of this BS."

Deitsch said he and his friends have connected with students in other parts of the country. Two weeks after the attack, they invited students from Chicago to Gonzalez's house to talk to them about their own experience with shootings. On Thursday, they visited students at Thurgood Marshall Academy Washington, where two students have been killed in the past year in off-campus shootings.

Their organization, which as a 501(c)4 nonprofit can spend money politically, had received at least $5.4 million in donations before the march. On CBS' Face the Nation on Sunday, the students said they plan to focus on the coming midterm elections but wouldn't endorse candidates.

The students and other proponents of gun-control measures largely had the Sunday talk shows to themselves.

The National Rifle Association, frequently attacked from the stages of "March for Our Lives" rallies, came up repeatedly. On Fox News Sunday, two students were pushed into a kind of debate, with shooting survivor Cameron Kasky asked to respond to Kyle Kashuv, a fellow student who argued that march organizers had not been honest about their desire to ban "assault rifles."

"We are not trying to take away everybody's guns away, and the NRA wants people to think that," Kasky said. "They are fearmongers. They want to sell weapons by exploiting people's fears. So, the second we want to put common-sense resolutions on these assault weapons, the NRA will say they are trying to steal every single one of your guns, and people believe them. Fortunately, the majority of the American people see past this."

On Face the Nation, Sen. Joni Ernst, R-Iowa, responded to criticism of the NRA's support for her 2014 election, saying she had "no control" over what the group did politically.

"Many outside organizations will run advertisements without the consent of candidates," she said. "So they will do what they want to do. But I will say that I am a supporter of the Constitution, I'm a supporter of our Bill of Rights ... simply stating 'we need to get rid of other people's rights' is not the right way forward."

On CNN's State of the Union, Gov. John Kasich, R-Ohio, did not offer specific gun-safety proposals, but he suggested that the student protesters were right to urge change. Kasich and Ernst were the only elected Republicans to stop by the shows this weekend.

"They got to keep it up," the governor said. "If they don't keep it up, those that want no change will just sit on their hands. They will never come out and say anything. They will just try to stall, stall, stall until the steam comes out of the kettle. And the fact is, if we can keep the pressure on, we're not going to change everything overnight, but you can get significant changes. And I hope so. And if they do not bring about change, I think people should be held absolutely accountable at the ballot box."

In another segment, Sen. Tim Kaine, D-Va., said student energy around gun control could "turn the tide" on the issue and had loosened the NRA's grip on Republican legislators.

"The NRA leadership, funded by gun manufacturers, has basically been able to gridlock everything in Congress now for nearly decades," Kaine said. "That's why Congress has not been willing to act, even to do things that an overwhelming majority of the American public want us to do, but the activism in these young people is actually changing the equation."

For students like Deitsch and Gonzalez, returning to the life they knew before the shootings would probably be impossible. Their faces are now internationally recognized.

But there are thousands of students at Marjory Stoneman Douglas High School, and their futures and plans crisscross and diverge in many directions. Many are still planning for prom and applying to college. They may be activists with a heavy burden, but they're still teenagers.

In the days leading up to the march, senior Aly Sheehy, 18, said that what she had been most excited about was the prospect of spending a few days on a trip with her friends. Under ordinary circumstances, Friday -- which many Parkland students spent lobbying lawmakers -- would have been the start of spring break.

"I was so excited to spend this amount of time with my friends and just hanging out with each other and just not having any obligations to do because it's also our spring break," she said Saturday morning at a hotel in Arlington, Va.

Since the shooting, the simple act of getting up in the morning and going to class had become a challenge, Sheehy said. "Now, I don't feel safe going to school," she said. "I don't feel comfortable going, and it's something like every day I kind of have to drag myself."

Jalen Martin, a 17-year-old senior, said "a lot of us are graduating. We're going to go off to college." But he figures they'll continue their activism through new groups, expanding their cause to universities around the country.

On the morning before the "March for Our Lives," the Parkland students were already thinking about their next steps.

Sophomore Nicolas Fraser, 16, wore a Gun Safety Voter shirt -- "Future voter," he said -- as he ate breakfast at the hotel alongside his friend Ashley Baez, 15, who was still recovering from being shot in the leg.

"It's definitely bigger than what we thought it would be," Fraser said, referring to how quickly the #NeverAgain movement had grown. "Democracy, it's about the people, so the government won't be able to hold out [on gun control] much longer, especially when kids are able to vote."

He thought it was also important to "keep communicating" with students from around the country. "This is not going to take a week," Fraser said.

Senior Ariel Braunstein, 18, said the shooting and the movement it spawned would drive students to vote. "If anything has kicked us into high gear to do so, this has," she said.

Stoneman Douglas students are focused on turning their social movement into a political one because they know that Congress, as currently composed, is unlikely to support the change that most are seeking. Over and over this weekend, they were reminded how remarkable it was that the House and Senate approved legislation funding school safety projects and encouraging a stronger background check system -- legislation too weak to satisfy the students.

Waiting outside a Senate office building Friday morning in an overcoat, student Demitri Hoth said young people will make sure that politicians who don't support their cause "have no future."

But not everyone from the school agrees with that position. Two hours into Saturday's rally, Stoneman Douglas sophomore Zach Cooper, 16, said he thought the rhetoric of the movement had become counterproductive. "They're saying it's not about politics," he said, but he felt that it clearly was.

Cooper said he also didn't agree with the sharp attacks leveled at Republican politicians, who had been booed by the crowd. "I think, have a little more respect for them," he said, adding that if the students continued to lambaste Republican lawmakers, they were less likely to get a compromise on gun control.

Andrew Pollack, father of shooting victim Meadow Pollack, released a Facebook video Saturday saying his son wanted to speak at a "March for Our Lives" event but was denied because he didn't share the same views. Ryan Petty, who lost his daughter, Alaina JoAnn Petty, said on Twitter on Sunday morning that his daughter's memorial in Parkland had been politicized by marchers, who planted political posters around flowers and pinwheels.

Information for this article was contributed by David Smiley and Kyra Gurney of the Miami Herald, and by David Weigel and Drew Harwell of The Washington Post. 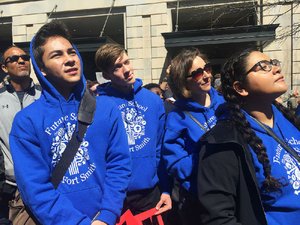 Photo by Frank E. Lockwood
Johnny Rose (left), Sebastian Jennings, Allison Montiel and Elizabeth Gonzalez of Future School in Fort Smith listen to one of the speakers on a giant screen at the anti-gun-violence march Saturday in Washington.